A man plays guitar behind the electoral poster of Gordana Siljanovski, candidate of opposition VMRO DPMNE in the center of the capital Skopje, North Macedonia, on 2 May 2019. [Georgi Licovski/EPA/efe]

North Macedonia goes to the polls on Sunday (5 May) in a presidential run-off vote that will be a litmus test for the pro-Western government, which has warned low turnout could invalidate the vote and trigger a general election.

The first round of voting last month was a tie between the candidate favoured by the ruling Social Democrats and his right-wing rival, reflecting a deep divide in the Balkan state, particularly over the country’s historic name change. 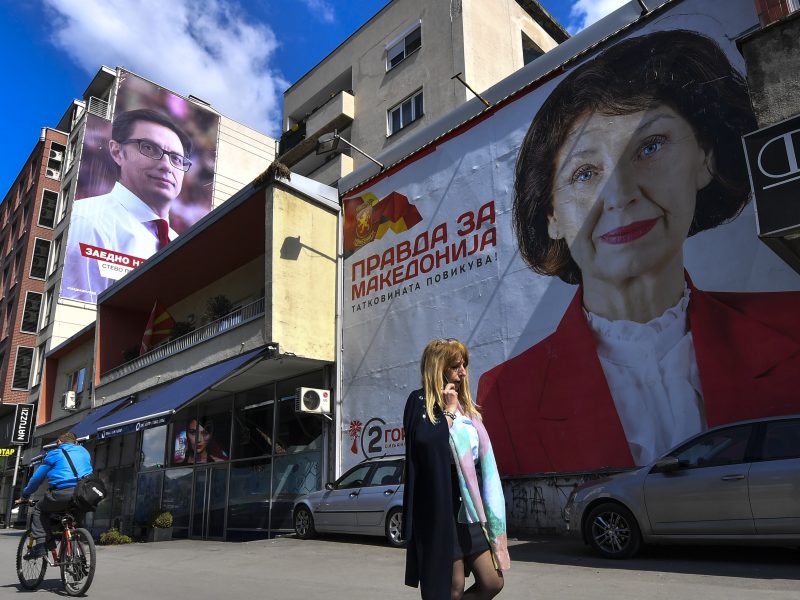 The presidency is a largely ceremonial post, but the poll is seen as a referendum on Prime Minister Zoran Zaev’s centre-left government, which recently finalised the controversial deal to add “North” to Macedonia’s official name and end a long-running dispute with Greece.

The ruling party’s preferred contender, 56-year-old Stevo Pendarovski, is a strong backer of the name deal and has cast himself as the pro-Western candidate who will join Zaev in bringing North Macedonia closer to Europe.

His nationalist-backed rival Gordana Siljanovska-Davkova, a law professor who would be the country’s first female president if elected, is highly critical of the change. She has framed her campaign around tackling weak rule of law and corruption.

But in addition to taking a majority, the candidates are pressed with drawing high enough turnout to clear a legal threshold.

More than 40% of the Balkan state’s 1.8 million electorate need to cast ballots to validate the poll, a margin that was barely passed in the first round of voting last month.

If enthusiasm dips any further, it could hand a political crisis to Prime Minister Zoran Zaev.

According to the premier, the country would have to either restart the election process or make constitutional changes, such as allowing parliament to choose the president.

A failure to reach the turnout threshold — or a victory for Siljanovska-Davkova — would also trigger snap parliamentary elections, Zaev has said.

But the premier remains optimistic about hitting the turnout target, saying in TV interview this week: “We believe that citizens will elect a president”.

Some new voters may be motivated to head to the polls to avert more turmoil in a country that lurches from political crisis to crisis.

“I did not vote (in the first round)… but now everyone says there will be a crisis if we don’t elect president, so I’ll just do it,” said Jana Damjanovska, a 27-year-old Skopje resident.

The country’s name change was a compromise to end a decades-old row with Greece, which has a province called Macedonia and has never accepted its northern neighbour’s use of the name.

In return, Athens promised to stop thwarting Skopje’s efforts to join NATO and the European Union.

But that is just one of a range of issues concerning voters.

Petar Arovski, an analyst in Skopje, said the record low turnout last month reflected “dissatisfaction with rule of law reforms, the fight against corruption and the poor economy”.

More than a fifth of the country is jobless while average wages are stuck at around €400 a month, helping fuel waves of emigration abroad.

In 2018 GDP growth was 2.5%, the lowest figure in the Western Balkans region according to the World Bank.

The presidential candidates are also vying for votes from the country’s ethnic Albanian minority, which makes up around a quarter of the population.

The Albanian candidate fell out of the race after the first round.