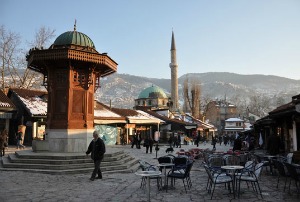 Thousands of protestors blockaded parliament in the Bosnian capital Sarajevo yesterday (6 June), venting anger over a political dispute over ID numbers that has left the country unable to register newborn babies for months.

The protestors, mainly students and young parents with babies, surrounded the assembly, held back by police and preventing anyone except journalists from entering or leaving the building.

There is public fury over the failure of lawmakers from the country's rival Serb, Croat and Muslim communities to agree on how to draw up the districts that determine the 13-digit identification numbers assigned to every citizen.

Without a deal, a court ruling effectively froze registrations in early February, meaning newborns cannot be issued with passports or the medical cards they need to be seen by a doctor.

The row is one of the most egregious examples of the ethnic politicking that has plagued Bosnia since the end of its 1992-'95 war, which left the country with a weak central government and a system of ethnic quotas that has stifled development.

The deadlock meant that one three-month-old baby was denied travel documents for an urgent stem-cell transplant in Germany.

On Wednesday, the government reached an interim deal to resume issuing identification numbers for the next six months, until a long-term agreement is reached.

But the protestors were unimpressed and called for a permanent settlement. They blew whistles and carried banners that read: "Take responsibility. This is what you wanted," and "You cannot secure even a number, let alone a better future".

Bosnia's autonomous Serb Republic threatened to send its own special police forces to the building to intervene, raising the risk of violence.

The Bosnian Serbs are pressing for a new registration arrangement that would reflect the territorial lines set down under a peace deal to end the war and which split the country into two highly autonomous regions.

The Muslims, known as Bosniaks, say that would only cement the ethnic divide.

"Yesterday's protest was a clear demand on elected officials in Bosnia and Herzegovina at all levels to do what they have been elected to do - work in the interests of the citizens. This is a time for leaders, politicians and civil servants to recommit themselves to serving the citizens as their first priority. First and foremost a permanent solution to the issue of the single reference number must be found and efforts to complete this must be accelerated.

"I was struck yesterday by the common purpose of the citizens, from many walks of life and backgrounds, and I note the expressions of support that came from around the country. Citizens sent a clear message, that must be understood, that the business of good governance should come first, not special interests or partisan politics."

The European Commission presented on 10 October 2012 the progress reports on the countries on their way toward EU accession, including Bosnia and Herzegovina.

The big laggard in the group was Bosnia, where the Commission noted that governance reforms are stalled and that the main ethnic entities - Serbs, Croats and Bosniaks - lack interest in pursuing a common future.