Serbian President Aleksandar Vučić is travelling to Washington this week for talks between Belgrade and Priština in the hope of discussing the economy while Kosovo Premier Avdullah Hoti insists that mutual recognition is the only topic he can discuss with Serbian officials.

However, Vučić also says he expects the 4 September meeting in Washington to throw a surprise in the form of a demand for mutual recognition of Serbia and its former province, Kosovo. The meeting is organised by the US president’s special envoy for Belgrade-Priština dialogue, Richard Grenell.

Vučić told the Bled Strategic Forum in Slovenia on Monday (31 August) he is aware that Serbia must cooperate with the Europeans and the Americans where Kosovo is concerned. He also said that political status would be discussed under the EU’s auspices, while economic issues would be under US auspices.

According to some announcements, if the talks make quick headway, US President Donald Trump might also take part in the meeting. Analysts say a good result of the meeting would be a small foreign policy boon for Trump, who is gearing up to try to win another term in office in the presidential election in November.

Vučić cautioned that if Washington demands  mutual recognition of Serbia and Kosovo he would refuse to meet with the US president.

Vučić also said Serbia had received the official agenda for the talks where “just one item was unacceptable,” but did not specify what it was.

The head of Serbia’s ‘Office for Kosovo and Metohija’, Marko Đurić, has announced that Belgrade’s negotiating team will come with concrete projects for economic connectivity, proposals for infrastructure projects, support for youth, farmers and business people of all nationalities in Kosovo.

Đurić also said that the Serbian delegation in Washington would aim to “avoid drawing Serbia into the geopolitical games of the great powers.”

In an interview with Happy TV, Foreign Minister Ivica Dačić said creative solutions in the interest of both sides should be sought in the Belgrade-Priština talks because “the current situation on the ground is unconstitutional, given that Belgrade does not have its entire territory under control, nor does Priština.”

Meanwhile, Kosovo’s Prime Minister Hoti stressed the continued commitment of Kosovo – currently the last in the queue of Western Balkans EU hopefuls – to dialogue because it was “a European country with a clear Euro-Atlantic orientation.”

However, he added that for him the only topic was “reaching an agreement on mutual recognition, without jeopardizing the territorial integrity of Kosovo.”

Representatives of Kosovo and Serbia will meet at the White House on Friday. After that, a new round of expert-level dialogue is scheduled two days later in Brussels, while top-level political talks are planned for 7 September, with the participation of the Serbian president and the Kosovo premier.

The meeting of Kosovo and Serbian officials in the US was initially planned for 27 June but was postponed after the Specialist Prosecutor’s Office in The Hague announced it had filed a draft indictment against Kosovo President Hashim Thaci and Democratic Party of Kosovo leader Kadri Veseli.

Belgrade and Priština have talked for years under EU auspices about normalising relations and reaching a comprehensive agreement,  a requirement for their progress towards European integration. Meanwhile, Belgrade has also hinted at building closer relations with Russia and China. 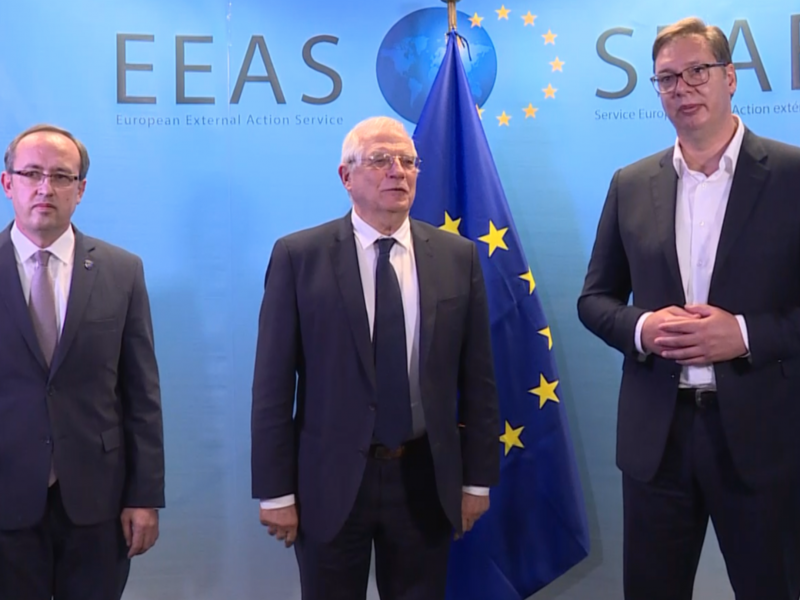 Former war foes Serbia and Kosovo restarted talks in Brussels on Thursday (16 July) as the EU urged them to compromise to normalise their strained relationship.

After a long standstill caused by Kosovo’s imposing import tariffs on Serbian goods, as well as by changes of government in Kosovo, the talks have resumed and are now mediated by the EU special envoy for the Kosovo-Serbia dialogue, Slovak diplomat Miroslav Lajčak.

The EU has hinted that it would also welcome any positive development that could come out of Washington’s initiatives.