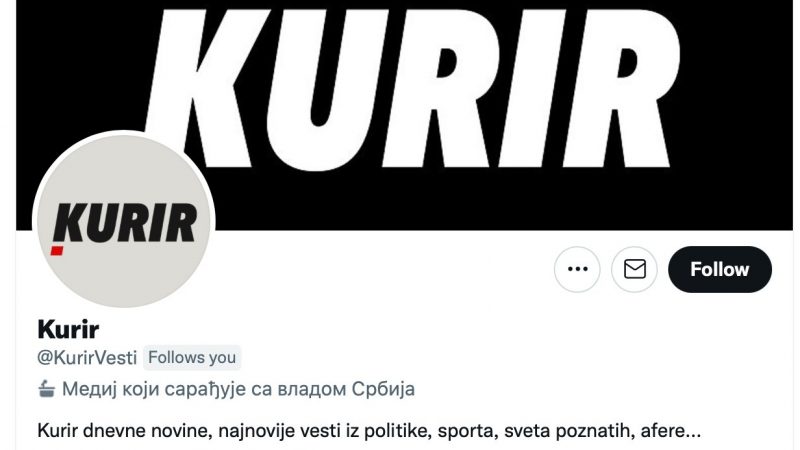 The tabloid Kurir is one of the media tagged by Twitter as "media which cooperates with the government of Serbia". [Twitter]

Serbian President Aleksandar Vučić has compared himself to Donald Trump as a politician victimized by Twitter, after the social media took the decision to tag many of the media organisations which support him as “pro-government”.

“I can’t wait Twitter to switch off my account to become another Trump, said Vučić, as quoted on Tuesday (17 August) by the Serbian Radio and Television RTS, after Twitter started tagging pro-government media profiles in Serbia as “Media cooperating with the Serbian government”.

Vučić also attempted to hit back at Twitter for not labelling as pro-government The Voice of America or the BBC, which he said are paid by the respective governments of the US and the UK, while in his words most of the media tagged in Serbia were not financed by the state budget.

Twitter explains that labels on state-affiliated accounts provide additional context about accounts that are controlled by certain official representatives of governments, state-affiliated media entities and individuals closely associated with those entities.

“State-financed media organizations with editorial independence, like the BBC in the UK or NPR in the US for example, are not defined as state-affiliated media for the purposes of this policy”, Twitter says.

Twitter’s decision proves that the problematic situation between political power and the media in Serbia has reached “planetary proportions,” said Professor Rade Velyanovski of the University of Belgrade, as quoted by Danas, an independent newspaper.

Velyanovski adds that Serbians, “know very well that the government has stuck to power for years, using a large number of media, including the largest and most influential”.

“This could not go unnoticed for people who are not from Serbia. We should not be happy about this. It is good that Twitter has noticed that something is wrong here, but it is not good that the phenomenon has become so large that even Twitter has had to react in some way”, Velyanovski said.

Newsmax Adria director Slobodan Georgiev commented that Twitter saw what Serbs had known for ten years, namely that “these are not media, but propaganda.”

“Now the whole world sees what we have been talking about for a decade, and now let these media try to prove that they are not connected with the Serbian government,” Georgiev said.

You will not find reports about the mass protests in the pro-government media in Serbia, Deutsche Welle wrote in a comment on the media situation in the context of protests against Vučić in 2019. At that time, dozens of demonstrators stormed Radio Television Serbia, a symbol of the government control on major media.

The tabloids loyal to the government described the protesters as a “crowd full of hatred.” According to them, the demonstrators were bought by the opposition to undermine the country’s upward development.

However, a journalistic investigation by the independent media blog showed that in just one year, three newspapers – Informer, Srpski Telegraf and Alo – published 730 lies on their front pages.

In Serbia, tabloids do not write as much about show business or celebrities, but rather instigate hate and target the opposition, media blog author Vesna Radojevic said.