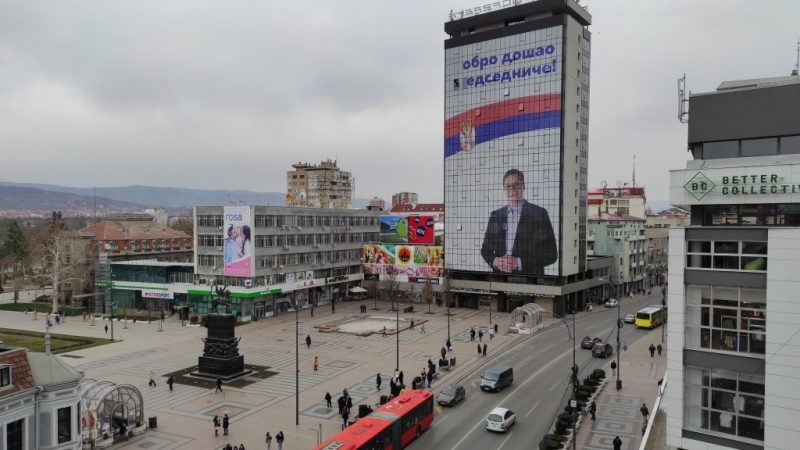 *The author initially contributed this article to EURACTIV Bulgaria.

In Serbia’s predominantly Russia-leaning public space, aligning with the bloc as an EU candidate country is not a popular political message ahead of the parliamentary, presidential, and Belgrade elections on 3 April.

Russia’s invasion of Ukraine took place amid Serbia’s election campaign. Since the start of the war, Serbian President Aleksandar Vučić has tried to cautiously balance between the West and East, prompting many in Brussels to warn that he cannot continue sitting on the fence.

Serbia, which has been negotiating for EU membership for eight years, is the only country in Europe besides Belarus that has not joined the EU sanctions against Russia.

While mass rallies of support for Ukraine were held across Europe, a massive protest in support of Russia took place in Belgrade, confirming Serbia’s traditional ties with Moscow. 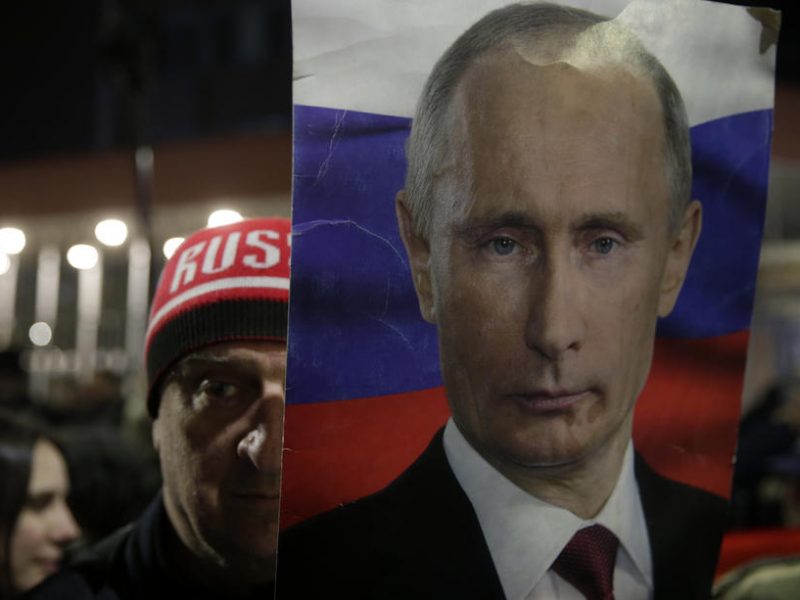 Thousands of Serbs march in support of Russia in Belgrade

Thousands of Serbs waving Russian flags and carrying pictures of President Vladimir Putin marched through Belgrade to the Russian embassy on Friday (5 February) in a show of public support for Moscow after it invaded Ukraine.

Although the authorities in Belgrade continue to say Serbia will not join the EU sanctions, the latest developments in which Serbia chose for the first time a symbolic sanction against former Ukrainian President Viktor Yanukovych suggest that Serbia will probably choose from the “menu” of the already adopted EU restrictive measures against Russia picking the ones that cause the least damage to its good relations with Moscow.

First alignment with EU over Ukraine from 2014

Since Russia annexed Crimea in 2014, Serbia has not adopted any of the EU’s related foreign policy positions or restrictive measures against Russia.

However, this month, Serbia aligned itself for the first time with an EU measure concerning the crisis in Ukraine. It related to 2014 and a decision by the EU Council to extend sanctions against Yanukovych and other representatives of the then Ukrainian leadership.

After the Euromaidan revolution and fall from power in 2014, Yanukovych fled to Russia, and according to media reports, he is now a Russian. The EU imposed sanctions on Yanukovych in 2014 for “misuse of state resources and human rights violations.”

Although it seems that this EU measure is the mildest at first glance, the decision of the authorities in Belgrade is significant because Serbia has stood aside so far.

Apart from the people’s traditional warmth towards Russia and Serbia’s dependence on Russian energy sources, Belgrade was building close ties with Moscow because it counted on political support in the Security Council over Kosovo.

Russia and China are the only countries in the UN Security Council that do not recognise the independence of Kosovo, declared in 2008.

Away from the public eyes

The alignment with the EU restrictive measure against Yanukovych was kept low key. It was announced on the EU website on 12 March, but the Serbian public only found out about it after European Western Balkans reported the news three days later.

When the pro-government media carried this news, they did not say it was Serbia’s first alignment with the EU policy over Ukraine.

This is not the first time that the authorities in Belgrade have secretly harmonised with an EU decision in the field of Common Foreign and Security policy. The same thing happened when Serbia joined the condemnation of the Belarusian regime in the summer of 2020.

The news only became public after the Dutch embassy in Belgrade said it welcomed this decision. Serbia’s Prime Minister Ana Brnabić then stated that Serbia had joined in the condemnation but voiced hope that the president of Belarus, Alexander Lukashenko, would not blame Serbia for that.

Last year, Vučić emphasised that the harmonisation of his country with the foreign policy was raised from 46% to 62%, which in his words, “fulfilled the promise” of Serbia. 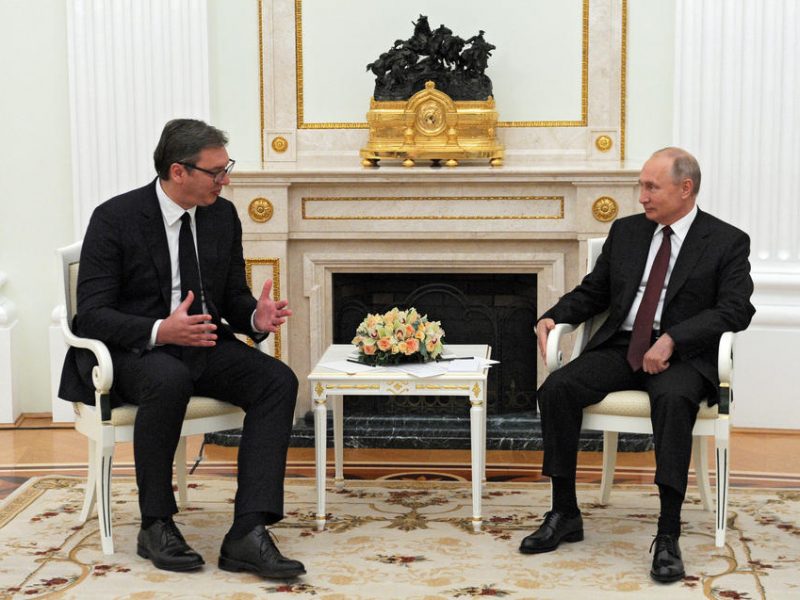 According to the ISAC Fund, a think-tank based in Belgrade, from 1 January to 31 December 2021, the European Union issued 85 foreign policy declarations asking the candidate countries and partner countries to comply, and Serbia harmonised with 52 of them.

This percentage is an absolute low for a Western Balkans country. In comparison, Albania and Montenegro were fully aligned, with North Macedonia at 96% and Bosnia and Herzegovina at 70%.

Since Putin started his war in Ukraine, it seemed that the maximum Belgrade was ready to offer was support for the UN General Assembly Resolution and for the declaration of the EU top diplomat Josep Borrell of 22 February, which “strongly condemns” Russia’s decision to recognise the independence of Donetsk and Lugansk as independent republics.

Alignment with Borrell’s declaration was essential because Serbia’s attitude towards these documents is monitored in Brussels and included in the final percentage of Serbia’s compliance with EU foreign policy, which is necessary for progress towards EU membership.

Since the beginning of the Russian invasion of Ukraine, Brussels has said that Serbia is expected to pick a side and that if it is the wrong one, there will be a price.

A group of liberal lawmakers in the European Parliament went a step further and formally asked the European Commission to temporarily suspend accession talks with the Serbian government and deny financial support due to Belgrade’s decision not to join sanctions against Russia.

Vučić’s explanation was, “Serbia will not rush into hostilities because someone asks it to”.

According to analysts, the government in Serbia is trying to buy time until the elections. In their view, the period after 3 April will be crucial for Serbia’s future relations with both Russia and the EU. 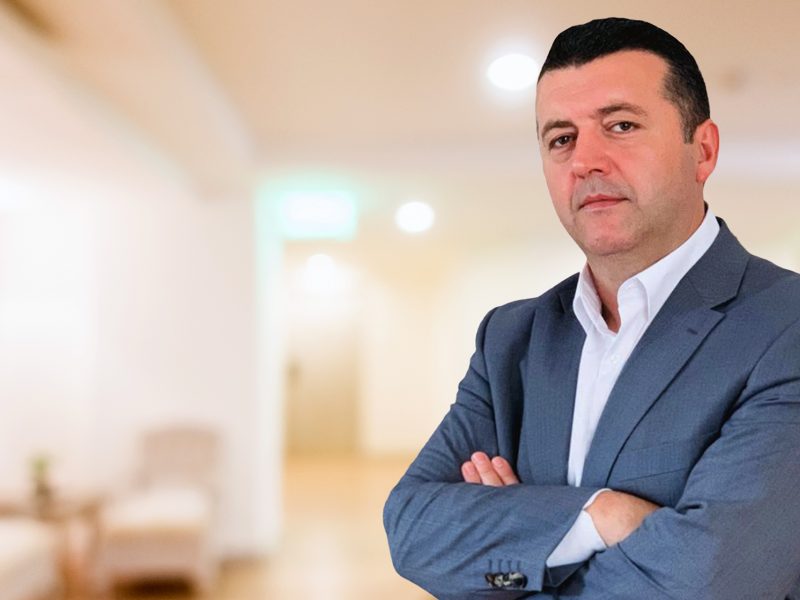 Analyst says if Putin was a candidate in Serbia, he would get over 70% of the vote

Serbian President Aleksandar Vučić knows that “Russia has become completely useless for Serbia”, but he will keep up his pro-Putin rhetoric to please his electorate in the run-up to the elections on 3 April, says Orhan Dragaš, a security expert in Belgrade.