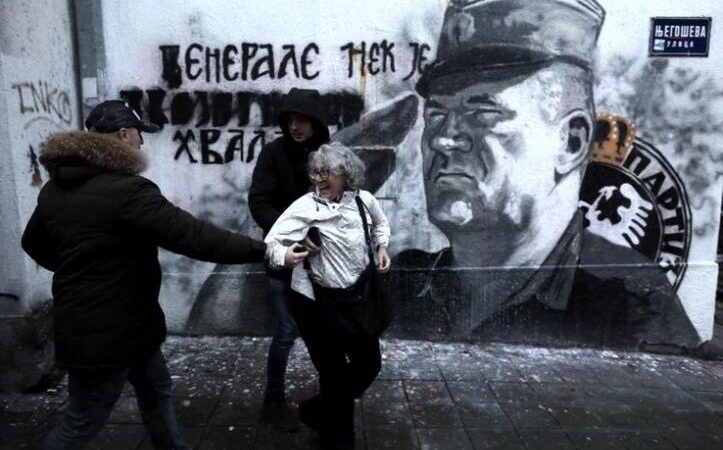 A video posted on an Instagram profile showed plainclothes men who identified themselves as police officers, whisking away Aida Ćorović, after she threw eggs at the wall painting depicting Mladic saluting and wearing his officer’s cap.

“This outrage tonight is the face of (Serbia’s President) Aleksandar Vučić’s regime,” the Belgrade-based N1 TV quoted Ćorović as saying after she was released from a local precinct.

Corovic’s detention prompted protests by dozens of opposition and leftist activists and riot police cordoned off the area near the building with the mural.

The Serbian opposition has frequently criticised Vučić, a former nationalist who later adopted pro-European policies, as well as his allies, of autocracy, stifling media freedoms, attacks on opposition, corruption and ties with organised crime. Vučić and his allies have denied that.

In a statement, Serbia’s Interior Ministry said the police were enforcing public order and an earlier ban on all public gatherings related to the wall painting of Mladić.

“Henceforth, identification of all persons regardless of their views about the mural depicting Gen. Ratko Mladic is being made,” it said.

Mladic, 78, led Bosnian Serb forces during Bosnia’s 1992-95 war and was convicted by the United Nations war crimes tribunal for genocide and war crimes, including the killing of more than 8,000 Muslim men and boys in the eastern town of Srebrenica in 1995.

But many in Serbia, a candidate for membership in the European Union, including some prominent politicians, still see Mladić as a hero of the war in which more than 100,000 people died.

Serbian police have banned the removal of a mural from the wall of a residential building in Belgrade of Bosnian Serb war-time military chief Ratko Mladic. It reads
"General, eternal gratitude to your mother" (for giving birth to you) The words are taken from a Serbian song. 🇷🇸 pic.twitter.com/OswwKAIo1k