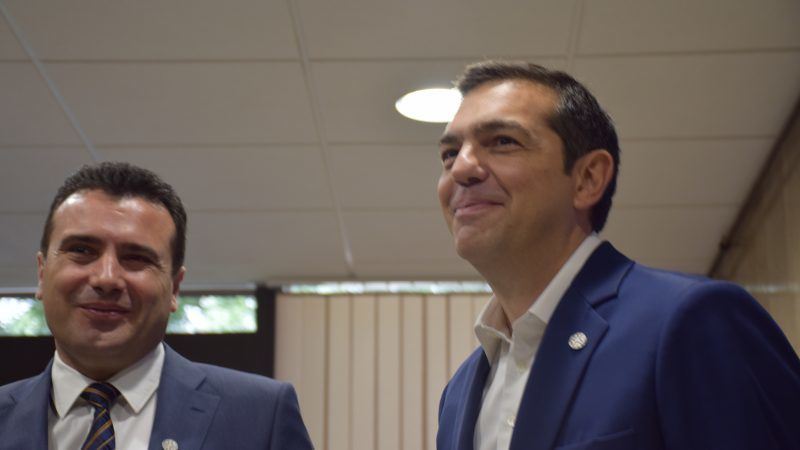 Zoran Zaev with Alexis Tsipras before their bilateral meeting in Sofia. [Sarantis Michalopoulos]

Tsipras and his counterpart from the Former Yugoslav Republic of Macedonia, Zoran Zaev, met in Sofia on the sidelines of an EU-Western Balkans summit. Greece opposes the name Macedonia because it has a province by the same name, and the dispute has been deadlocked for more than 25 years, blocking Macedonia’s progress towards NATO and EU membership.

Bulgarian Prime Minister Boyko Borissov, who hosted the summit, hinted that there had been real progress in the Greece-Macedonia talks but said that both leaders would make announcements in their capitals, not abroad, when the time comes.

Speaking at a press conference, Tsipras said he aimed to meet Zaev again in early June, but there would be other steps to take in the meantime.

“We have reached a critical point but the last steps are always more difficult,” Tsipras underlined.

“We have the pressure of historical responsibility but FYROM has the pressure of time,” the leftist leader said, referring to Skopje’s ambitions to join the EU and NATO.

“We were discussing many options and we agreed on one that is acceptable to both sides,” said Zaev.

Tsipras was more cautious, saying the two were “not yet in a position” to announce a deal to end the 25-year row, but conceding they were much closer to resolving it.

Both sides wanted to have a result before the General Affairs Council in June.

He explained that the aim of both sides was a deal that will be embraced by the people, stand the test of time and respect the cultural heritage and history of both sides.

Asked by EURACTIV.com if they had discussed the stance of opposition parties’ in both countries on the issue, he replied, “Of course, it’s a critical issue”.

“Not so much for us, but for the domestic affairs of our neighbour, as our position requires a constitutional change [in Macedonia] which needs qualified majorities. So yes, it was one of the points of discussion between us,” Tsipras emphasised.

EURACTIV reported in January that Macedonian opposition party VMRO-DPMNE of former Prime Minister Nikola Gruevski was trying to block talks. As prime minister, Gruevski had taken a hard line on the issue and negotiations were frozen for many years.

A former minister who belongs to VMRO-DPMNE told EURACTIV in January that Zaev’s government “shows flexibility to impress their neighbours but in the long run, they have to have public opinion on their side as well”.

On the Greek side, Tsipras welcomed recent supportive statements by Kyriakos Mitsotakis, leader of the centre-right New Democracy.

“Cooperating at least on national issues will help the country,” Tsipras said.

Speaking at a separate press conference after the summit, Zaev voiced hope for a solution before the June summit but added that “if this not the case, we won’t stop there”.

“Together with Prime Minister Tsipras, we looked at possible options for creative solutions, which the Macedonian side presented in the last phase of the negotiations. What follows is the consultations with relevant political factors in both countries,” Zaev added.

“From today, the friendship between the Republic of Macedonia and the Republic of Greece is even stronger. We are solving the dispute in order to strengthen the dignity and identity of the citizens in both countries,” Zaev concluded.