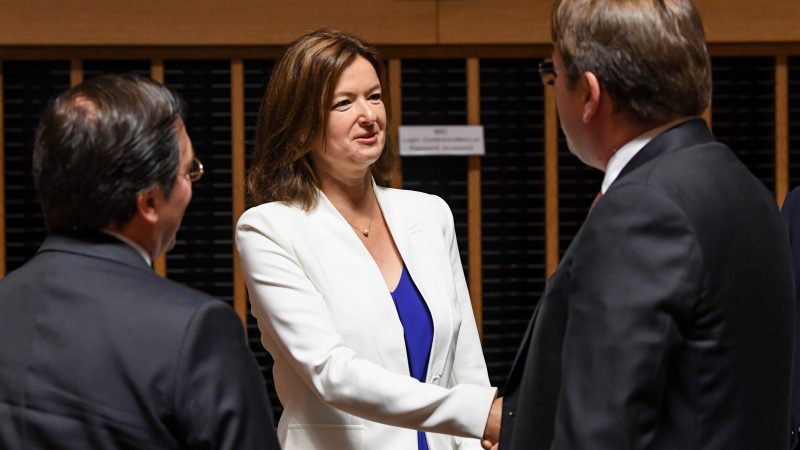 Out of the six hopefuls, only Montenegro and Serbia have formally opened accession negotiations while Albania and North Macedonia have been in the waiting room for several years. [European Council]

Slovenia has urged member states to send a strong political signal to the Western Balkans, while EU leaders are likely to fall short of firm commitments.

EU leaders are set to meet for a summit between 23 and 24 June where the topic of enlargement, particularly with Ukraine and the Western Balkans, is set to be high on the agenda.

“If you’re thinking a bit out of the box, the Western Balkans have also 20 tor 30 years of bloody wars behind it, and I would like we would send some strong political signal also to Bosnia and Herzegovina, being aware that they have to meet a lot of criteria,” she added.

Slovenia has been pushing hard to secure Bosnia’s EU candidacy status. It is set to present a document, seen by EURACTIV, demanding the urgent granting of candidate status to European affairs ministers in Luxembourg on Tuesday (21 June).

The aim of the proposal would be “to send an immediate positive signal to BiH and the entire Western Balkans region”, the document states.

“Such signal to BiH, opening accession negotiations with North Macedonia and Albania, as well as visa liberalisation for Kosovo would re-confirm the EU’s commitment to the Western Balkans,” it adds.

Bosnia and Herzegovina applied for EU membership in February 2016. The European Commission adopted its opinion (avis) on the EU membership application of the country in May 2019, identifying 14 key priorities for the country to fulfil before it can open EU accession negotiations.

Under the proposal, after getting the candidacy and before opening EU accession talks, BiH would need to adopt three laws, on the judicial council, on preventing the conflict of interest and on public procurement.

Asked by EURACTIV whether she believes the proposal will find support among EU member states, Fajon said she would know it would be “a very ambitious proposal”.

However, she added, some EU foreign ministers on Monday during an initial discussion “showed understanding that we have to have enlargement of the Western Balkan high on the priority list”.

“If we can at least keep up political pressure, talk about it and find maybe some out-of-the-box formula for the weeks and months to come with light at the end of the tunnel, then we will be happy,” Fajon said.

“If it is at this EU summit [in June], that we can have a paragraph or a sentence referring to this, we will be even happier,” she added.

According to the latest set of EU draft conclusions, seen by EURACTIV, EU leaders are set to stress their “full and unequivocal commitment to the EU membership perspective of the Western Balkans and call for the acceleration of the accession process”.

But while they are also set to stress the process itself would be a “reversible and merit-based manner”, they are likely to fall short of any further commitments to the region.

On Bosnia and Herzegovina (BiH), they are expected to welcome the recent political agreement from 12 June but stress its political leaders will have to implement its commitments first, “which will allow the country to advance decisively on its European path, in line with the priorities set out in the Commission opinion, to obtain EU candidate status”.

Out of the six hopefuls, only Montenegro and Serbia have formally opened accession negotiations, while Albania and North Macedonia have been in the waiting room for several years.

The current stalemate is due to a veto from Sofia over claims Skopje does not recognise and provide adequate rights for Bulgarians in the country and various other historical and cultural disputes.

“For the North Macedonia and Albania, it is crucial we find an agreement,” Fajon said.

Asked what that could entail, Fajon said she calls on the French EU presidency to make a last-ditch effort and “find a ‘magic formula’ with Bulgaria to drop the veto and move forward”.

In a letter to European Council President Charles Michel last week, Slovenian President Borut Pahor said that the Western Balkan countries appeared ever more distant despite past promises. At the same time, Ukraine and Moldova were being fast-tracked since Russia’s invasion of Ukraine began on 24 February.

Pahor called Bosnia a risk of nationalism and instability, citing Bosnian Serb separatism with strong Russian backing, and said it was “absolutely necessary to unconditionally grant Bosnia-Herzegovina the status of a candidate for EU membership.”

“The aim of the Slovenian proposal that suggests granting EU candidate status to [Bosnia] without delay is to send an immediate positive signal to [Bosnia] and the entire Western Balkans region,” Pahor’s letter said.

“Such a signal to [Bosnia], opening accession negotiations with North Macedonia and Albania, as well as visa liberalisation for Kosovo would re-confirm the EU’s commitment to the Western Balkans,” it added.