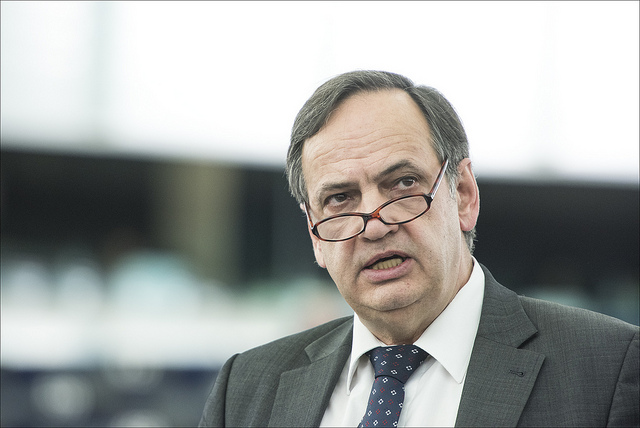 The results of the US election show the need for the EU to start focusing on its own interests, Knut Fleckenstein, vice-president of the Socialists and Democrats group (S&D), told euractiv.com.

He also stressed that following today’s presentation of the enlargement package by the European Commission, accession talks with Turkey should “freeze” as Ankara is no longer interested in joining Europe.

Not the same US

Referring to the US election, the SPD lawmaker expressed his concern about the results, saying that as a German, “I can say this is not the same US that after Nazi times taught us democracy and values”.

Fleckenstein added that the day after the American elections was also a challenge for the EU to change its focus.

“It may also be a challenge for us to find a new way to go and concentrate on our own interests,” he said.

“Trump is dangerous when it comes to the position of women, discrimination, rights, migration […] if he continues this rhetoric then, I am seriously concerned,” she told euractiv.com.

“We are gravely concerned about the degradation of the rule of law and democracy unfolding in the aftermath of the failed coup attempt. In its own interest, Turkey urgently needs to stop moving away from the EU,” he stated.

“They say unabashedly and shamelessly that the EU should review its negotiations with Turkey,” Erdoğan told a business group in Istanbul. “You are late, go and review them as soon as you can. But don’t just review them — go and make your final decision,” he added.

Referring to Turkey’s annual report, Fleckenstein stressed that in recent months, Ankara had moved further away from the common values “we thought we had”.

“The pressure on media, arresting of members of parliament […] it’s very obvious that Mr. Erdoğan is not interested in becoming member of the EU and we should accept that,” the German legislator noted, adding that the negotiations should not finish but “freeze it until the Turkish government shows practically it’s interested [in the EU]”.

He also said that the European People’s Party was split on the issue. “Half of them agree with our view and the other half would like to have no negotiations with Turkey at all, because they don’t like them as a member of the EU anyway.”

Tanja Fajon agreed that Turkey was “clearly closing the doors to the European values and standards” and that the situation is showing that the democracy and rule of law are in danger.

As far as the Western Balkans are concerned, Fleckenstein said that Albania got a clear recommendation and that the Commission acknowledged what was done in the last year

“They [Albanians] really need to start to implement that then we will have the negotiations started […] that’s the aim,” the German politician added.

About the Former Yugoslav Republic of Macedonia, the S&D vice-president emphasised three points.

“We have to see that the elections will go correctly, secondly the special prosecutor should be supported and is necessary for his mandate to be longer and thirdly, a government should be formed very soon and start the reform agenda.”

Fajon noted that both the Western Balkans and the EU have to do more.

“There is a lack of jobs, bad paid jobs, a brain drain of young people, and growing nationalism. That’s the picture of the region today,” she underlined.