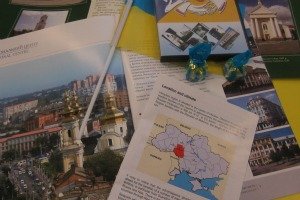 A delegation from the Vinnytsia region (see background) presented its potential for investment yesterday (15 September) at a public event hosted by the Committee of Regions, the Union’s assembly of local and regional representatives.

The region also took the opportunity to lobby for Ukraine to become a full-fledged member of the European Union.

This is the third time that a region in Ukraine, a country covered by the EU's Eastern Partnership initiative and which has not yet been formally granted the prospect of EU accession, has come to Brussels in a lobbying effort.

The regions of Crimea and Lviv recently presented to Brussels audiences their investment potential. However, Vinnitsiya is the first to have chosen the Committee of Regions for its presentation.

Silke Toenshoff, a top official at the Committee of Regions, said that Ukraine was expected to become the first country in the Eastern Partnership initiative to conclude a so-called 'Association Agreement' with the EU, the first step to strengthening bilateral relations that could open the door to future membership.

Launched in 2008, the Eastern Partnership covers the EU's relations with Armenia, Azerbaijan, Georgia, Moldova, Ukraine and Belarus. The political situation in the latter, however, makes its status "dependent on its own choices".

Toenshoff said EU programmes should be as open as possible to those countries ahead of an Eastern Partnership summit scheduled in Warsaw on 29-30 September.

Nadiya Tsok, deputy head of Ukraine's mission to the EU, said his country was indeed the leader in the Eastern Partnership, but was striving for full EU membership as a long-term objective.

"Please regard us as a candidate country," she pleaded, adding that sceptics in "some EU countries" would be "beaten by history".

Tsok also paid tribute to the East European countries which have already become EU members and were now helping Ukraine and "showing the way" for Kyiv on its path to EU integration.

Serhiy Tatusyak, head of the Vinnitsya regional state council, made an impressive presentation of the region's potential. A number of companies operating in the region, which sponsored the event, were highlighted as the successful proof of "investment already working".

Two Vinnytsia-based companies, Nemiroff (a vodka producer) and Roshen (a confectionery firm) provided hard drinks and candy at a reception following the event. Ukraine has a powerful confectionery industry, which posed a challenge during negotiations for a free-trade area with the EU. However, diplomats told EURACTIV that however difficult, a compromise had been found.

Tatusyak also extensively highlighted the many attractions and tourist destinations in the region, some of which could be seen on the website www.pearls.vn.ua. Unfortunately, the website is only available in Ukrainian.

Tatusyak also stressed that Vinnytsia had an airport capable of receiving even the biggest airplanes, such as the Boeing 747 or the Airbus 380. He said the region was looking for an investor to develop the airport into a modern and powerful hub.

He also highlighted the agricultural potential of the region, recalling that in the not-so-distant past, Vinnytsia was providing 10% of the sugar in the former Soviet Union. Today, he said, new technologies had enabled the production of what he claimed was the cheapest sugar in Europe.

Asked by EURACTIV if he feared the EU would sooner or later impose caps on this production, he said that he trusted the country's authorities as negotiators. Nadiya Tsok added that in EU circles, Ukrainians were regarded as "extremely tough negotiators".

The region is rich in agricultural land – more than two million hectares. It has the country's largest sugar beet complex. It also holds the leading position in grain crops, potato growing, gardening and livestock breeding.

There are three main pipelines crossing the region: Urengoy-Pomary-Uzhgorod, the Soyuz pipeline and Dashava-Kyiv pipeline.

The region is rich in mineral resources, in particular the Veliko-Hadomynetske kaolin deposit: the richest and biggest in Europe.