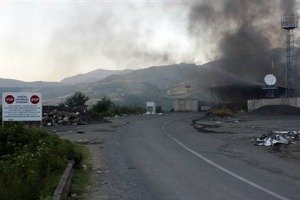 Masked Serbs attacked and burned down a border post at the Serbia-Kosovo border yesterday (27 July) and fired at members of NATO's KFOR peacekeeping force. Two days ago Kosovo forces had launched a similar attack. The EU strongly condemned both attacks.

"It was confirmed that an act of arson was committed against that position [Jarinje border crossing]… There have also been confirmed reports of shots fired at KFOR personnel in the vicinity," KFOR said in a statement quoted by Reuters.

It did not say whether anyone was injured in the attack or whether KFOR troops had returned fire, but said reinforcements had been sent to the border.

A similar attack by Kosovo special forces took place in the same area two days ago, in which one of their officers was killed. The EU deplored this “unilateral action”.

Kosovo's Prime Minister Hashim Thaçi accused Belgrade of masterminding the violence. "We will not withdraw, there will be no return under any circumstances and at any price," he said.

He said Serbia was trying to carve out a piece of northern Kosovo, but this "will never happen".

Serbia's pro-European President Boris Tadi? urged Kosovo Serbs to refrain from violence. "The hooligans who are sparking violence are not defending either the people or the Serb state," his office said in a statement.

A Serb eyewitness said on Wednesday that a group of masked men armed with wooden planks, axes and crowbars attacked and burned the Jarinje border post, which consisted of two-storey prefabricated buildings and a roofed passageway for cars.

"Later a bulldozer was brought to demolish the burned buildings," he said.

In a separate incident earlier on Wednesday, an unidentified gunman fired shots at a NATO helicopter, a NATO spokesman said, but there were no injuries.

The UN Security Council accepted a Serbian request for an urgent meeting on tensions in Kosovo after Serbia sent a letter to the 15-nation council requesting an open meeting.

The call was supported by Serbia's ally Russia, which like Belgrade has refused to recognize Kosovo's February 2008 declaration of independence from Serbia (see background).

The council opted for a compromise and scheduled closed-door consultations on Kosovo on Thursday, rather than a public meeting, the diplomats told Reuters on condition of anonymity.

“I have learnt with great regret that ghosts of the past are trying to disturb the peace in northern Kosovo. Recent violence is unacceptable and must stop. I call on the leaders in Belgrade and Pristina to help ease the tension.

"On behalf of the European Parliament I send our heartfelt thoughts to the people wounded in the recent clashes.

“Reconciliation is part of the European integration process. It is important that civilians of all ethnic groups and religions overcome divisions of the past to achieve a peaceful coexistence, stability and prosperity.”

Kosovo seceded from Serbia in 2008, nine years after the end of a 1998-1999 war between Belgrade's security forces and ethnic Albanian guerrillas. In the following years, Kosovo was an international protectorate patrolled by NATO peacekeepers.

After Kosovo declared independence on 17 February 2008, the two million-strong republic, 90% of whose population is ethnic Albanian, established many of the trappings of statehood, including a new constitution, army, national anthem, flag, passports, identity cards and an intelligence agency.

However, the Serbian-populated northern part of Kosovo (the area of Mitrovica) remains largely outside the control of Pristina.

In December 2008 the EU deployed a rule of law mission, dubbed 'EULEX Kosovo', with the intention of taking over post-crisis management in the territory, which lies on the European continent. The aim of the operation is to assist and support the Kosovo authorities with the rule of law, specifically regarding the police, the judiciary and customs.

The EULEX mission is the largest EU civilian mission ever launched. The 3,000-member operation has the power to take on cases that the local judiciary and police are unable to handle.