The Brief – An afternoon in Berlin 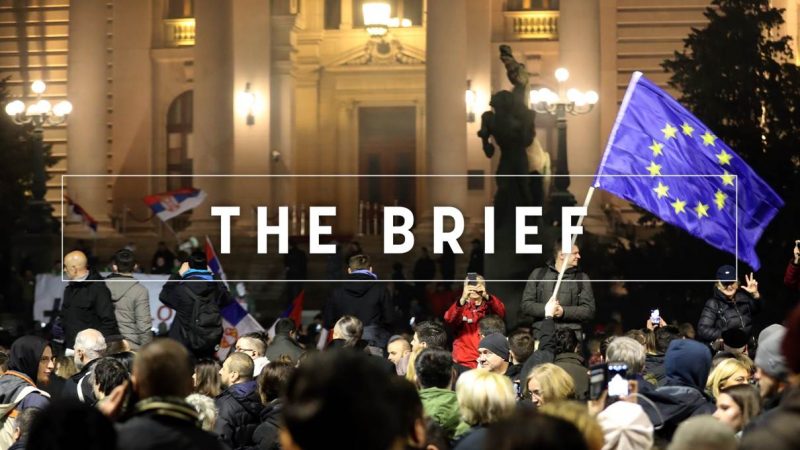 Today is one of those days when it’s nice to step outside the EU bubble, leave behind the whole election Spiel and walk into the cool shade of the Western Balkans, where things unfold at a more leisurely pace.

This evening, the Balkan statesmen will meet Angela Merkel and Emmanuel Macron in Berlin for what looks like another lame get-together meant to take the temperature of the region and its ambition to join the bloc. Tempting as it is to think that things will be different when the ‘real politicians’ take control, expectations are low.

The speculation that Washington and some EU countries want Serbia and Kosovo to reach a breakthrough agreement on normalising relations “before Christmas” seems increasingly less credible.

A recent report by the European Stability Initiative, an international think tank with an in-depth focus on the region, has identified several concrete steps the EU should take to revive and encourage the region’s reform efforts.

Needless to say, the countries themselves – Albania, Bosnia, Kosovo, North Macedonia, Montenegro and Serbia – have a lot of homework to do. But instead of parroting the ‘we’re ready when you are’ mantra, let’s look at what the EU should do, according to ESI.

The EU should immediately close the Pandora’s box of further talks on redrawing Balkan borders. Instead, it should reaffirm the need for gradual normalisation of Serbia-Kosovo relations. Germany, France and other EU members should make clear they are also prepared to take more responsibility for security in the Balkans, if at any moment the US president decides to withdraw all US troops.

At the same time, the EU should offer Serbia, Kosovo and all other Balkan countries the prospect of real, tangible progress. As full membership remains unlikely for any accession country before 2025, a concrete, ambitious and meaningful goal could be set for all Western Balkan countries: to meet the required standards to become full members of the EU’s common market by 2025.

In parallel, the countries should gradually be included in EU regional and cohesion policies. The EU should also support the region moving towards a Western Balkan Schengen area by 2030, with the concrete goal that all Balkan borders should become invisible by then.

To remain credible in Pristina, European countries should take two long overdue steps: Lift the visa requirement for Kosovo citizens, as the European Commission and Parliament have recommended; and support Kosovo in applying and joining the Council of Europe, with protection of minorities in Kosovo a key requirement of post-accession monitoring.

Finally, the EU also needs to send a strong signal to countries and leaders who reach out to their neighbours and minorities… The strongest signal would be to open accession talks with North Macedonia in summer 2019.

Most of this, however, probably won’t happen this year, as the current Commission is retiring and the new one will only be up and running in November, and enlargement will not be high on its agenda, barring a profound change in EU thinking after the elections.

The new Commission president can easily repeat Jean-Claude Juncker’s words that “there will be no new enlargement during this Commission’s term”.

But they would do well to temper it with promises of concrete progress. Something like: “The new Commission will make sure that several Balkan countries are fully prepared for membership by the end of its term, with all economic and political reforms this entails”.

Anything short of that will leave the region in limbo, directionless and vulnerable to ‘foreign influence’.

European leaders will try to bring bitter foes Serbia and Kosovo back to the negotiating table at a regional summit in Berlin.

I want to stop Brexit, fix Britain and reform the EU, says Gavin Esler who is next month likely to become one of the UK’s more unlikely elected politicians.

China sought to put a gentler face on its massive plan to recreate the old Silk Road, saying it must do more to explain the programme and boost sustainability even as state media hit back at critics.

Switzerland’s powerful labour union federation rejected a draft treaty with the European Union and called for restarting negotiations with the country’s most important trading partner.

As the London marathon aims to become a world leader in sustainable sport, this weekend’s edition introduced a new set of measures in a bid to go green.

85% of EU citizens believe vaccines are an effective way of preventing diseases, but almost half of them think vaccines “can often produce severe side-effects,” according to a new Eurobarometer survey.

Marking a departure from its existing policy, Europe’s biggest business lobby group said it was discussing backing a carbon tariff at the EU’s border.

The first on the three Spitzenkandidaten debates for the European elections next months.

Still confused by the Spitzenkandidaten process? Re-watch our explainer video ahead of the Maastricht Debate tonight and follow EURACTIV for updates.