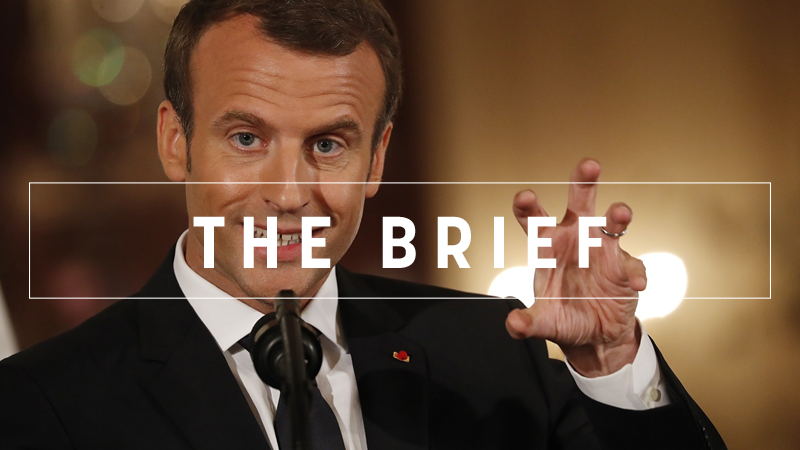 Just when it looked like the six Western Balkan countries were turning a corner (enlargement is back on the EU’s radar, accession perspectives are taking a more concrete shape and timeline), in walked Macron to shatter the illusion.

In comments to MEPs in Strasbourg, curiously under-reported by the media, Macron – the EU’s latest great white hope – said he was not in favour of more EU enlargement for the foreseeable future.

He said France would only support bloc expansion when there is first “a deepening and a reform of our Europe”, sounding the common refrain of his vision (which, by the way, never mentioned enlargement until last week).

“I don’t want a Balkans that turns toward Turkey or Russia, but I don’t want a Europe that, functioning with difficulty at 28 and tomorrow as 27, would decide that we can continue to gallop off, to be tomorrow 30 or 32, with the same rules,” the French president said.

The Commission’s new enlargement strategy has timidly proposed 2025 as the year when Balkan frontrunners Montenegro and Serbia might possibly join.

Connoisseurs of EU affairs know that every ambitious reform of the bloc takes more than a decade – such is the nature of the complex EU beast. So, if Macron’s words are to be taken seriously, enlargement could once again become an option after 2030.

To make the irony more poignant, Macron’s comments came on the same day that the Commission recommended opening accession talks with another two Balkan countries, Albania and Macedonia.

As every step of the accession process needs to be approved by all member states, one might rightly wonder if France will agree to open talks with two new candidates. Or perhaps, it might opt to stall them but keep encouraging Montenegro and Serbia, with which it has had traditionally friendly relations.

Whichever way the cookie crumbles, the precedent of publicly discouraging enlargement is already there. When Jean-Claude Juncker took the reins of the Commission in 2014 and said there would be no enlargement during his mandate, the entire region responded by slowing reforms and sinking back into political stalemates and ethnic tensions.

Juncker has learned his lesson since. In Strasbourg, where he shared the limelight with Macron, he said:

“If we remove from these countries, in this extremely complicated region, I should say tragically, a European perspective, we are going to live what we already went through in the 1990s. I don’t want a return to war in the Western Balkans.”

While a new war in the impoverished region may not be very likely, there are other dangers lurking with Russia, Turkey and China eager to get a foothold there.

The EU-Western Balkans summit in Sofia on 17 May may be the last chance to reassure the Balkans that Europe is serious about enlargement. And that it speaks with one voice.

Bulgaria’s media freedom is the worst in the EU and plenty of fake news has been thrown around since a controversial youth forum in Sofia drew the ire of many of the participants.

EU enlargement chief Johannes Hahn has been told to keep his nose out of the Macedonian name dispute. The Austrian Commissioner said a solution could be found within two weeks but was told by both Athens and Skopje to stop meddling in the UN-led talks.

MEPs also want the financial sector’s investments to be fully aligned with the Paris Agreement and BP admitted it got the growth of renewable energy wrong.

Nearly €300bn of investments has been mobilised by the Juncker Plan, meaning it is halfway towards its 2020 target of €500bn. Ireland finally struck a deal with US tech giant Apple on paying back €13bn, after the Commission ruled the iPhone maker had benefited from illegal tax breaks.

France’s cybersecurity agency chief warned that draft EU rules mean countries already advanced in the field could be forced to “step back into the past”.

Speaking of: Brexit continues to amaze. A new app for EU nationals to get UK residency won’t work on Apple phones, the UK might stump up €5bn for its own version of the Galileo satellite programme and Brexit negotiator David Davis proved his credentials at a committee meeting…

This Brusselaar wondered why the local authorities were cutting down trees at the wrong time of the year. The response he got is a bit of a shocker…

Oh and happy world penguin day! The flightless avians seem to have a big fan at Commission HQ.

A vote in the UK’s House of Commons on the Customs Union, although not binding, could be crucial to the rest of the Brexit negotiations. The European Commission will also come out with a legislative proposal regulating online platforms’ business contracts and a non-binding strategy on fake news.