The Brief, powered by BP – Macron’s crush on Serbia 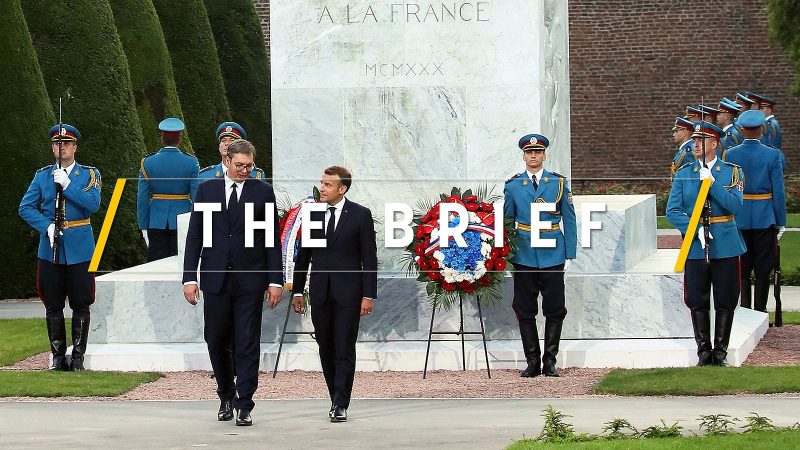 Last August French President Emmanuel Macron delivered a 5-minute speech in Serbian in Belgrade. The effect of this most extraordinary effort on the audience was huge. Just like for Kennedy in 1963, the magic worked.

The video doesn’t really show it, but the speech was delivered at a very special place.

Facing Belgrade’s iconic fortress of Kalemegdan, on the confluence of the Danube and Sava rivers, stands a bronze statue of a female figure with a sword atop, and beneath, the words “We love France as she loved us, 1914-1918”. Arguably, no other monument to another country exists anywhere in the world.

The outbreak of the Great War brought Serbia to the attention of the French public. France provided material support to its Serbian ally in early 1915, dispatching aviators, navy officials and medical staff to help Serbian forces. Later, Serb and French soldiers fought in the Salonika campaign, and on 1 November 1918, they marched in liberated Belgrade.

More than 100 years later Macron capitalised on the French-Serbian friendship: 22 bilateral agreements, as well as letters of intent, were signed during the visit.

It’s undoubtedly a big success, and it’s in striking contrast with the French president’s recalcitrant position on EU enlargement in general, and on blocking accession negotiations with North Macedonia and Albania.

It looks fishy, but actually it makes sense.  Let’s speculate…

Serbia is the only country in the Western Balkans without plans to join NATO. It is also the most pro-Russian country, certainly the only one where Putin is a rock star. Serbia’s President Aleksandar Vučić is a Putin fan.

If Macron wants to advance his agenda of improving relations with Moscow, as he clearly indicated in his interview with The Economist last Thursday, Serbia could certainly be a bridge in such relationship and a valuable ally.

Serb leaders, who always aim at “greatness”, would certainly be ready to punch above their weight, geopolitically speaking.

With the UK on its way to leave the EU, and NATO becoming ‘brain-dead’,  as Macron put it, he possibly feels at liberty to experiment with a new paradigm – keeping the Western Balkans pro-Atlantic countries in limbo, while banking on the Serbian card.

Is there a better way to engage with Russia?

We repeat, this is speculation, or rather an educated guess. But we already see several EU countries reacting to Macron’s interview with The Economist. And others have their doubts as well.

A message from BP: The world needs dramatically fewer emissions if we are to meet the Paris goals. Lowering carbon emissions from the transport sector is a crucial part of that. Read about the scale of the challenge and the multiple solutions needed.

French President Emmanuel Macron told the Paris Peace Forum Europe can be a “power broker” between the United States and China, as the two countries continue to quarrel over the details of a future deal aimed to end the current trade impasse.

But Macron has already met some opposition in Europe. The new European Commission has yet to be approved, but its president-elect, Ursula von der Leyen, has locked horns with Macron over the future of EU enlargement.

France, Germany, the UK and the EU urged Iran to stand by its 2015 nuclear deal commitments, after the UN’s nuclear watchdog said in a new report that it detected uranium particles at an undeclared site in Iran, revealing even more cracks in the accord.

Europe will implement “faithfully” new international standards that will force its banks to raise around €135 billion in additional capital to face future crises as they struggle to regain investors’ trust.

The jailed Catalan pro-independence leader Oriol Junqueras has the right to immunity as a result of being elected to the European Parliament in May, the EU Advocate General Maciej Szpunar said in his conclusions on Tuesday.

Hungarian Prime Minister Viktor Orbán has done nothing outrageous except to challenge the “EU orthodoxy” in some areas, and has been unfairly labelled as an extremist, the leader of the British conservatives in the European Parliament, told EURACTIV.

Thousands of Poles took part in a nationalist march through the capital Warsaw, chanting “God, Honour, Fatherland”, with the march leaders protesting against same-sex liberties, globalism and abortion.

Many viewers in Ukraine were taken in by what looked like an anti-terrorist forces swoop on a TV studio during a live show. It now appears that journalists had staged the fake attack to flag the authorities’ pressure on their work.

Last but not least, check out this week’s Transport Brief, in which Sam Morgan brings you “all the news moving the world and much more”.