The Brief, powered by BP – Time for New Democracy to apologise 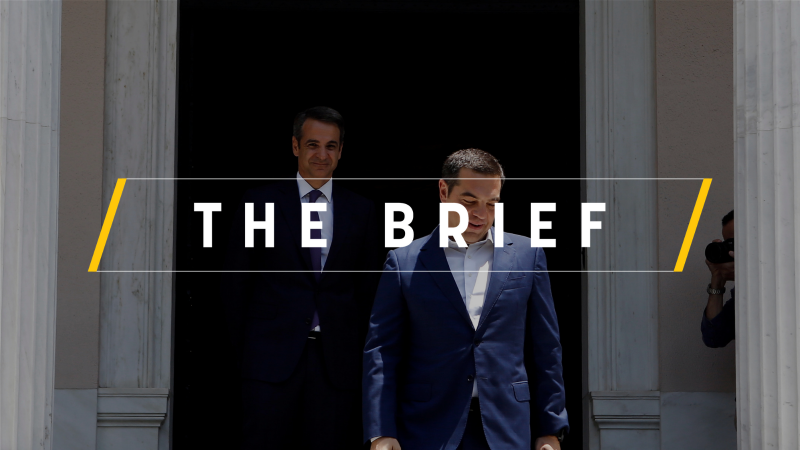 Realpolitik can be tricky. It often makes politicians go back on things they had promised before taking office. Greece’s newly-elected centre-right government is a case in point. It is high time they apologised for their stance on the North Macedonia name change deal.

When it was in opposition, New Democracy (ND), which belongs to the European People’s Party (EPP), fiercely opposed the North Macedonia name change deal, known as the “Prespa Agreement”.

It said the deal was against the Greek national interest and rode the “anti-deal” wave especially in the northern part of Greece.

But now that it’s in power, it appears to have quietly changed its mind.

Just yesterday, Deputy Foreign Minister Miltiadis Varvitsiotis said the deal “leaves space through the European integration process of our neighbour to find beneficial ways of cooperation on both sides.”

In the same vein, Defence Minister Nikos Panagiotopoulos said if the deal is properly implemented by both sides, “we can hope for a better future for our countries”.

This U-turn, which has taken New Democracy only a few days to make, leaves the party with some difficult explaining to do.

First of all, New Democracy has to apologise to the voters who lent their support because of the party’s opposition to the deal.

Secondly, it might consider offering a mea culpa to former Foreign Affairs Minister Nikos Kotzias, who had received death threats and was branded as a traitor.

Thirdly, New Democracy should apologise to EPP’s Manfred Weber for putting him in a difficult position. When Weber was officially the EPP’s Spitzenkandidat for the EU Commission presidency, he backed New Democracy by remaining silent on the issue for more than six months, despite being placed under extreme pressure.

When EURACTIV.com wrote that Weber was in favour of the deal, he was forced to say it was fake news. When we published the audio file to prove it, he did not react. Again, sorry should not be the hardest word.

Fourthly, New Democracy needs to apologise to all the Balkan people, who still remember the Greek promise made in Thessaloniki back in 2003, which offered the Western Balkans countries the hope of a European future.

Voters, and reporters, are used to politicians making and then breaking promises to get elected, but playing politics over an issue as sensitive and long-standing as North Macedonia was reckless and irresponsible.

That the Mitsotakis government has changed its mind is to be welcomed. But the prime minister, and his party, should apologise for the damage caused along the way.

A message from BP:
We’re partnering with Solidia Technologies to reduce the carbon footprint of concrete, responsible for up to 7% of global greenhouse gas emissions. At BP, we see possibilities everywhere… to help the world keep advancing.

France is eager to claim the position of the European Commission’s secretary-general that will be left vacant after the departure of Martin Selmayr at the end of July. But Emmanuel Macron’s quest for control in Brussels could be met with opposition.

Italy’s two ruling parties clashed over the election of German Ursula von der Leyen as the next president of the European Commission in a vote that could endanger Rome’s hopes of securing a top job in the new EU executive.

Tensions have worsened between Budapest and Kyiv over a Ukrainian language law, which Hungary considers hostile to its minority population in the Transcarpathia region.

The Ukrainian government has adopted new legislation to strengthen customs cooperation with the EU in order to better combat corruption and smuggling.

G7 ministers listed the requirements Facebook’s new ‘coin’ Libra should meet, as regulators are increasingly wary of the “serious risks” posed by the new digital currency.

A ‘No Deal’ Brexit would leave a £30 billion per year hole in UK spending plans and plunge the country’s economy into an immediate recession, the UK’s chief budget watchdog warned.

British diplomats tried to establish a “very private link” with former French president Jacques Chirac with the “unavowed aim” of exposing him to the risks of a European currency union, declassified documents revealed.

Although all EU ministers agree on higher climate objectives in the post-2020 Common Agricultural Policy, they still do not know how to put this environmental ambition into practice.

Air traffic management is the focus of some serious EU-funded research and development.

Last but not least, check out our latest Digital Brief.

Informal meeting of justice and home affairs ministers in Helsinki.