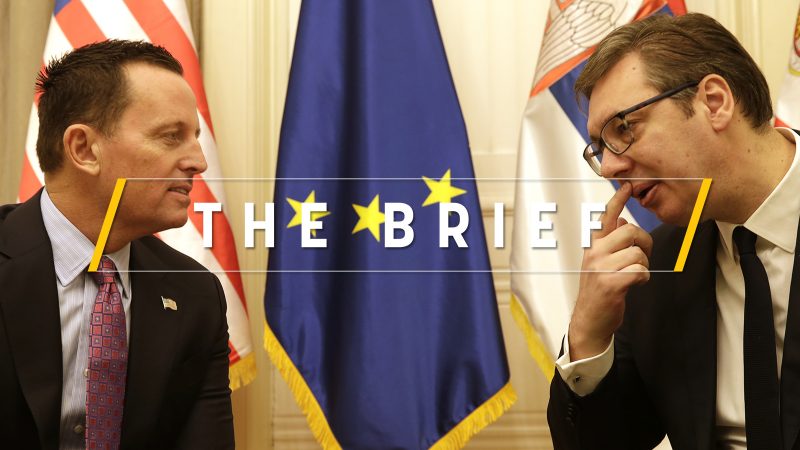 On 20 January, Belgrade and Pristina agreed to launch direct commercial flights after more than 20 years.

Direct flights were halted in 1998 when war broke out in Kosovo between ethnic Albanian insurgents and Serbian security forces. Serbia lost control of its former province after the NATO bombing in 1999 ended the ethnic conflict in which more than 13,000 people, mainly Kosovo Albanians, were killed.

Then, on 6 February the new Prime Minister of Kosovo, Albin Kurti, pledged to abolish the 100% tariffs on Serbian imports, an impediment to normalisation efforts between the two countries enforced by his hardline predecessor Ramush Haradinaj in 2018.

But there was more. On 15 February, the presidents of Serbia and Kosovo, Alexandar Vučić and Hashim Thaçi, announced during the Munich Security Conference deals to work on building rail and road links between their capitals.

Whereas getting them in the same room was already difficult enough until now, there are even rumours Washington wants the Serbia-Kosovo issue done and dusted this year.

There is one thing in common in all these three developments: the broker was the United States, represented by the country’s hyperactive ambassador to Berlin, Richard Grenell.

The EU had tried and failed to fix the tariffs crisis. In a typical American style, Grenell reportedly told Pristina that the US will annul its investment in Kosovo unless the tariffs are revoked. He may have said other things as well, for all we know.

The resumption of flights was hailed by NATO Secretary-General Jens Stoltenberg, but no similar congratulations came from the EU side. The same goes for the other breakthroughs. It really looks like the EU is jealous of America’s success in the Balkans.

On 14 February, journalists asked the Commission to comment the US successes, as there is a lot of EU money being spent in the region without any such visible results. In reply,  the EU executive was on the defensive during the next 18 minutes.

The questions remain: why is the US more successful than the EU in our immediate neighbourhood? Is it because Grenell is more talented as a diplomat than Borrell or his predecessor Mogherini? Or is it because the EU only relies on soft power, while the US also uses other, more effective methods, such as blackmail of corrupt politicians?

In any case, the US is much more active on the wider Balkans these days. US pressure can also be felt in North Macedonia and even in EU member Bulgaria. In the latter, State Secretary Mike Pompeo for the first time named a corrupt official, and it is expected that more such “public designations” will follow.

One of the obvious reasons for the sudden US activism in the Balkans is Russia, which has always had appetites for the region. The other, less visible one, is Turkey, which is no longer the reliable ally the US needs in the region. Washington needs reliable allies in the corrupt Balkans – and it seems to be getting them rather easily.

Poland would see its €2 billion share of the EU’s Just Transition Fund cut in half under a new EU budget proposal published on Friday, which penalises countries that have not signed up to the bloc’s 2050 ‘climate-neutrality’ goal.

European honey producers are calling for an emergency action plan to be put in place to keep the sector, pointing to a drop in production across the EU and a rise in cheap imports.

The EU aims to create common data spaces to increase the quality of services when it comes to agriculture and healthcare, according to a European Commission data strategy draft seen by EURACTIV.com.

In Case you missed our Munich Security Conference coverage, here are the roundups of Day 1, Day 2 and Day 3.

3 responses to “The Brief – Why is America eclipsing the EU in the Balkans?”