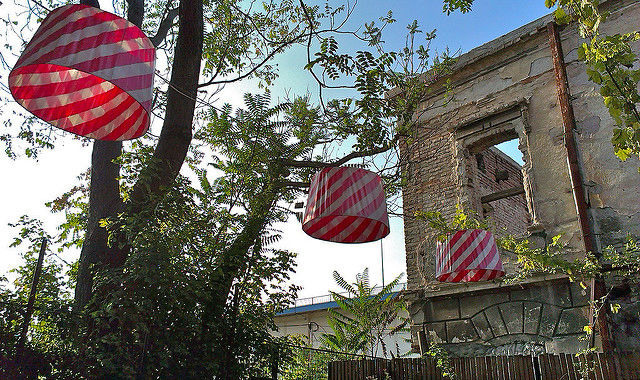 The failure of the Serbian judiciary to make tangible progress in resolving the bulldozing of buildings in Belgrade’s Savamala district brought angry citizens out on the street again on 25 April, a year after the event occurred. EURACTIV.rs reports.

The incident took place during the night of 24 April 2016, following snap elections in Serbia, when a whole street was demolished without prior notice by masked men using heavy machinery, opening the way for the UAE-financed, Belgrade Waterfront luxury real estate project.

The Savamala case subsequently became politically sensitive for the government, because citizens continue to demand answers and periodically gather at rallies organised by the civic initiative Let’s Not Drown Belgrade.

This time thousands of demonstrators gathered at the rally.

Ljuba Slavković, of Let’s Not Drown Belgrade, said that the Savamala case and the Belgrade Waterfront Project are an “(example) of what the citizens are exposed to”.

She called the Belgrade Waterfront Project a “robbery” and a “usurpation of the public interest and resources of Serbia”.

Protestors brought banners related to the case, but also about the government and the political system, such as “While citizens are hungry the elite rejoices” and “Against dictatorship.”

The daily protest against the results of the elections held on April 2 were not held separately but merged with this event.

A number of demonstrators, largely young people, are unhappy with the election results and have been gathering at the so-called Protest Against Dictatorship since 3 April. Protest rallies continue to be held in several Serbian cities and towns.

The rally, called “On the trail of the phantom” named after the masks used by those who demolished the buildings in Savamala, got the support of several labour organisations such as the military and police trade unions, as well as education workers in Vojvodina.

The problem with the judiciary is well known in Serbia. Even Prime Minister Aleksandar Vučić recently admitted that more efforts should be invested in dealing with the issue.

According to the President of the board of the Prosecutors’ association of Serbia, Radovan Lazić, the Savamala case reveals systemic flaws, but there is also the possibility that some sort of political influence was involved.

As he told Danas, the prosecution is dependent on the police to collect evidence in this case, and if it fails to do so, there are no efficient mechanisms of constraint.

A request could be filed to hold establish the police agent responsible for failing to act upon the request from the Prosecutors Office. However, as he put it, the complaints are filed with the police and Interior Ministry, who are, as Lazić said, the entities that instructed the agent not to deliver.

The acting Ombudsman, Miloš Janković, said that the only positive development should be if the institutions decided to advance on this issue “by themselves”, out of “respect of their own dignity”.

If the case is resolved as the result of “external” influence, the problems being faced in Serbia won’t change substantially.