The rally, the second weekend protest in a row, was the first significant opposition demonstration since spring 2017 when thousands of young Belgraders protested for weeks against Vučić’s presidential victory.

Thousands of people have headed out in the snow and freezing temperatures for tonight’s opposition-led protest in Serbia’s capital, Belgrade.

It comes a week after the first protest that saw some 15,000 people head out onto the streets. pic.twitter.com/b1kuctQJVy

It was called by opposition parties after one of their leaders was beaten ahead of a political gathering in central Serbia last month.

Thousands marched in snowy Belgrade in their second anti-govt protest this month against attacks on opposition voices and media #Serbia pic.twitter.com/12kiBv3Ndb

The opposition Alliance for Serbia (SZS), an umbrella of parties from the entire political spectrum, accused the attackers of being supporters of Vučić’s ruling Serbian Progressive Party (SNS), a claim the authorities denied.

Many protesters were blowing whistles and horns, the main symbol of 1990s mass opposition protests against late strongman Slobodan Milošević, whose autocratic rule ended in popular uprising in October 2000.

Vučić, a hardline nationalist-turned-European, is accused by the opposition and civic society of having established autocratic rule and full control over media, using them to campaign against opponents. 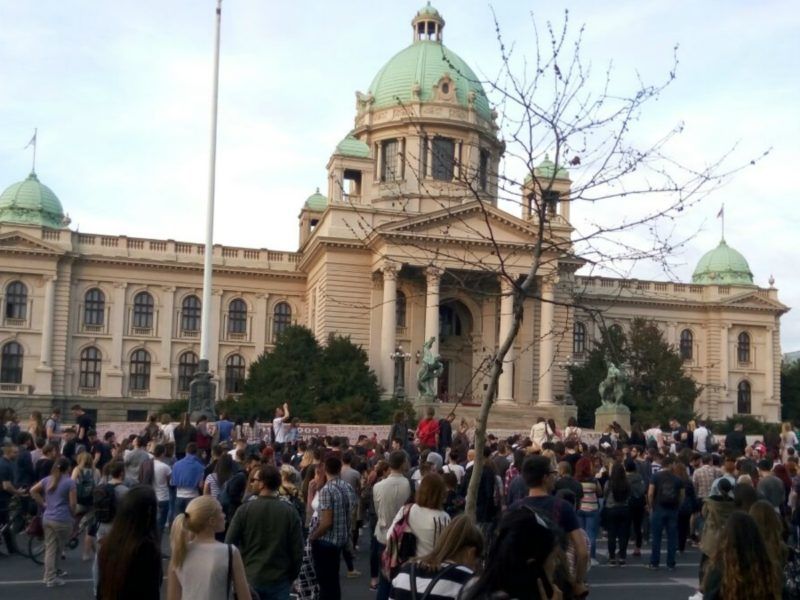 One of the protesters, 51-year old Zvonko Radosević, said he joined the protest because “we don’t want to live in Vučić’s autocratic country.”

“I don’t want Vučić to represent me.”

He said he was “glad” to see a large crowd.

“I thought that the people were losing the will, but this shows there is something burning still.”

But he added that he didn’t expect much change.

“I think it will be hard to bring him down… nothing will change, we will just make him worry a little.”

Following last weekend’s protest Vučić said he would not meet opposition demands for free media and fair elections “even if there were five million people in the street”, prompting opponents to wear badges “1 in 5 million”.

Thousands of demonstrators defied heavy snow in Belgrade to protest what they say is a crackdown by the government of President Aleksandar Vucic on opposition parties and the media https://t.co/3O1jfVidCE

In its latest report on Serbia, the European Parliament “strongly” encouraged Serbian authorities” to “improve the situation regarding freedom of expression and freedom of the media”.