Protest in Belgrade on 11 May following the destruction of buildings at Hercegovacka Street. [BETA]

The incident took place during the night, following snap elections on 24 April that were won by the incumbent Prime Minister, Aleksandar Vučić, by a landslide.

Serbia’s pro-European Prime Minister Aleksandar Vučić claimed victory in yesterday’s (24 April) general election after projections showed him winning by a landslide. But the hardline Radicals are set to return to Parliament after a 4-year absence.

A whole street was demolished without prior notice by masked men using heavy machinery. By destroying the buildings, they opened the way for a contested, UAE-financed “Belgrade Waterfront” luxury real estate project. 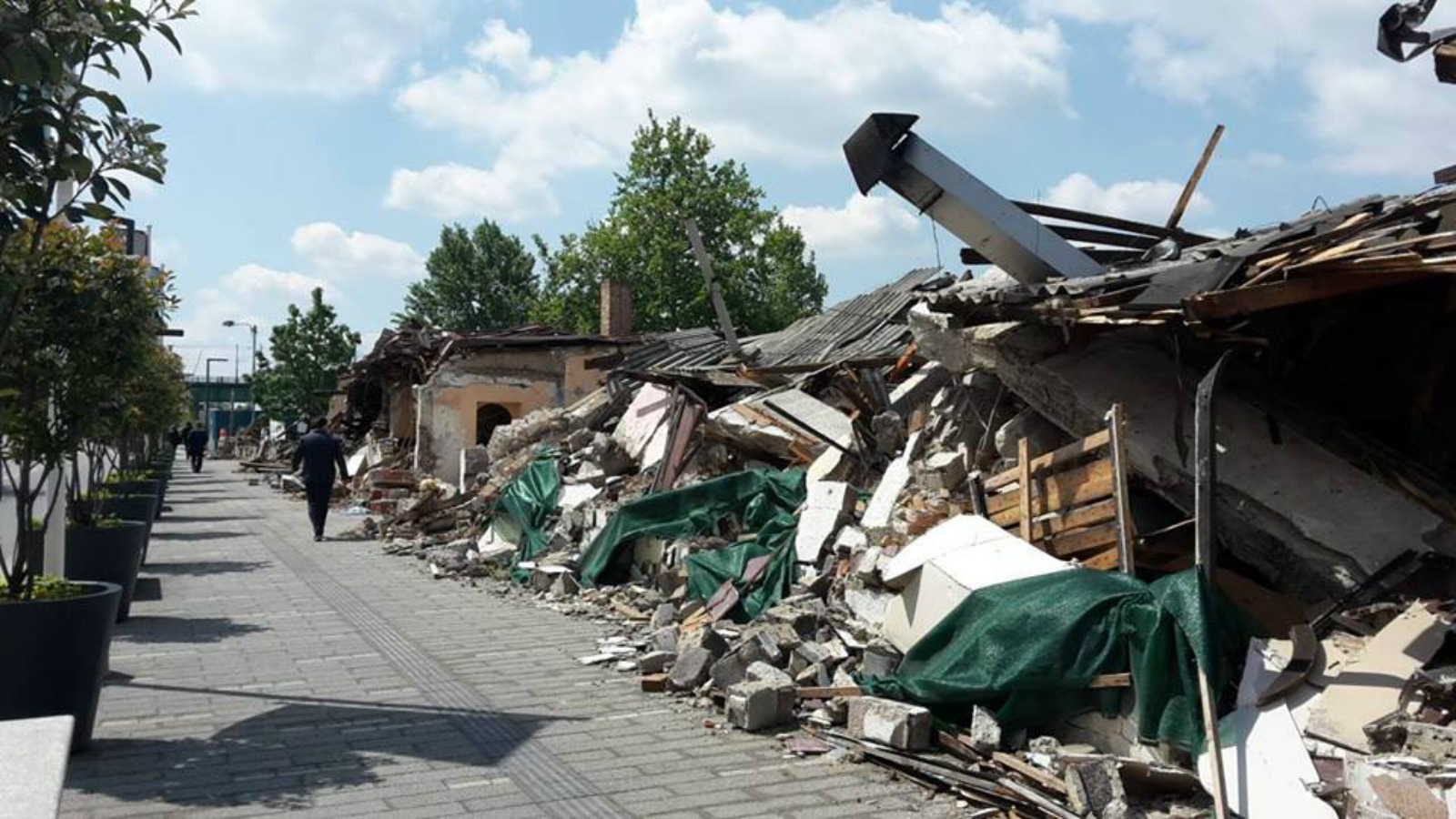 Belgrade Waterfront is an ambitious state-backed project that envisages two million square meters of residential and commercial space, including two residential towers, on the bank of Sava river. The project caused much discontent, and as a result citizens rallied around the civic initiative “Ne davimo Beograd” (Don’t Drown Belgrade). They warned that “the plundering project” directly harmed Belgraders’ public interests, and that the city center had been given away to private investors.

The images of the destroyed buildings in the Hercegovacka Street, facing the Sava, where a series of local businesses, and a much praised NGO-run refugee centre used to be, provoked an outcry in Serbian social media.

When the protestors gathered in downtown Belgrade on Wednesday, Vučić denied any wrongdoing, and said the affair was the result of political games.

As the story unfolded, it emerged that the people witnessing the event called the police, but police failed to react. Moreover, the rights of the witnesses were brutally violated: according to what they say, they were handcuffed, their phones and SIM cards were taken away, and they were prevented from trying to identify the vehicles that were used in the illegal operation.

Evidence gathered by Serbian Ombudsman Saša Janković confirmed these facts. His report, published on 9 May, based partly on the communication records of the Belgrade police during the night of 24 April, points to “an organized violation of the citizens’ rights”. Janković points out that such wrongdoing was “coordinated on several levels and between several state and non-state entities”.

The report presents evidence that citizens called the police, or even went to the police station in person to report what was going on, and that the police failed to react even when it was clear they were victims of criminal offenses.

According to the communications transcript, the police operator called the head of the shift to seek advice on the repeated calls from Hercegovacka Street, and got an answer which clearly indicates he knew what was going on, but had no intention of taking action.

Despite the Ombudsman’s findings, Vučić first denied any violation of the law. During a visit to Vranje in southern Serbia on 10 May he said that the demolished buildings were illegal anyway, that there was no need to demolish them by night, and that someone clearly wanted to create a scandal.

It took him one more day to come up with a slightly modified narrative and explain that the buildings were planned for demolition by 30 June, that court proceedings were in progress to stop the demolition, and that, apparently, someone decided to shorten the procedure.

The prime minister added that he hoped that the perpetrator was not someone from the state, and said that the person to make such a decision had to be “an idiot”.

While admitting there were irregularities, Vučić reacted in a way common to Serbian politics: he diverted the attention to another topic, questioning the legal standing of other interested parties in the affair. According to the premier, what was more important was how the owners of the destroyed properties had acquired them and the profit they generated from them.

Illegal buildings are not uncommon in Serbia, due to the very complex procedure of obtaining construction permits in the past, but also due to the shortcomings in the application of laws. It is estimated that there are 1.5 million illegal buildings in the country.  Currently, a program for their legalization is ongoing, based on a law adopted in 2015.

Vučić failed to respond clearly to the main issue addressed in the Ombudsman’s report, which is the attitude of the police – their deliberate decision to ignore the calls of citizens and a possible conspiracy of the police with “non-state entities”.