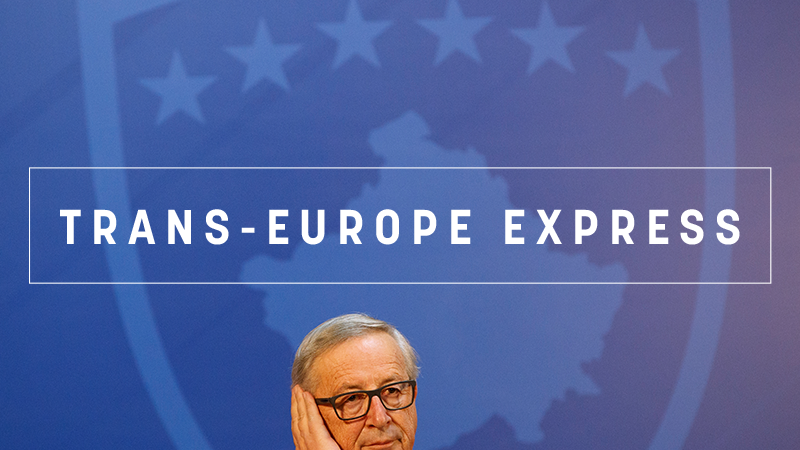 Sent out every Friday at noon, Trans-Europe Express gives you an insider's view of the most important coverage from across the EURACTIV media network, its media partners and much more. [EPA-EFE/VALDRIN XHEMAJ]

Jean-Claude Juncker completed his shuttle diplomacy tour of the Western Balkans this week in the manner of an ageing soccer captain playing the last games of his career.

He may no longer be able to run fast or score goals but he can distribute balls and set the pace. Particularly in away games against minnows, where critics are less sharp and defenders refrain from fierce tackles.

Of course, critics in the EU will be quick to point out that it might well have been Juncker who had messed up in the first place, by stating loud and clear that there would be no enlargement during his term in office, effectively killing what little reform appetite the six Balkan countries had.

But it was also Juncker – rather than Johannes Hahn or Federica Mogherini – who brought enlargement back on the table in his state of the union speech last September. Never mind that it probably came out of fear of the growing Russian/Turkish/Chinese influence rather than the wish “to complete the European project”.

It was Juncker, again, who personally supported the initiative of Bulgaria’s Boyko Borrisov to encourage the Balkans at an EU-Balkan summit, due in May.

And it was Juncker, yet again, who decided to tour the region – a feat neither Prodi nor Barroso undertook, despite overseeing the bloc’s unprecedented expansion in the previous decade.

Alexandra Stiglmayer, a senior analyst with Europan Stability Initative think tank, welcomed the Commission’s new resolve about enlargement, “which is manifest in the strategy and in Juncker’s tour.”

“Whether it will create a new momentum in the Balkans too, and whether member states will go along is another question. But it is definitely positive”.

Flanked by Mogherini and Hahn, Juncker hopped across seven countries in five days and, despite saying he was “not there to lecture”, did just that. [But he made sure to throw in a candy as well every time.]

Starting on a sweet note in Albania, he surprised everyone by saying “the 2025 date is open to all candidate countries,” not just Serbia and Montenegro – a comment Stiglmayer was quick to challenge.

“I don’t believe there will be any other country joining in 2025, and even for Serbia and Montenegro, it will be difficult. They need to significantly step up efforts to finish negotiations in 2023,” she said.

To Macedonia, Juncker said “do your job with Greece”, resolve the name dispute and accession talks will be launched “within months”.

In Serbia, he said priority was to work on full normalisation with Kosovo, a bitter pill Serbia will have to swallow after vowing never to recognise its former province’s independence. But he was also quick to praise “impressive steps” and progress Belgrade has made so far.

Ditto in Kosovo, where he also threw in a plea for Pristina to ratify a border demarcation deal with Montenegro, needed to earn a visa liberalisation. But he was careful not to offer any firm promises.

During a short stay in Bosnia, a highly disunited and barely functional state built from the ashes of the devastating 1992-95 war, his message was: “Unite if you want to join the EU”. Hardly a coincidence, coming at a time of growing ethnic divisions among the country’s Muslim Bosniaks, Croats and Serbs.

At the final stop, in Sofia, Juncker reiterated the message for all six leaders: “No country in the region fully meets the conditions right now but the door is open. You’ve got to fight organised crime, corruption, resolve territorial disputes”.

But by that time, his visit had already lost momentum and the final press conference in Sofia on Thursday was barely registered in the local media, which are dealing obsessively with a scandal surrounding the sale of CEZ Bulgaria power company to a small local firm.

No ‘fait accompli’? Former UK Prime Minister Tony Blair warned that Britain’s departure from the EU could weaken both parties and called on European leaders to reform the EU in a bid to persuade British people to change their mind on Brexit.

Post-Brexit borders. An EU proposal to avoid a hard border on the island of Ireland post-Brexit has prompted a war of words between London and Brussels, with UK Prime Minister May saying it would threaten Britain’s “constitutional integrity”.

Loyal lieutenant. Former Italian PM Berlusconi, who is barred from holding public office until 2019 because of tax fraud conviction, indicated Parliament President Antonio Tajani as his favourite pick for the 4 March vote.

‘Painful decisions’. German Chancellor Angela Merkel has unveiled her picks for ministerial posts for a new, younger cabinet. Meanwhile, the Social Democrat’s party base vote on whether to enter the grand coalition is just around the corner.

Successive approximation? While the EU expects effective dialogue with Poland over its rule of law, Warsaw is preparing a White Paper to defend its position ahead of the March deadline for implementing the Commissions recommendations.

Extradition case. The release prominent Syrian Kurdish leader Saleh Muslim, who is wanted by Turkey on terror charges, caused a diplomatic stir between The Czech Republic and Turkey, with Ankara labelling the move as “support for terrorism”.

Long, winding road. Western Balkans countries need to tackle low productivity and speed up reforms, the EBRD warned this week. Otherwise, it could take them up to 200 years to catch up with the living standards of the EU.

Accession hurdles. Rule of law, judiciary and a legally binding agreement on normalising relations with Kosovo are the main challenges on Serbia’s road to EU membership.

Between two chairs. While being on track to EU membership, Moldova wants to have normal economic relations with Russia, says Moldova’s foreign minister Tudor Ulianovschi, speaking also about prospects to resolve the frozen conflict in Transnistria.

Beast from the East. Amid brutal cold spell hitting Europe, new tensions between Moscow and Kyiv flared after Russia’s Gazprom said it will not restart gas supplies to Ukraine, with Naftogaz accusing its counterpart of violating contractual agreements.

Bridging continents. With China’s ambitions to extend the Silk Road into Central Europe, the dream of taking the Trans-Siberian railway from Beijing via Moscow all the way up to the gates of Vienna could become reality in 15 years.

Although the EU is racing to make the superfast 5G mobile technology available to consumers by 2025, it still is lagging behind faster competitors in Asia and the US. Read here our Special Report from this week’s Mobile World Congress in Barcelona.