Can Dündar, editor-in-chief of Cumhuriyet, and Erdem Gül, 49, the newspaper’s Ankara bureau chief, stand accused of trying to topple the government with the publication last May of video purporting to show Turkey’s state intelligence agency helping to truck weapons to Syria in 2014.

Erdoğan, who has cast the newspaper’s coverage as part of an attempt to undermine Turkey’s global standing, has vowed Dündar will “pay a heavy price”. The two journalists could face life in prison if convicted.

Anti-government chants rang out as the decision to take their trial behind closed doors was announced in the Istanbul courtroom, packed with journalists, opposition politicians, rights groups, relatives and a handful of European diplomats.

“We will try you in stadiums” shouted some of the protesters. “You will get lost in the depths of that palace” said others, in reference to Erdoğan’s vast new palace complex in Ankara, as security guards ushered them out.

The prosecutor argued for a confidential trial because some evidence involved state secrets. Lawyers for the journalists argued that evidence could be read in closed session while the rest of the trial should remain open.

Erdoğan has acknowledged that the trucks, which were stopped by gendarmerie and police officers en route to the Syrian border, belonged to the MIT intelligence agency and said they were carrying aid to Turkmens in Syria. Turkmen fighters are battling both President Bashar al-Assad and Islamic State.

But he has said that prosecutors had no authority to order the trucks be searched and that they were part of what he calls a “parallel state” run by his ally-turned-foe Fethullah Gülen, a United States-based Islamic cleric who Erdoğan says is bent on discrediting him and the Turkish government.

A 473-page indictment says the editors aided a “terrorist” network led by Gülen.

Ahead of the trial, Dündar said he would use the hearings to refocus attention on the story that landed him in the dock.

“We are not defendants, we are witnesses,” he told Reuters in an interview at his office, promising to show the footage in court despite a ban.

“We will lay out all of the illegalities and make this a political prosecution … The state was caught in a criminal act and it is doing all that it can to cover it up.”

The trial comes as Turkey deflects criticism from the European Union and rights groups that say it is bridling a once-vibrant press. EU enlargement chief Johannes Hahn described the trial on his Twitter account as a “test case for press freedom and rule of law in Turkey”.

Dündar and Gül spent 92 days in jail, almost half of it in solitary confinement, before the  constitutional court ruled last month that pre-trial detention was unfounded because the charges stemmed from their journalism.

Both were subsequently released pending trial, though Erdoğan said he did not respect the ruling.

“Elsewhere in the world (Dündar and Gül) would be lauded for their efforts to dig into this issue,” said Nina Ognianova of the Committee to Protect Journalists (CPJ).

CPJ condemns the closing of @candundaradasi and @erdemmgul trial. The trial, if remains sealed, cannot be fair. It must be reopened.

“They have done their jobs as investigative journalists, serving the public interest in pursuing a story that is significant not just for the country, but the region,” she said, describing the trial as part of a “massive crackdown on press freedom”.

Authorities this month seized control of Zaman, Turkey’s top-selling newspaper, on charges it funded Gülen’s network. A few weeks earlier the pro-Kurdish IMC channel was pulled off the air over allegations of “spreading terrorist propaganda”. 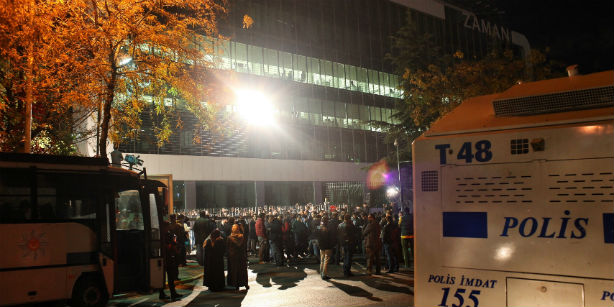 Turkish police have stormed the offices of a leading opposition paper linked to President Recep Tayyip Erdo?an’s arch foe, in the latest crackdown on government rivals.

Dündar took the helm at Cumhuriyet, which has a circulation of 52,000, last year and worked to overhaul the staunchly secular 92-year-old daily into a left-leaning outlet with more readers.

A new investigative reporting unit he set up unearthed the footage of the purported arms shipment.

Now he faces death threats, an armed guard prowls Cumhuriyet’s perimeter and a bomb-suppression blanket sits at the entrance. Photos of potential attackers hang on the wall.

“We were arrested for two reasons: to punish us and to frighten others,” Dündar said in the interview. “And we see the intimidation has been effective. Fear dominates. But we actually think we have frightened (the state). Their threats stem from that fear.”