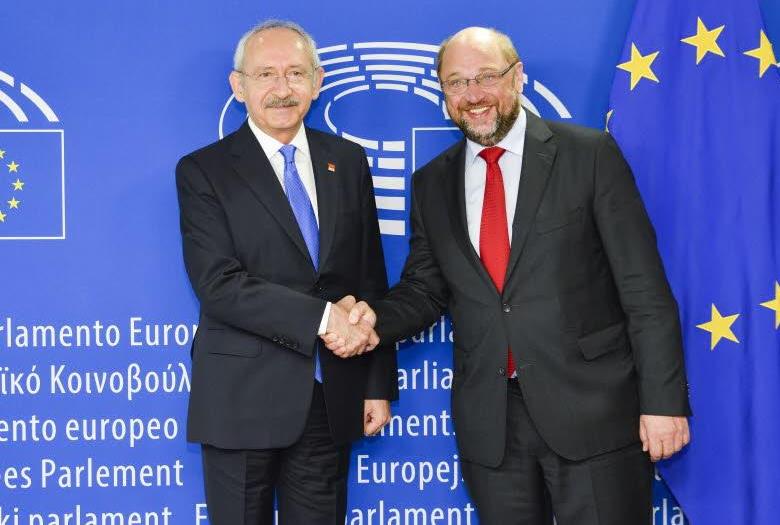 Kemal K?l?çdaro?lu, leader of Turkey’s Republican People’s Party [CHP], believes that the EU candidate needs a coalition government to tackle the fragile situation in the country.

In a conference organised last week by the Foundation of European Progressive Studies, Kemal K?l?çdaro?lu spoke about the current challenges facing Turkish politics, as well as the EU response to the refugee crisis.

The snap election will take place on 1 November amid escalating tensions between the government and Kurdish PKK guerrillas, prompting fears of a civil war.

Since 1984, the Kurdistan Workers Party (PKK) has waged an armed struggle against Turkey, aimed at establishing a Kurdish state.

Ankara is in an uncomfortable position, as Washington, while considering the PKK a terrorist group, sees the affiliated YPG Kurdish militia in Syria as its chief ally in the fight against ISIS.

‘We need a coalition government’

Referring to the snap election due to take place next month, K?l?çdaro?lu expressed doubts over the motives of the Turkish president, Recep Tayyip Erdo?an.

The general election in June saw no party securing the necessary majority to form a coalition government.

The ruling (Justice and Development Party) AKP fell 18 seats short of a majority, while the pro-Kurdish Peoples’ Democratic Party (HDP) party captured 13% of the vote and became the first pro-Kurdish political faction to gain representation in parliament for Turkey’s 14 million Kurds.

Coalition negotiations between the AKP and the opposition parties reached a deadlock, and as a result, Erdo?an called a snap election (24 August).

“What’s the reason behind these elections? Does the Justice and Development Party (AKP) want to be a single party in the government? Is this a democratic approach? That’s the question,” he said

K?l?çdaro?lu also noted that Turkey, despite not having a compromise culture [in domestic politics], needed to have a coalition government, as such governments “brought the biggest changes in Turkey”.

As far as democracy standards in Turkey are concerned, K?l?çdaro?lu emphasied that his country faced serious violations of human rights and freedom, as well as huge pressure on news media.

“This is a situation we cannot accept. We need a first class democracy and journalists should be able to write freely,” he said.

K?l?çdaro?lu continued, saying that if the EU wanted to have a say in the region, it should encompass Turkey, and make it a full member.

“Now the perception in Turkey is that they [EU] wants us to be part of the Middle East. The EU is losing”, he stressed.

“We had hopes to become a full member of the EU. Today, the picture is different and the process is not rosy.”

K?l?çdaro?lu also met the European Parliament’s President, Martin Schulz, and other EU top officials, who reportedly expressed concerns over the escalated pressure on the Turkish media, and the refugee crisis.

“We were informed that meetings on these issues were being held, and the Turkish government has been warned on them,” K?l?çdaro?lu said.

The West turned a blind eye

Referring to the unfolding refugee crisis, the Turkish official blamed the EU for ignoring the problem in Turkey.

“The West turned a blind eye […] when 2.5 million refugees were in Turkey the EU didn’t say anything. When these refugees crossed the borders, our EU friends asked what’s happening in Turkey,” he noted.

“Everyone applauded Turkey, but when these refugees reached the EU, then the West wondered why they were fleeing their countries,” he added.

The CHP head said Ankara had done everything it could do by embracing two million Syrian refugees, but stressed that “now it’s a problem for Europe”.

He also emphasised the fact that all the parties in the country were trying not to pit Turkish society against Syrian refugees.

“The EU needs to make quick decisions and it should be more active, end the conflict in Syria and in Iraq,” he said, adding that the borders with Syria are not controllable, and Turkey could not turn the refugees back.

Regarding the 1 billion euros provided by the EU to Turkey to tackle the refugee crisis, K?l?çdaro?lu said that this money should have been given before reaching that situation.

Asked what the root of the current refugee crisis was, he said that the problem began after the American intervention in Iraq in 2003.

PKK is a ‘terrorist organisation’

Concerning the PKK and his party’s position on the Kurdish issue, K?l?çdaro?lu made it clear that the PKK was a terrorist organisation that should lay down arms, without any preconditions.

The PKK is listed as a terrorist group internationally by several states and organisations, including NATO and the EU.

K?l?çdaro?lu referred to meetings he held with Martin Schulz, European Parliament rapporteur for Turkey Kati Piri, and Rebecca Harms, the co-chair of the Greens-European Free Alliance. He said they were all concerned about the escalating violence in the country.

“They expressed that they are concerned that terrorism has gradually increased, especially since the June 7 election, causing loss of life and property and affecting poll security,” K?l?çdaro?lu said.

Continuing on the Kurdish problem, K?l?çdaro?lu said it could jeopardise social peace, and underlined that only a democratic solution could stabilise the situation.

He noted that no government could solve the problem alone, and that everyone should participate.

“We drafted a roadma,p but Erdogan said no. Now we have a new phase of a conflict that disturbs,” he stressed, adding that Ankara needed a “social compromise with our legitimate partners HDP”.

Asked by EURACTIV if his party was satisfied with Erdogan’s fight against the Islamic State, K?l?çdaro?lu said: “Turkey really needs the struggle against ISIS, we supported from the very beginning the military mandate.”

“Russia is sending weapons to Syria and this is alarming. Russia, US, Iran and Turkey are the main actors, and they need to get together,” he added.

Erdogan’s government joined the anti-ISIS alliance in June, but part of the opposition and critics accuse him of using the campaign against the Islamic State as a political pretext to suppress the Kurds.

The Kurds, a mainly Sunni Muslim people with its own language and culture, live mostly in the mountainous region where the borders of Turkey, Iran, Iraq and Syria converge. Despite their long history, the Kurds have never achieved a permanent nation state.

In Turkey, Kurds form about 20% of the population. Turkey has threatened military intervention in Syria if Kurdistan Workers Party (PKK) militants set up camps there. The PKK has fought an armed struggle in southeast Turkey for the past 28 years. An estimated 40,000 people have been killed, most of them Kurds. Prime Minister Tayyip Erdo?an is the first Turkish leader to acknowledge the state's "mistakes" in its handling of the Kurds and his party has held secret talks with jailed PKK leader Abdullah Ocalan, but the conflict sputters on. Turkey often strikes PKK bases in Iraq's autonomous Kurdish region and Erdo?an has made any PKK bases in Syria could also be hit.

In Syria, Kurds make up about 8% of the population. Damascus has deprived thousands of Kurds of citizenship, banned the teaching of their language and clamped down on Kurdish political activities. However in April 2011, President Bashar al-Assad vowed to grant citizenship to Kurds in an attempt to cool resentment. In June 2012, Abdulbaset Sieda, a Kurd, was chosen to head the opposition Syrian National Council, but Kurds have taken little part in the anti-Assad uprising. More than 12,000 Syrian Kurds have fled to Iraqi Kurdistan.

In Iraq, Kurds constitute 15-20% of the population. Iraqi Kurdistan, autonomous since 1991, has its own government and armed forces, but still relies on the Baghdad central government for its budget. Since U.S. troops left in 2011, friction has grown between Kurdistan President Masoud Barzani and Iraqi Prime Minister Nuri al-Maliki over territory, oil deals and now Syria. Barzani has helped Syrian Kurdish groups. Maliki, along with his Shi'ite Muslim allies in Iran, is more sympathetic to Assad. Kurds, a majority in the three provinces that make up Iraqi Kurdistan, lay claim to the oil-rich Kirkuk region.

In Iran, Kurds form about 7% of the population. In 2011 Iran pledged to step up military action against PJAK (Party of Free Life of Kurdistan), a PKK offshoot which has sought greater autonomy for Kurdish areas of Iran. Kurds, along with other religious and ethnic minorities, have faced increasing discrimination since President Mahmoud Ahmadinejad came to power in 2005. Iran executed several Kurdish activists in 2009-2010.