Ukraine: ‘We have already paid for our EU membership with blood’ 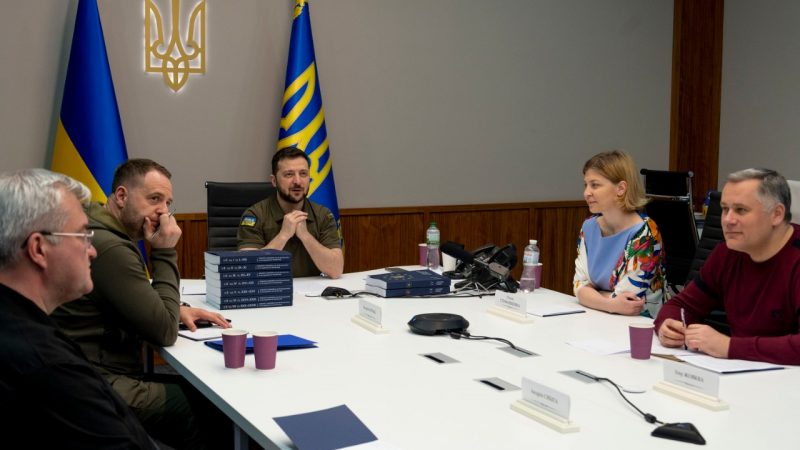 As Russia’s war rages on in the country’s east, Ukrainian officials are lobbying hard for EU leaders to grant the country candidate status as soon as possible, also as insurance to seal Kyiv’s strategic orientation.

On Monday (9 May), Ukraine finalised the second part of the questionnaire to acquire the status of a candidate country for EU accession, with the country’s President Volodymyr Zelenskyy presenting the completed 9-volume thick document to European Commission President Ursula von der Leyen during a video call.

Kyiv had completed the first part of the EU’s questionnaire on membership on 18 April at a record speed of only 10 days, a speed that in Brussels has upped the pressure not to dash the hopes of the country.

According to EU officials, the expectation is that the European Commission’s recommendation on whether the bloc’s leaders should discuss the next steps in the membership process could be drafted by late May and be ready by the end of June.

Formally adopting the country as a candidate would be a decision for the EU27 acting on expert advice from the European Commission, which would oversee the complex and potentially lengthy accession process.

Kyiv will notably have to meet rigorous standards in governance, fight corruption and apply the rule of law before it could be admitted as a member.

EU accession is a complex process, that both sides acknowledge, can take years.

Receiving the candidate status however is an important milestone, given that for many years Brussels looked the other way when Ukraine, Moldova and Georgia asked to be treated as future EU members, not just associated countries.

Ukrainian government officials realise they will have to win over a significant number of their counterparts in some European capitals.

Ukraine’s deputy prime minister for European and Euro-Atlantic Integration, Olha Stefanishyna says that European governments who are sceptical about Ukraine’s EU membership aspirations so far have presented rather ‘weak’ arguments.

The vast majority of EU member states support Ukraine’s aspirations, Stefanishyna told reporters in Kyiv, but added there are around six to seven countries that are sceptical about allowing Ukraine to proceed quickly.

The deputy prime minister named Germany, Portugal, Spain, Austria and Sweden as countries were among those where there would be a need for “discussion.”

Although Hungary supported calls by Eastern European countries earlier this year for Ukraine to become an EU member, in the long run, Budapest’s recent stance on blocking EU sanctions on Russia has raised eyebrows in Kyiv.

Asked whether she expects Budapest to be among those sceptical by now, Stefanishyna said Hungary has not been ‘negatively vocal’ towards Ukrainian membership aspirations so far.

But Stefanishyna left no doubt that Kyiv is determined to go the diplomatic extra mile to ensure a positive answer by EU member states in June.

“We have the understanding that it will be a long way to build the unanimity among all member states, our commitment is to leave no things undone,” she said.

“Whatever is needed on our site, to build this consensus, to mobilise this unity, will be done,” the deputy prime minister said, adding: “We have already paid for our membership with blood”.

EU diplomats noted in conversations with EURACTIV that Ukraine has been “lobbying EU member states as if it would already sit at the European Council table”.

“Realistically, we should not be talking about whether this country, that goes the extra mile of bureaucratic paperwork while fighting a full-scale war, should be part or a candidate member of the EU – we should make sure it is as soon as possible,” one EU diplomat noted.

But primarily, EU leaders, officials and diplomats stress that it is about the political message the granting of a candidate status would send, not only to Russia but also to 44 million Ukrainian citizens.

Ihor Zhovkva, an adviser to President Volodymyr Zelenskyy, told a visiting delegation of European parliamentarians that while Kyiv understands accession negotiations would be difficult, it “will not understand it if in June Ukraine will not be granted the candidate status on just mere bureaucratic reasons.”

One Ukrainian official, who spoke on the condition of anonymity, said it could mean to “kill the last bit of hope” of the young generations of Ukrainians that are fighting against the Russian invasion.

“What will happen if we take that from them? They will continue to fight because this is about survival, but they will remember that Europe let them down,” the official added.

Moreover, European Commission President Ursula von der Leyen suggested Ukraine’s path to future membership will also tightly be linked to post-war recovery provided by the West and part of a broader ambition to enfold Ukraine into the bloc.

“It could set a system of milestones and targets to make sure that the European money truly delivers for the people of Ukraine and is spent in accordance with EU rules,” von der Leyen said, referring to the proposed post-war recovery package.

“It could help fight corruption. We have to do that. It could align the legal environment with European standards and radically upgrade Ukraine’s productive capacity,” she added.

“Eventually, it will pave the way for Ukraine’s future inside the EU,” von der Leyen told the European Parliament last week.

European cities and towns are moving to support Ukrainian local and regional authorities through peer to peer schemes as sub-national leaders look to rebuild the war-torn country.

“We’ve done so much in terms of European integration standards, especially on a local level,” Maria Mezentseva, deputy chairwoman of the Verkhovna Rada’s committee on Integration of Ukraine with the EU, told EURACTIV.

Standing among the rubble in Kyiv’s liberated suburbs, Mezentseva stressed that especially the local and regional levels have been developing their infrastructure and communities according to European standards.