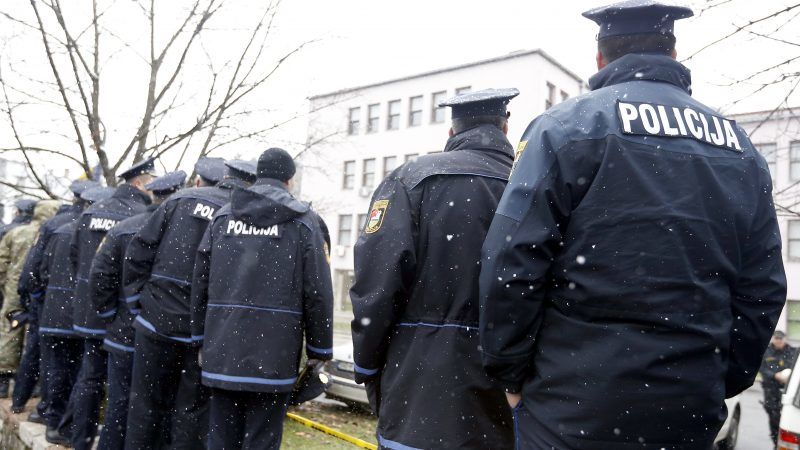 Bosnian police officers gather to protest in front of the building of the Bosnian - Croat Federation government in Sarajevo, Bosnia and Herzegovina, 18 December 2017. [Fehim Demir/EPA/EFE]

The United States and the European Union yesterday (21 February) warned Bosnia it needed to better protect the judiciary in corruption cases from political pressure, which had resulted in few high-level graft cases being processed in the Balkan country.

A report by the Organisation for Security and Cooperation in Europe (OSCE), funded by the US government, found that most high-level cases of corruption in Bosnia failed because they were poorly processed by prosecutors and judges.

In a country where corruption is widespread, no top official charged with graft has ever been convicted.

The OSCE report, which was based on monitoring 67 trials for corruption completed in Bosnia  and Herzegovina between 2010 and 2017, said that a lack of harmonisation of laws and criminal procedure codes involving graft in Bosnia’s multi-layer judicial system was among the main problems.

“Too many prosecutors aren’t drafting quality indictments, … too many judges aren’t scrutinizing indictments and they aren’t applying or interpreting the law in a reasoned, consistent way,” US Ambassador in Bosnia, Maureen Cormack, said during the presentation of the report. Lars-Gunnar Wigemark, the head of the EU mission in Bosnia and Herzegovina, said the basic problem was that penalties for engaging in corrupt behaviour were not harsh enough.

MEC: The OSCE report shows – clearly, precisely, and undeniably – that the legal system in BiH is not effectively dealing with corruption.

“There needs to be sufficient deterrent,” Wigemark warned. “You cannot become a member of the EU with such levels of corruption.”

MEC: I urge all judicial institutions in BiH, and especially the HJPC, to use this report and its recommendations to strengthen the rule of law and justice in BiH, and start now.  There is no time to waste. pic.twitter.com/jAi8gfPF8z

Bosnia aspires to join the wealthy 28-member bloc but EU officials have repeatedly said it needs to improve the rule of law and combat graft.

The report stressed the need for protection of judges and prosecutors from political pressure, and said responsibility for this falls on the High Judicial and Prosecutorial Council (HJPC), the top judicial coordination body.

“The key is for institutions like the (HJPC) to vigorously and impartially ensure that corruption does not go unchallenged,” Cormack said.

MEC: no one should be above the law.  BiH must achieve a government ruled by law, not men.  Unfortunately, in BiH, men — not institutions and transparent procedures — decide what “justice” means in BiH.  Justice cannot be reserved only for those without political connections.

She said the body has often allowed politicians in Bosnia to interfere in selecting, disciplining and dismissing judges and prosecutors, which was “unacceptable”.

“The HJPC must be independent, but it must also be accountable. Not to the politicians with a stranglehold on power in Bosnia, but to the people whom the judiciary represents and serves,” Cormack said.

HJPC President Milan Tegeltija said the body was already working on improving of its capabilities and training prosecutors and judges to deal with graft cases.