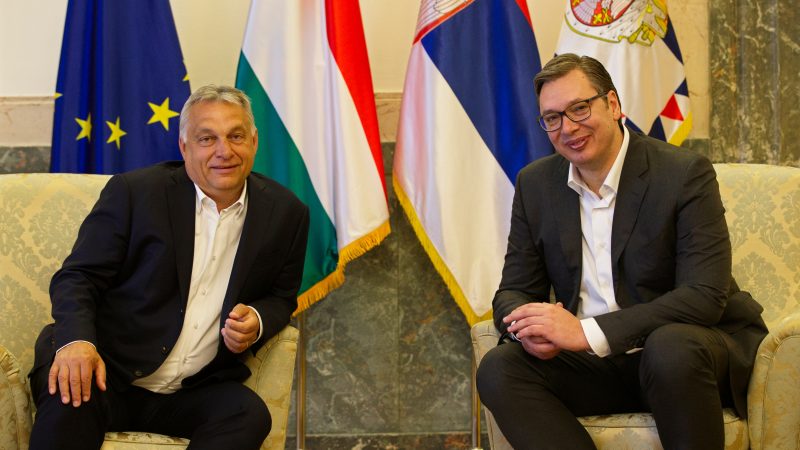 Hungary, whose government has been at odds with Brussels for a long time, has emerged as a major pro-Serbian lobbyist within the EU and this special “illiberal” relationship was formalised on Wednesday (8 September), Serbian journalist Darko Čačić reports for EURACTIV Bulgaria.

The prime ministers of Serbia and Hungary, Ana Brnabić and Viktor Orbán, signed an Agreement on Cordial Relations and Strategic Partnership in Budapest on Wednesday (8 September). Relevant ministers also signed seven documents on cooperation in commerce, agriculture, and diplomatic relations.

After the joint session of the two governments, Orbán said their relations had reached an “unprecedented level” and reiterated full commitment to Serbia’s European integration.

Brnabić stated that Hungary is “absolutely and undoubtedly the most reliable partner of Serbia” on its European path. These statements echoed previous remarks by Orbán and Serbian President Aleksandar Vučić, who have developed a close relationship in recent years.

Orbán has been pushing hard for Serbia’s membership of the European Union although Belgrade’s accession talks are currently deadlocked due to the lack of reforms, especially regarding ​​the rule of law.

At the Bled Strategic Forum in Slovenia last week, Orbán stressed once again his unequivocal support for Serbia’s EU membership, calling it “the key” to the Western Balkan region’s integration.

Orbán, who has engaged in a series of clashes with the EU on issues ranging from his treatment of refugees to pressure on academics, judges and media, visited Belgrade on 8 July.

Just a few days earlier, he promoted his vision for the future of the EU in seven points, one of which calls for Serbia’s immediate EU membership. Orbán’s proposal was criticised by numerous leaders of EU member states and German Chancellor Angela Merkel said the Hungarian vision of the EU’s future differs significantly from that of other countries.

“I thank the Hungarian PM and the government itself because they were willing to be attacked and criticised for supporting Serbia’s EU membership. There are not many friends like that. We will know how to value that and to return the favour,” Vučić said during Orbán’s visit in July.

By advocating Serbia’s membership in the EU, Orbán is strengthening Hungary’s influence in Serbia and the region, but he is also improving his country’s position in Brussels, Vladimir Međak, vice-president of the European Movement in Serbia, an independent civil society organisation, said.

“This is a win-win situation for Orbán. The strengthening of relations between Orbán’s Fidesz and Vučić’s Serbian Progressive Party has contributed to significant progress in economic cooperation between the two countries,” Međak told EURACTIV Bulgaria.

“On the other hand, enlargement is one of the important policies within the EU, and [enlargement] Commissioner Várhelyi comes from Hungary. By representing itself as an important player in the Western Balkans, Hungary is strengthening its position in various negotiations within the EU,” Međak said.

While the relationship may be profitable for Hungary, there is little Serbia stands to gain, he said, recalling a scathing comment from a member of the German Bundestag, Josip Juratović, who recently asked if Serbia wanted to join the illiberal EU of the Visegrad Group, to which Hungary belongs, or the EU of the Western European type.

“These two visions are real and Serbia will not be allowed to enter the EU as an illiberal state. It does not help Serbia at all if it is presented in Brussels as a state of that type. For the European integration process, that cannot help Serbia, it can be even harmful in certain circles,” Međak said.

One of Budapest’s motives for advocating Serbia’s membership in the EU is certainly the fact that Hungary would no longer have the EU external border in its south, said Međak, and assessed that policy as “practical, highly rational and logical”.

If Serbia were to join the EU, Hungary would be surrounded by EU countries except for a small stretch of border with Ukraine. “It is good for the country to be tucked between EU member states, because it increases the level of its security. It is much better not to have the EU external border for it is demanding and expensive”, Međak said.

Orbán and Vučić, both of whom are often criticised for taking authoritarian stances and consolidating their positions by limiting media freedom, have met with surprising regularity, especially in the past two and a half years. Economic ties between the two states have also intensified in recent years.

Behind the politics, business deals have been thriving, too. An investigation by the Balkan Investigative Reporting Network (BIRN) has revealed that a group of connected companies involving Orbán’s associates and associates of Serbia’s ruling Progressive Party have come to dominate the business of Serbian street lighting.