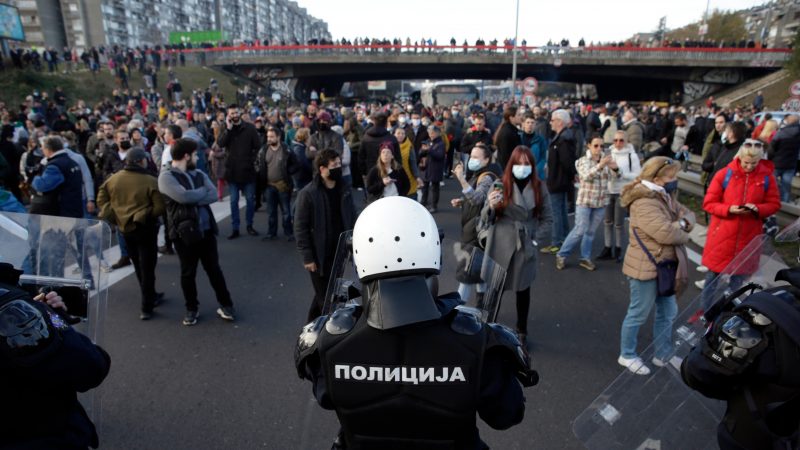 Serbian President Aleksandar Vučić has halted a controversial lithium mining project with British-Australian company Rio Tinto, following national protests throughout the country during November and December. But protesters vowed on Saturday (18 December) to continue the fight.

In recent weeks, Serbia has been rocked by mass protests organised by the ‘Environmental Uprising’ and the ‘Get Going for Change’ initiative, in what appears to be the most widespread protest since Vučić came to power.

Demonstrators blocked roads, major highways, and bridges in some 50 locations in Serbia, voicing two demands. The first was to amend the Referendum Act recently passed by parliament. The second was to repeal the Expropriation Act, designed to pave the way for the extraction of lithium by Rio Tinto in the west of the country.

The protests began on 28 November, and the largest took place on 4 December, when protestors stopped traffic on several major highways in Belgrade, blocked the Freedom Bridge in Novi Sad, and highways in Niš, Užice, Subotica and other cities.

Environmental movements have criticised Vučić’s government for failing to address the painful issues of air pollution and environmental preservation.

The Independent Association of Journalists in Serbia (NUNS) said ahead of the 4 December protest that Interior Ministry officials had intimidated and pressured journalists. In the early morning hours, officials reportedly visited the homes of journalists and newsrooms and insisted that the protests should not be covered.

But the intimidation attempt failed: Tens of thousands of Serbs took to the streets, and the media covered the events.

To divert attention, Vučić visited the small village of Gornje Nedelice, whose residents are directly affected by Rio Tinto’s plans to open a lithium mine. The pro-government media focused on Vučić’s visit to the village, only briefly mentioning the protests.

But despite initially saying the protests were illegal and funded by the West, Vučić eventually did a U-turn and suspended the controversial legislation.

On 8 December, the Serbian government decided to withdraw the law on expropriation from parliament. The government said that if the law were to be introduced again, that would be done through a broad public debate involving experts and civil society.

At the same meeting, the government proposed to parliament amendments to the Referendum and People’s Initiative Act, which was also a source of public discontent.

Vučić also said he had signed the law on the referendum and the people’s initiative but suggested that the government adopt amendments to the law that would take on board the Council of Europe’s Venice Commission’s remarks. This basically fulfilled the main demands of the protesters.

‘Environmental Uprising’, along with more than 40 initiatives and movements, issued a statement saying the withdrawal of “predatory laws” was a good sign but not a victory. They demanded that all lithium mine agreements and memoranda with Rio Tinto, signed by the former or current government, be made public and annulled immediately.

“I think this is a great victory for the citizens, and we congratulate everyone who was on the street these days. As far as we are concerned, this means that the main demands of the protest have been met,” said Dobrica Veselinovic, a member of the ‘We Do Not Give Up Belgrade’ movement.

The mass protests in Serbia were mentioned in a European Parliament resolution on Serbia on 16 December, which was not well received by Serbian authorities.

Serbian Prime Minister Ana Brnabić dismissed it as “politicising” and “spitting on Serbia”. She hinted that the resolution was written in Belgrade and that Croatian MEPs stood behind it. Serbia and Croatia, an EU member since 2013, have cold-shouldered each other ever since the break-up of Yugoslavia and Croatia’s 1991-95 war of independence.

On 16 December, the European Parliament adopted a resolution on human rights, democracy and the rule of law in Serbia.

MEPs expressed deep concern about the growing violence of extremist and hooligan groups against peaceful environmental demonstrations. They deplored the use of force by police against protesters and strongly condemned any violation of the right to peaceful assembly.

Brnabić told pro-government Pink TV that the resolution was initiated by Croatian MEPs and by Viola von Cramon (Greens, Germany), who, in Brnabić’s words, were furious that the EU had opened four new negotiating chapters with Serbia as part of Belgrade’s EU accession talks.

The prime minister also said MEPs had condemned the excessive use of force by police, although, in her words, there was no police when environmentalists blocked international highways. She insisted that police in some EU countries reacted much more sharply to similar demonstrations.

The ‘Environmental Uprising initiative’, which has organised roadblocks and protests across Serbia over the past four weekends, said it would take to the streets again after Christmas.

At their latest manifestation in front of the government building on Saturday, they said the protests would not stop until the primary demand is met: that the Rio Tinto company be expelled from Serbia.

Although Vučić has made a rare concession and bowed to the pressure of the protests, this does not mean his seven-year grip on power will be challenged at the 3 April presidential and parliamentary elections.

Vučić’s Serbian Progressive Party is not in serious danger of losing its majority in parliament, nor is there any risk of Vučić being defeated in the presidential election. Still, the protests could help the opposition join forces and consolidate, analysts say.

Novi Sad law professor and former Democratic Party chairman Bojan Pajtić commented that Vučić would have a real problem in the April elections if he did not abandon the Rio Tinto project, which has galvanised the civil society.