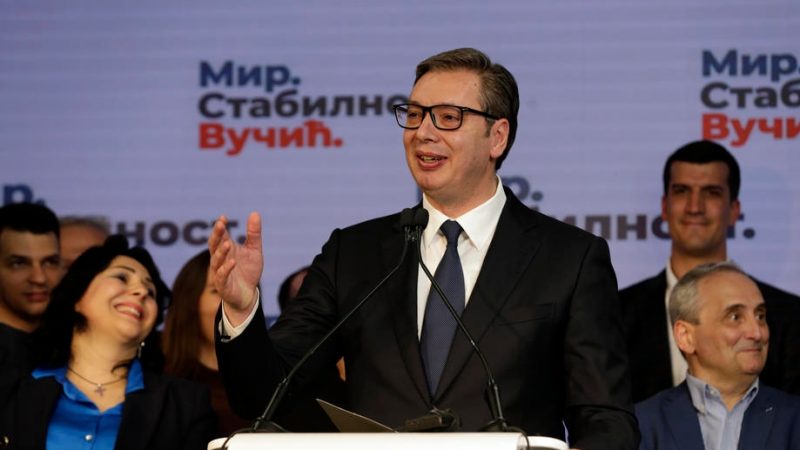 Serbia’s strongman Aleksandar Vučić claimed a landslide victory in general elections Sunday (3 April) paving the way for another term as president and extending his decade-long rule in the Balkan nation.

Official results were set to be announced late Monday but Vučić appeared confident in his commanding performance just hours after the polls closed, saying a run-off would not be needed.

“I am pleased that a huge number of people voted and showed the democratic nature of Serbian society,” Vučić stated during a televised victory speech.

“There was no suspense at any time,” he added.

The country of around seven million took to the polls to elect the president and members of the 250-seat parliament and cast votes in several municipal contests.

According to a projection by pollsters Ipsos and CeSID, Vučić is set to win the presidential vote with 59.8% of the votes.

Zdravko Ponos, a retired army general representing the pro-European and centrist Alliance for Victory coalition, is set to come second with 17.1% of the votes.

In the parliamentary vote Vučić’s Serbian Progressive Party (SNS) is set to come first with 43.6% of votes, Ipsos and CeSID projections showed.

The United for Victory opposition alliance trailed behind with 12.9% of the votes.

The Socialist Party of Serbia, a long-time ally of the SNS, is seen third with 11.6% of the votes. The Nada (Hope) rightist coalition and Moramo (We Must), an alliance of green movements and parties, garnered around 5.4% and 4.3% of votes respectively.

As the SNS would likely fail to secure enough of the 250-seat parliament to rule alone, it will have to seek coalition partners.

According to the State Election Commission preliminary data, turnout stood at 58.54%.

Vučić ran for a second five-year term on a promise of peace and stability just as Russia invaded Ukraine on 24 February, which has put Serbia under pressure from the West to choose between its traditional ties with Moscow and aspirations to join the European Union (EU).

Vučić acknowledged conflict in Ukraine impacted the campaign and said Serbia has no plans to deviate from its balancing game between the EU membership bid and close ties with Russia and China, a major investor.

In his typical style described by commentators as “Dr Jekyll and Mr Hyde”, Vučić delivered the messages his interlocutors wanted to hear. 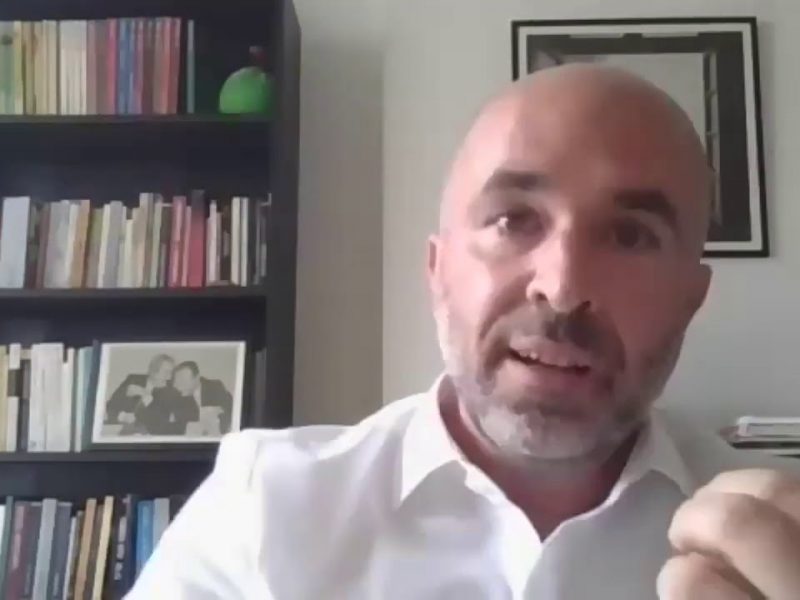 Analyst: Aleksandar Vucic is a Jekyll and Hyde character

Serbian leader Aleksandar Vucic has two personas. The pro-Western, Dr Jekyll side remains reserved for Brussels, EU capitals, and Washington, while citizens in the country get Mr Hyde, who is slowly transforming Serbia into a postmodern Weimar Republic, Srdjan Cvijić told EURACTIV in an interview.

Addressing the English-language media, Vučić said Serbia would continue on the European path, on the way to peace, stability and economic prosperity.

Asked by the Russian media whether Serbia would join the sanctions imposed by the European Union on Russia due to the aggression against Ukraine, he said that Serbia had taken a position on the issue, referred to the conclusions of the country’s National Security Council and added it would comply with them in the future.

“Serbia will try to preserve friendly and partnership relations in many areas with the Russian Federation,” Vučić said.

Serbia is almost entirely dependent on Russian gas, while its army maintains ties with Russia’s military.

“We will maintain policy that is important for the Europeans, Russians and Americans, and that is … military neutrality.”

The Kremlin also supports Belgrade’s opposition to the independence of Kosovo by blocking its membership to the United Nations.

According to numerous Vučić has secured an almost total domination of the country’s media and has ‘bribed’ voters with promises of various social payments if he is reelected. 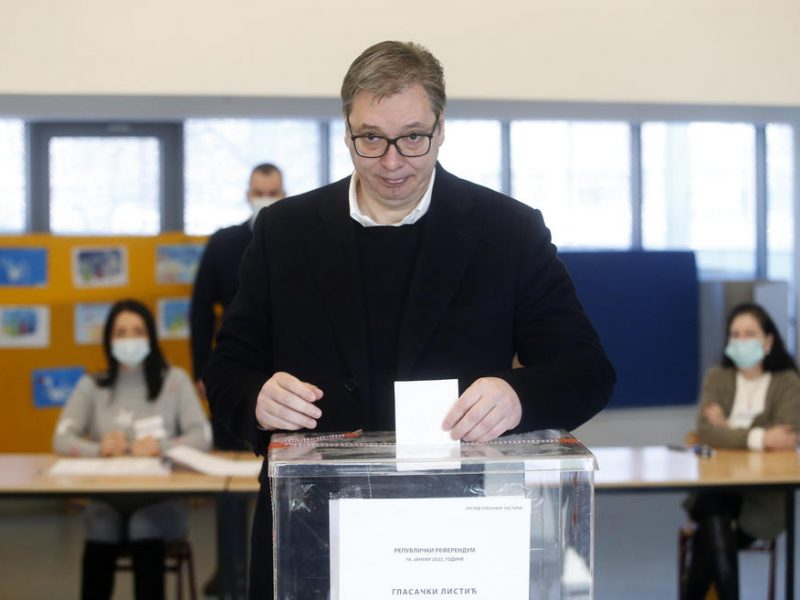 The president of the ‘Black and White’ (Crno na Belo) movement in Serbia, law professor Vladimir Vuletić, said he would file criminal charges against Serbia’s President Aleksandar Vučić, for what he described as “bribing voters” ahead of the 3 April elections.

The opposition largely boycotted a parliamentary election in 2020, allowing Vučić’s SNS party and its allies to secure 188 seats in the 250-seat parliament.

A veteran politician who served as information minister in 1998 under former strongman Slobodan Milošević, Vučić has transformed himself from a nationalist firebrand to a proponent of EU membership, military neutrality and ties with Russia and China.

Ponos has accused Vučić of using the war in Ukraine in his campaign to capitalise on people’s fears.

Opposition and rights watchdogs also accuse Vučić and his allies of an autocratic style of rule, corruption, nepotism, controlling the media, attacks on political opponents and ties with organised crime. Vučić and his allies have repeatedly denied all those allegations. 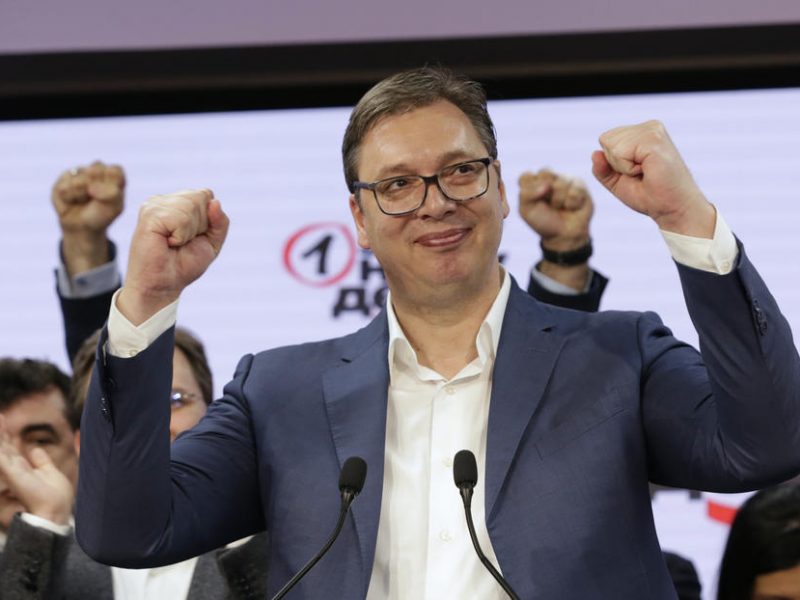 Serbia’s President Aleksandar Vučić and his ruling SNS party are set to win another mandate in the presidential and parliamentary elections due on 3 April, even though the opposition is mounting the most serious challenge to his rule since 2014.