By Julija Simić | EURACTIV.com and EURACTIV.rs

Serbian President-elect Aleksandar Vučić celebrates after declaring a victory in Belgrade, Serbia, 2 April 2017. Vučić won by a majority of votes in the first round. [Andrej Cukic/ EPA]

Observers are giving the best chances to a non-party candidate who would “serve the purpose” until a possible election.

After he swore an oath on the Constitution of Serbia and a copy of the Miroslav Gospel, the oldest preserved manuscript in Old Church Slavonic, Vučić took over the presidential office from predecessor Tomislav Nikolić.

Upon assuming office, Vučić said he had no dilemma as to what he should do for Serbia and its future, adding that he was ready to do literally anything for that future, without getting anything in return.

“I have no doubt as to what I should do for Serbia and the future. I must give absolutely everything and I don’t want to get anything at all in return. Except the judgment of my actions that will remain in history. History does not envisage sanctions, but for me, that judgment is equal to the last judgment,” Vučić said in the Serbian Parliament after his swearing-in.

Speaking about priorities, Vučić said he would work primarily on peace, that he would talk with everyone and offer compromise and solutions because that was the foundation of progress and stability.

Vučić further said that, as president, he would continue to lead a policy of military neutrality, adding that there should no doubt about Serbia’s European path and the desire to build a democratic society and continue good relations with Russia and China.

It is still uncertain whether Vučić will, like his predecessor Nikolić before him, step down from the helm of the party he has been leading for the last five years. That decision is expected to be announced in the next few days.

Vučić entered Serbian politics in the 1990s as an official of the Serbian Radical Party, whose leader is Hague tribunal indictee Vojislav Šešelj. During that time he also occupied the post of minister of information.

Vučić has been prime minister since 2014, prior to which he was the first deputy premier in the cabinet headed by Ivica Dačić.

He has been careful to maintain good relations with Brussels and Washington, which is especially visible in times of crisis.

Looking for a prime minister… or puppet

After MPs on 31 May acknowledged the prime minister’s resignation, the designated 30-day period for the election of a new government began to unfold.

For the time being, Ivica Dačić, the leader of the Progressives’ key coalition partner – the Socialist Party of Serbia – is behind the wheel.

According to announcements from the government, Serbia ought to get a new prime minister in the next 20 days, prior to Vučić’s inauguration, scheduled for 23 June. If that does not happen, which seems unlikely, a new election will be called.

There has been speculation regarding the identity of the new prime minister since Vučić’s victory in the first round of the 2 April presidential election.

There are now three options – for the new prime minister to be someone from the Serbian Progressive Party, who will unquestioningly obey Vučić, for the cabinet to be headed by an expert, i.e. a non-party figure, or for the president of the Socialists, Dačić, to arrive at the cabinet’s helm.

The Progressives believe the premier should be someone from their ranks, because according to Minister of Transportation Zorana Mihajlović, was logical given Vučić’s landslide election victory.

Serbian President-elect Aleksandar Vučić, who scored a convincing victory in the first round of the election on 2 April, will take his time appointing his successor as prime minister, a position he’s held a firm grip on for three years. EURACTIV.rs reports.

As far as the Socialists are concerned, Dačić himself says he does not think he will be the new premier because the West doesn’t like him.

“I think the chances of my being prime minister are slim because I am not to the West’s liking,” Dačić told BETA. “At this time it is the most important to me that a new government is elected as soon as possible and for me to finish the temporary mandate (of first deputy prime minister who technically fills in for the Prime Minister),” said Dačić.

Minister of Finance Dušan Vujović has been mentioned as a potential candidate for premier from the ranks of non-party figures, along with an even more likely candidate, Minister of Public Administration Ana Brnabić.

Some who are well-acquainted with the situation in the country believe that Vučić will opt for a non-party candidate “for a while”, until another snap general election.

And while it is not expected that Vučić will call an election as early as in June, there is speculation it may be held in the fall or next year, when the election for the Belgrade City Assembly is due. 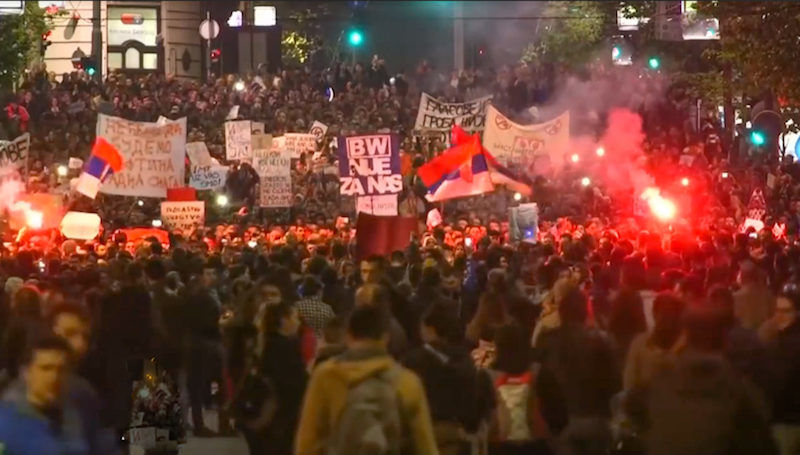