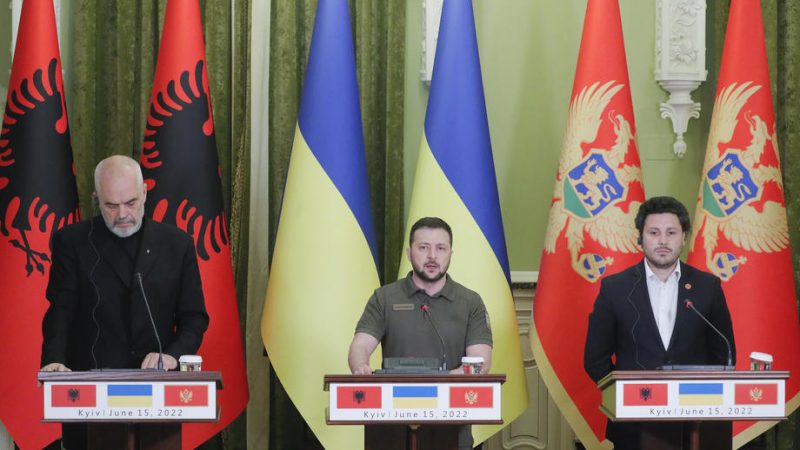 Three of the four Western Balkan EU candidates have signed a joint statement with Ukraine in support of its EU candidacy, in a signal that fast-tracking the war-torn eastern country would not mess up their own slow-moving EU integration but should “complement and strengthen each other”.

The statement was signed during a visit to Kyiv on Wednesday (15 June) by Albanian Prime Minister Edi Rama and his Montenegrin counterpart Dritan Abazović.

The two held a press conference with Ukrainian President Volodymyr Zelenskyy during a trip to the war-torn country, while North Macedonia’s Prime Minister Dimitar Kovačevski joined via video link.

“Our states – Ukraine, the Republic of Albania, Montenegro and the Republic of Northern Macedonia – must become full members of the EU, and we agree that our countries are not competitors on this European path but only complement and strengthen each other’s capabilities,” Ukraine’s President Volodymyr Zelenskyy said.

His sentiments were echoed by Abazović, who said it was a moral obligation to visit Kyiv and support the Ukrainian people and their dream of a better life. He had urged all six Western Balkan leaders to join in the trip to Kyiv but Serbia, Bosnia-Herzegovina, and Kosovo did not heed the call.

The statement of support comes as EU leaders are set to meet with their Western Balkans counterparts, on 23 June, before a crucial EU summit meant to discuss Ukraine’s potential candidate status in the bloc.

Albania and North Macedonia, though official candidates, have been in the waiting room for years, blocked by issues of corruption, and asylum as well as, in the case of Skopje, a veto from neighbouring EU member Bulgaria.

EU diplomats believe no major progress is expected for either country, particularly as Bulgaria’s six-month-old government was on the verge of collapse.

Enlargement will in general remain a controversial topic because there has been virtually no progress in the last decade, despite assurances of “the clear European perspective” from the European Commission.

“After Russia’s attack on Ukraine, and in light of the influence from third parties in the Western Balkan region, which are the most vulnerable on the European continent, enlargement has become a security question,” North Macedonia’s Kovačevski told EURACTIV in an exclusive interview earlier this month.

Asked about reactions if Ukraine were to be granted candidate status in June, which has often been framed as ‘jumping the queue’ before Western Balkan countries, Kovačevski said: “They deserve to fight for their prosperity and for their future in the EU”.

“We can only wish them luck in their EU candidacy aspirations, but the EU has to be aware that it has to deliver, not only promise,” he said.

Ukrainian officials have been presenting their country’s bid for EU candidate status as an opportunity for the Western Balkans to restart the stalled process.

Ukraine’s Deputy Prime Minister for European integration, Olha Stefanishyna, told EURACTIV last month that “if it were not for the Ukrainian application, the enlargement dialogue might not have been restarted for the Western Balkans”.

“We consider this not as an obstacle but as an opportunity for the Western Balkans to reboot the whole narrative about EU enlargement,” Stefanishyna said.

Out in the cold

For Kosovo, which only became independent in 2008, and Bosnia and Herzegovina, however, the prospects are even gloomier. Both countries are trying to get candidate status. Bosnia has already applied but has failed to meet a number of recommendations.

Kosovo, which is not recognised by five EU countries – Spain, Cyprus, Romania, Slovakia, and Greece – said earlier this month it will apply for EU membership at the end of this year.

In Kyiv, Rama implored Ukraine to recognise Kosovo, hinting it could help their own EU progress.

“Ukraine has not recognised Kosovo, and I said during the press conference and publicly that you should reconsider the recognition of Kosovo because they deserve it.”

“It would be good for Ukraine to convey the right message about the new European reality we want to build.”

Notably absent from the visit and agreement was Serbia, the only European country apart from Belarus, that has not joined in the EU’s sanctions on Russia. Serbia gets virtually all of its oil and gas from Russia and has been a traditional ally of Moscow.

Belgrade has also seen a number of pro-Russia rallies since Moscow’s invasion.

On Monday (13 June), the European Parliament’s Foreign Affairs Committee (AFET) said Serbia should demonstrate its commitment to policies and standards and is expected to reconsider its relationship with Russia.

Lawmakers also voiced regret that Belgrade-Moscow flights continued to operate normally while the EU had closed its airspace to Russian aircraft.

Turkey, meanwhile, has been a candidate for EU membership since 1987 but talks have floundered in recent years, with Brussels increasingly critical of President Recep Tayyip Erdoğan’s authoritarian rule.