Avant-garde proposal for EU enlargement to the Western Balkans

By Michael Emerson and Milena Lazarevic 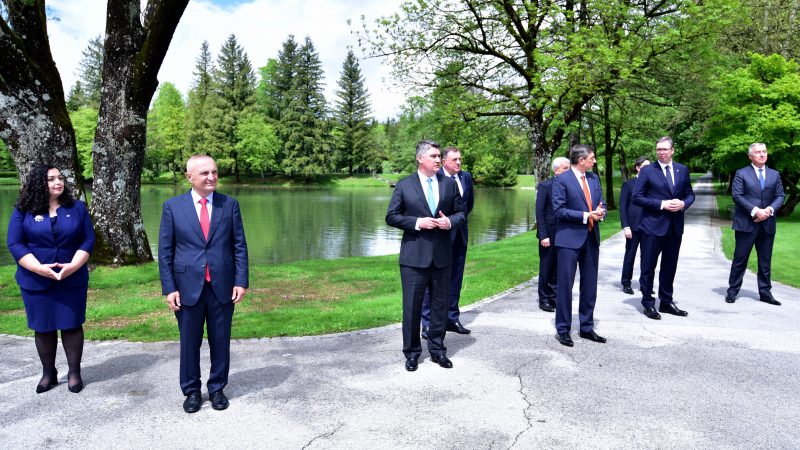 Presidents of Kosovo, Albania, Croatia, members of the Bosnian presidency, presidents of Slovenia, North Macedonia, Serbia, and Montenegro pose for photo at Brdo pri Kranju, Slovenia, on 17 May 2021. [EPA-EFE/IGOR KUPLJENIK]

A binary ‘in or out’ concept of membership has become obsolete for a region that has been on its path towards the EU already for two decades. A group of think tanks have now come up with a proposal to unpack the accession process and allow progressive membership in stages, write Milena Lazarevic and Michael Emerson.

It is evident that no one is happy with the current status quo in the Western Balkans. As things currently stand, it is unlikely that the countries of the region will make a sudden and substantial progress towards the fully-fledged membership.

In order to break the impasse, it is necessary to move away from some features of the precise model of accession used for the previous EU enlargements, while keeping the full membership as the final goal.

The idea proposed by the network of Western Balkan think tanks, the Think for Europe Network (TEN), and Brussels-based Centre for European PolicyStudies (CEPS) is that the accession process should be unpacked into functional/sectoral and institutional elements permitting partial and progressive membership in stages, based on the achieved level of progress under strict monitoring and conditionality.

The details and conditions for such arrangements would vary as between the EU Council, the European Commission, and the European Parliament, as well as consultative bodies, agencies, and programmes of the EU – in some cases just structured policy dialogue, in others observer status and fuller participation.

In fact, the tangible benefits for citizens and possibilities for the gradual integration into EU policies and programmes – including possible observer status in relevant EU meetings on matters of substantial importance to them – are already emphasised in the revised enlargement methodology, as means to increase the political appeal of the process for the region.

However, these ideas have largely remained unaddressed in the aftermath of its adoption. Consequently, as things currently stand, the major political and socioeconomic benefits of the accession process are still likely to arrive only at the point of accession.

The key instruments for implementing this proposal would be, first, an adoption by the EU of a legally precise text defining the progressive steps in the differentiated accession process, and, second, legally binding agreements with the candidate states marking the passage from step to step.

The precedents for such kind of integration already exist, the European Monetary Union and the  Schengen being the key examples, but additional efforts need to be invested into full development of the models for the specific stages of membership and their accompanying conditionalities..

In order to properly apply differentiated integration to the enlargement process, decisions to advance access to certain rights, or if need be, to withdraw them, would need to be based on a more detailed, coherent, and quantifiable methodology for rating performance on the various ‘chapters’ in relation to better specified conditionalities.

The civil society in the region has frequently warned that the existing rule-of-law negotiation framework was ineffective when it came to tackling the issues of state capturea nd democratic backsliding in the Western Balkans.

By equipping the phased approach to membership with improved methodology, it would not only ensure proper understanding of deeper  governance issues but would also reduce the risks of damage to the functioning of the EU through veto powers in the hands of more fragile democracies.

Improvements in that regard can also contribute to making the process more credible and convincing in the eyes of all EU member states.

What better way to start addressing these proposals than by putting them on the agenda of the Conference on the Future of Europe.