‘Both Sides’: The West’s equalisation of blame enables Balkan aggression 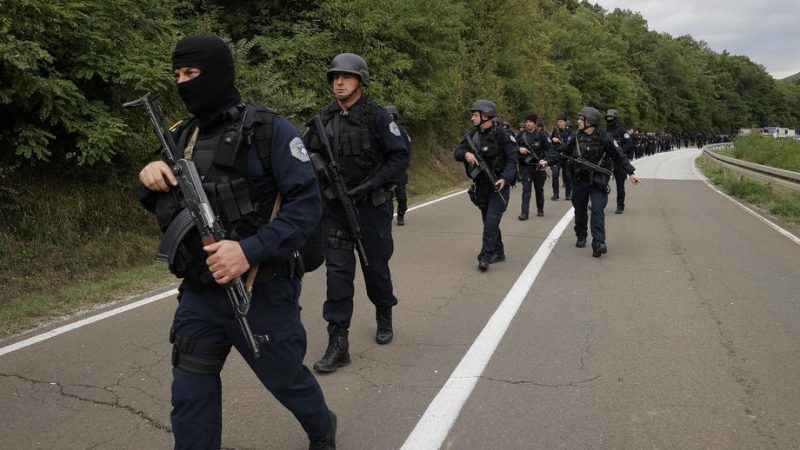 The EU’s policy of equalising blame in the Western Balkans has fuelled Serbian aggression against Kosovo, writes Sidita Kushi.

In the 1990s, as the Butcher of the Balkans, Serbian strongman Slobodan Milosevic was committing ethnic cleansing in Bosnia and Kosovo (admitted by Serbian officials), the West was calling on all parties to de-escalate the violence. Despite Serbia’s campaigns of systematic violence against weaker non-state actors and civilian populations, and despite the grave power asymmetries amongst the parties, the West was desperate to safeguard Balkan stability by refusing to take sides.

By the end of the 1990s, Milosevic’s Serbia had committed crimes against humanity against Bosnian Muslims and ethnic Albanians in Kosovo, amongst others. It had committed genocide in Srebrenica under the watchful eye of the United Nations and NATO, which it now ardently denies.

In trading human rights, justice, and democracy for a false sense of stability, the EU allowed genocide to take place on its doorstep. Then, it disingenuously framed one-sided aggression as a two-sided conflict with equal culpability.

Still, it was the US-led NATO military intervention that finally ended the ethnic cleansing in Kosovo in 1999 and ousted Milosevic from power for good. It was Western actors who supervised and guarded the new nation of Kosovo into semi-statehood in the 2000s, and for this, Kosovo remains grateful and eager to sacrifice.

But twenty years later, the EU and NATO have not learned the many lessons of the past. Unfortunately, the pathway of appeasement that defined the early 1990s defines the West’s policies on the Balkans today. Two decades later, the EU, especially, utters all the right values but continues its complicity to violence by deploying a “both sides” narrative to pacify the aggressor state, Serbia.

For a decade, Serbia has required that cars with Kosovo license plates obtain Serbian license plates when crossing the border into Serbia. Kurti’s government abhors the practice and is eager to do away with such restrictions, but for as long as Serbia enforces the measures within its borders, Kosovo will do the same with Serbian license plates. Reciprocal measures are a small way for Kosovo to assert its sovereignty despite its contested international status and despite Serbia’s ongoing, successful de-recognition campaign and denial of past war crimes.

Kosovo’s domestic policies, however, prompted protests and barricades by ethnic Serbs in northern Kosovo – leading to the attack and burning of an Interior Ministry Vehicle Registration Center and a Civil Registration Office by those opposed to the temporary license plate measures.

In response, the Kurti government sent in the Kosovo Special Police Units to maintain a peaceful environment for the enforcement of the reciprocal domestic law, which Serbia has imposed on Kosovo vehicles since 2008.

But any attempt of Kosovo to mirror Serbia’s policies is portrayed as an act of aggression by Serbia and its allies. In a matter of days, the Serbian government has formed a militarised zone on Kosovo’s border, deploying tanks, warplanes, and armoured vehicles. In a matter of days, Vucic’s government in Serbia threatened military force against Kosovo – all because Kosovo dared to echo Serbia’s own policies back at it. In an interview on 26 September, Vucic even issued a 24-hour ultimatum for NATO to react.

“Both Sides Must De-Escalate”

At the height of this security dilemma and the threat of violence by Serbia against Kosovo, the Western community is silent at best and complicit at worst. In all its current public statements, the EU has equated Kosovo’s reciprocity measures to Serbia’s blatant militarisation at the border.

NATO’s leadership, too, has equated Kosovo’s domestic police force to Serbia’s military threats, tanks, and warplanes. In urging “both sides” to de-escalate the crisis and thereby return to an unequal status-quo, the EU and NATO have firmly emboldened Serbia’s aggression and revisionism.

While the US Department of State is sending Gabriel Escobar, its top Western Balkans official, to Brussels for EU-led talks, it too echoes the both sides narrative. But how can there be “both sides” or any appeal to fairness when one side is consistently allowed to play by a different set of rules – or when one side is not allowed to implement the policies that the other side has implemented with impunity?

The Serbian government’s militarisation along Kosovo’s border should not be understood in isolation. It is part of large historical pattern that has driven Kosovo-Serbian relations since before the fall of Yugoslavia.

But Serbia’s disproportionate response to Kosovo’s reciprocity measures serves to blur the dynamics of the past and falsely portray Serbia as the aggrieved actor. Serbia escalates a political crisis only to later receive Western overtures and political concessions for eventually backing off.

The West generally ignores Serbia’s transgressions, such as its campaign that has convinced at least 15 countries to “revoke” their recognition of Kosovo, its purchase of sanctioned weapons from Russia, or its growing authoritarianism.

On the other hand, the international community asks that Kosovo forego much of its sovereignty or face dire consequences, including a Western-orchestrated coup. They do not rebuke Serbia or compel the Serbian justice system to seek convictions for the deaths of thousands of victims in Kosovo, for example.

Lest history repeat itself

Just like in the 1990s, the EU’s calls for de-escalation are drenched in “both sides” rhetoric, which confers false neutrality. Such equal culpability language is the hallmark of the complicity to violence and the first step that powerful actors take to distance themselves from their responsibility.

They attempt to minimise the past in Kosovo, which is characterised by a conscious, evidenced, and systematic Serbian state policy to murder and displace ethnic Albanians. By equalising the blame amidst undeniable power asymmetries between Serbia and Kosovo in the name of stability, the EU, NATO, and the US indirectly enable Serbia’s current aggression.

Just like in the 1990s, if the “Balkan Powder Keg” explodes once again, the blood will be on the hands of the appeasers.

Western actors must discard the dangerous language of equal culpability when addressing the unfolding crisis between Kosovo and Serbia, lest history repeats itself. Western diplomacy and values are surely required to resolve this regional crisis, but they must not be brandished to shield the aggressor and punish the victim.