EU-Serbia: A stagnation comfortable for both sides 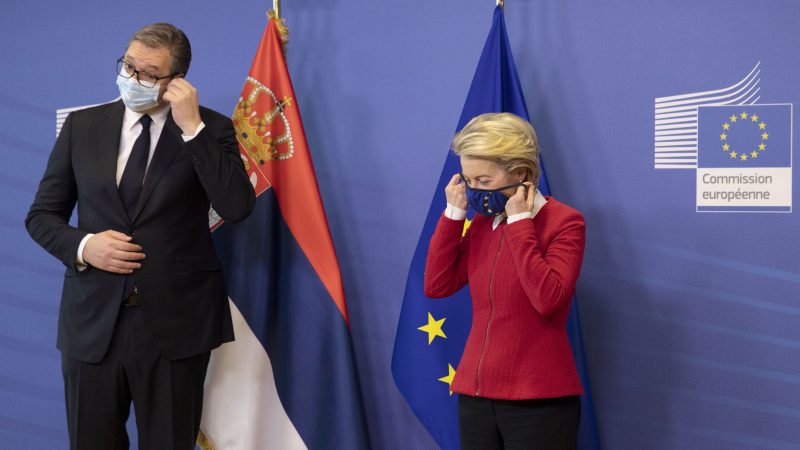 No progress in Serbia’s EU integration process appears to be a solution that fits both the EU side, which is increasingly critical toward the authoritarian trends in Belgrade and the lack of progress with Kosovo, and the ruling bloc in Belgrade, which doesn’t see EU relations as important for its voters, writes BETA agency.

BETA agency is a Serbian news agency headquartered in Belgrade, working in partnership with EURACTIV.

Serbia is still not making any steps forward as far as European integration goes, as the EU has decided not to open a single negotiating cluster for Serbia in this half-year term.

Belgrade says it’s neither surprised nor disappointed, because together with the refusal came an offer to have another intergovernmental conference with the Union – a consolation prize and a sign that the refusal might not be absolute.

Yet the accession negotiations have been deadlocked, some would say completely halted even. Serbia has made very little progress in the accession process over the past two and a half years, opening two out of 35 chapters, both back in 2019. Last year Serbia didn’t open any, nor has it been any more successful in the first half of 2021.

At this point the EU has opened 18 chapters for Serbia, and two out of 35 are preliminary closed. The process started in January 2014, and opening a mere half of the accession chapters in seven years is a very bad result, reflecting Serbia’s very slow pace on its path to EU membership.

The authorities in Belgrade have accepted a new enlargement method, introduced at the initiative of France. The chapters of the acquis are grouped into six clusters, each entailing separate negotiations.

When the new rules were inaugurated, Serbian President Aleksandar Vučić said at a meeting with his French counterpart in July 2020 that Serbia had decided to accept them as “more favorable and better targeted for Serbia.” Yet Serbia is missing the opportunity to use them.

The plan was for the Union to open two negotiation clusters – number three, Competitiveness and Inclusive Growth, and number four, Green Agenda and Sustainable Connectivity, following a recommendation by the European Commission.

EU members remained divided though, a majority refusing to give Serbia a green light to open the two clusters. A group of EU states led by Germany was against it, and the other, including France, favored the opening.

Chief reasons for the refusal exist on two sides. First and foremost, a number of EU states, clearly a majority, believe that Serbia has made no progress in the domain of basic rights and freedoms, covered by Chapters 23 and 24, namely, judiciary, fundamental rights, justice, freedom and security.

Serbia has already opened the two chapters, as well as the cluster they were included in, but since it’s a group of vital issues, meeting the criteria will be monitored throughout the negotiations, and the conduct of a candidate against the backdrop of those will have an impact on all other clusters until the end of the process.

For quite a while now Serbia has been criticized by the EU for neglecting fundamental freedoms and the rule of law, which regular progress reports by its institutions, the European Commission in the first place, make perfectly clear.

The Commission was very critical of Serbia in last year’s report, and so was the European Parliament in a report released last March.

Most of the criticism was targeted at the ruling party’s absolute domination over state institutions, the abuse of the dominance by the ruling coalition, political pressures, a lack of media pluralism and the freedom of speech, but wide-spread corruption and ineffective struggle against organized crime topped the list of objections.

In a nutshell, the decision not to open a single negotiating cluster with Serbia is a culmination of a long string of warnings that Serbia doesn’t cope very well with deficiencies in the work of democratic institutions (elections, parliament, media, etc.), and the level of corruption.

Another important reason for the EU to refuse to open new accession clusters must be that it wanted to wait until Serbian constitutional change was over, as it’s targeted specifically at the section of the Constitution referring to the judiciary, the election of judges and prosecutors.

The process has been brought before the Parliament, and a referendum allowing the people to have a final say in the matter is expected to take place next fall. The constitutional amendments in the domain of judiciary is an unfinished job Serbia has been delaying for years.

The authorities in Belgrade are not particularly disappointed at the Union’s refusal to unblock the negotiating process, having responded to it rather indifferently. The Serbian minister in charge of the country’s EU accession, Jadranka Joksimovic, said that the cabinet wasn’t surprised.

The minister underlined that a decision to schedule a new EU-Serbia intergovernmental conference for 22 June was a sign that the Union fully supported Serbia’s accession.

The reason for the lukewarm reaction is that Serbian membership of the Union is not that important for the ruling bloc’s voters, and the country’s successes and failures on its path to Europe have no impact on their views.

Officially, accession to the EU is a government priority and the president’s prime concern, but they know full well that decisions in the process can’t yield votes or harm their ratings.

In addition, Belgrade explains that it’s not only an unprepared Serbia to be blamed, but the EU as well, as it hesitates to apply the new enlargement model until it makes sure that a candidate has made sufficient progress.

It’s partly true, as Albania and North Macedonia are still waiting to be included in the negotiating process under the new model. Caution is good for the Union though, because it will find it very difficult to change the rules once they are fully implemented.

The stagnation in the talks with Serbia, being the result of a political decision, certainly has to do with the sluggish normalization talks between Serbia and Kosovo. A breakthrough in that process is the leading political condition for Serbia to move forward in the EU accession, but it has yet to be made.

The EU-mediated talks between Belgrade and Pristina have been deadlocked for more than two years, and a move to restart them coincided with the European decision-making on whether to open new clusters for Serbia.

Clearly, most of the Union wanted to see progress in the Kosovo process before deciding on the latter.