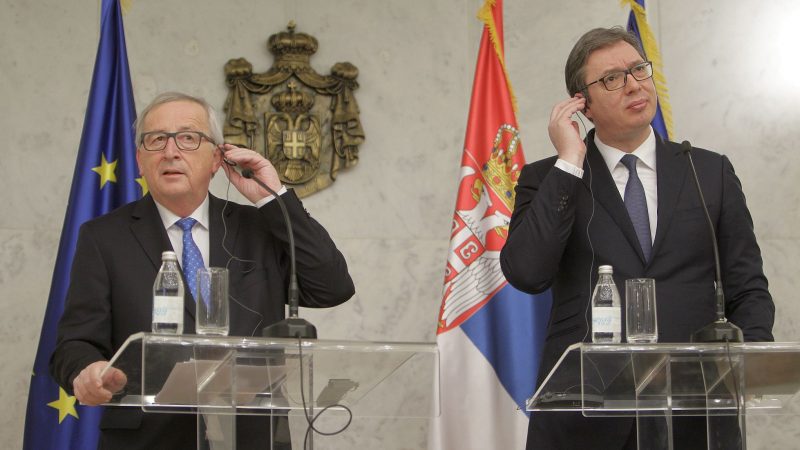 Statements that starting EU accession talks with a candidate country directly implies membership are false. Sena Marić explains why communication of enlargement  – both by EU institutions and in the member states – should be based on facts and not on dangerous play with words and emotions.

Sena Marić is a senior researcher and programme manager at the European Policy Centre (CEP) in Belgrade.

In her runup campaign for the May 2019 European Parliamentary elections in France, Nathalie Loiseau, a leading figure in Macron’s Renaissance movement and a former minister for European affairs, proudly declared that she directly blocked the enlargement of the EU to Albania and North Macedonia.

In the same month, l’Obs, one of the most widely read and influential weekly magazines in France, published an article which started by noting that “in 2012, the EU promised to Serbia that it will join the EU maybe even by 2025,” and which, unsurprisingly, continued in a rather sceptical tone about enlargement to the Western Balkans.

These statements, among numerous that can be noted in public discourse in EU member states regarding Western Balkans, are founded on the premise that negotiating EU membership, or even starting accession talks, directly implies EU membership as an outcome.

Anyone familiar with the EU enlargement policy to the Western Balkans knows the actual difficulties of this process very well.

Unlike in the case of the “Big Bang” enlargement from 2004 and 2007, when the EU rhetorically entrapped itself to accept new members by giving them the promise of membership, in the case of Western Balkans it has carefully selected its words to convey its real level of commitment.

At the Thessaloniki Summit in 2003, the region was promised “…unequivocal support for the European perspective”, while “the speed of movement ahead lies in the hands of the countries of the region.”

Instead, it continually insists that the outcome of the negotiation process depends on each candidate’s fulfilment of membership criteria. The conclusions of the EU-Western Balkans summit in Sofia from 2018 reconfirmed the European perspective of the region and never even mentioned the word “enlargement”.

At the end of the day, the EU’s legal framework places EU member states as the “masters” of EU enlargement policy. In fact, making decisions in each stage of the EU association and accession process requires the unanimity of all EU members.

Practically, this means that each member state has at least 70 occasions to pause or block accession negotiations (such as during the opening and closing of each of the 35 negotiating chapters, when deciding on opening, interim and closing benchmarks for a negotiating chapter, or regarding the possible activation of “imbalance clause” – in case of backsliding on Chapters 23 and 24, among others).

Multiply this number by 28 member states and it turns out that both in theory and in practice, member states have about 2,000 different opportunities to block the negotiation process for EU accession.

Decision makers from member states should be familiar with the mechanisms of EU enlargement policy as well. In fact, I am sure they are, which Madame Loiseau demonstrated later in her statement. Strangely enough, these same stakeholders seem to underestimate the consequences that the simplification of this complex policy may cause.

Especially relevant currently is the indistinct future of North Macedonia, where accession talks with the EU were, yet again, postponed. The EU did NOT promise to this country that it will join the EU: it did, however, promise that it will open negotiations once conditions are met.

North Macedonia has met all of the required conditions for opening accession talks, but still, some EU members fear domestic pressure and are ready to betray EU promises.

While many colleagues from policy and academic circles have presented good arguments on why and how the costs of a negative decision on opening negotiations would be higher than the benefits of addressing domestic concerns, I would like to step back for a second: would we be here today had the responsible authorities communicated enlargement based on facts?

We can only guess, but I would put my money on there being a very different situation.

In Serbia’s recent case, I feel that we have lost a lot of our pro-EU momentum in the period between 2012 – when Serbia became a candidate for EU membership – and 2014, when accession talks were launched – because of the Union’s de facto prioritisation of the Kosovo issue over all other membership criteria, resulting in several consecutive postponements of the opening of accession talks.

What we can do now is to determine who are the responsible stakeholders for communicating both the facts and the false interpretations of EU enlargement policy. I believe that many parties have some degree of role and responsibility.

The European Commission could enhance its level of interaction with EU member states in this respect, by participating in sessions of national parliaments when these issues are discussed, for example, in order to provide explanations for, and answers to, MPs’ questions.

Furthermore, the European Commission and EU member states should restore mutual trust when it comes to gathering information on realities of meeting criteria in the EU aspirant countries.

Political authorities in the EU member states should base their stances on Western Balkan enlargement on proper information, the minimum one could expect from pro-EU oriented politicians who supposedly uphold European values, instead of resorting to dangerous play with words and emotions.

Prominent independent and unbiased media outlets are also supposed to report on such issues in an evidence-based and professional manner.

Therefore, my plea to the EU in terms of enlargement to the Western Balkans would be to get back to basics: to call things by their real names. Doing so would allow the Union to act responsibly, bringing a consistency to the application of membership conditionality and to the delivery of its own commitments.