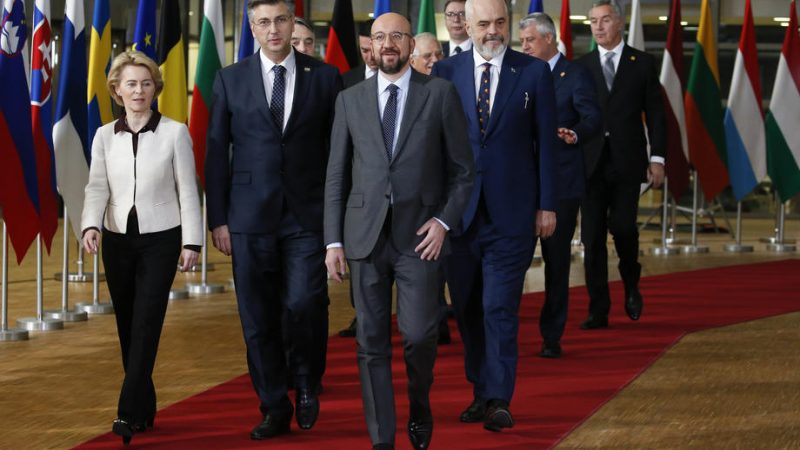 EU leaders should reject any new talk of ethnic division and secession in the western Balkans and finally make good on their promises to the region’s nations, write Tineke Strik and Viola von Cramon-Taubadel.

Tineke Strik and Viola von Cramon-Taubadel are MEPs for the Greens/EFA group in the European Parliament.

EU accession and the preceding process are intended to serve as a reliable path towards stability, democracy and prosperity, bringing peace and reconciliation to the Western Balkan countries after its tragic recent history in the 1990s. But in particular in Bosnia and Herzegovina, the past few months have been characterized by attempts to deepen ethnic division and exclusion.

Dangerously, the realistic prospects of joining the EU for the Western Balkans had already been seriously undermined for years, caused by a lack of strategy and disagreement among EU leaders in Council that led towards broken promises, a loss of the EU’s credibility and status as a reliable partner in the region and a huge political vacuum.

This vacuum offers an ideal playground for foreign actors such as Russia, which openly tries to prevent the Euro-Atlantic integration of all countries in the region and leaves an unstable territory open for manipulation and interference at the heart of Europe. And, it encourages those actors who had already pushed for new borders for their ethno-nationalistic concepts through waging wars. They now try their chance again to meet their war aims.

These were mainly the reasons for ethnical cleansing and genocide that occurred in the republics of former Yugoslavia in the 1990s.

Furthermore, the political void left by Commission and Council was eagerly filled by a different tone of voice shamelessly promoted from within the EU, when last month, a non-paper surfaced, allegedly by Slovenian Prime Minister Janša, calling for a redrawing of borders in the region along ethnic lines and for the “peaceful dissolution” of Bosnia.

Previously Kosovo-Serbia had been in the focus of irresponsible plans to swap territory according to ethnic criteria, which was at the time regretfully even supported by former HR/VP Mogherini.

Now the current hot-spot Bosnia and Herzegovina is surely marking a new low in the EU’s Western Balkan politics. This clearly looks like an attack of the Croatian and Serbian nationalists to further divide the country and to even dissolve it. The recent tsunami of non-papers or rumours about non-papers is not an accident, but a well-orchestrated policy by destructive, cynical and backward-looking forces within the region, the EU and probably beyond.

The failure of EU leaders to immediately react and harshly reject the dangerous ideas raised in the non-paper, does contribute to the disruption and strengthening of voices which have been pursuing ethnic division in the region already for a long time. By tolerating this narrative, the EU allows this extremely dangerous amplification of denial of multiple genocide, ethnic engineering and cleansing to happen.

On a moral and psychological level, the massive spread of such ideas from the 1990s is extremely difficult and threatening for the many victims of the wars. They remember well that everything started with discussing borders.

Instead, EU leaders should be among the first ones to publicly denounce each and every call which hints to redrawing borders, no matter whether this is coming from forces within the EU or Bosnian ethno-nationalistic political leaders. Our Western Balkans strategy should be led by the clear promotion of the EU’s common values such as equality, democracy and the rule of law.

In a country where division along ethnic lines is so deeply incorporated into the constitution and attitude of the political elite, it is of crucial importance that the EU provides leadership and guidance on how to work towards unity and overcome this division.

The European Commission and the EU Delegation on the ground should be leading the reform process by outlining a clear road map on the order in which it expects Bosnia to implement the necessary reforms for becoming a candidate country and move towards the start of accession negotiations, and what these reforms concretely entail.

The main objective should be to end discrimination, especially of those citizens who are not identified as one of the three ethnic groups. Concretely, constitutional reforms are urgently needed to implement all rulings of the European Court of Human Rights. In this context, the EU should facilitate a very broad and inclusive dialogue. Such a process within democratic institutions should ensure the participation of all political actors, institutions, civil society representatives, and academia on the nature of the country’s future statehood.

The alternative, we can currently observe, is to leave the order and substance of reforms for interpretation by only one or two Bosnian political party leaders representing ethno-nationalistic ideology. The entire existence and power of their parties is mandated by the ethnic division enshrined in the constitution. Therefore, we logically see an endless postponement of the necessary constitutional reform, and the reforms, which they are willing to execute, are interpreted in such a manner that these maintain or further deepen ethnic divisions. As we saw in recent months, ethnic nationalism and calls for secession triumph in this scenario.

It must be admitted that it is no easy task to overcome division and get the main political forces to cooperate. However, as still a large majority of the population favours EU accession, this should be interpreted by all actors as a huge incentive for cooperation to enable the execution of necessary reforms.

Today’s Foreign Affairs Council at which the EU Foreign Ministers will decide again on the Western Balkans’ future is the perfect opportunity to firmly speak out against any ideas of ethnic division and secession. It is high time for the EU and its member states to come forward with concrete and committed timetable on delivering on its promises, thus filling the political vacuum with a renewed, honest and credible EU engagement in the region.