Our enduring resolve in Bosnia and Herzegovina 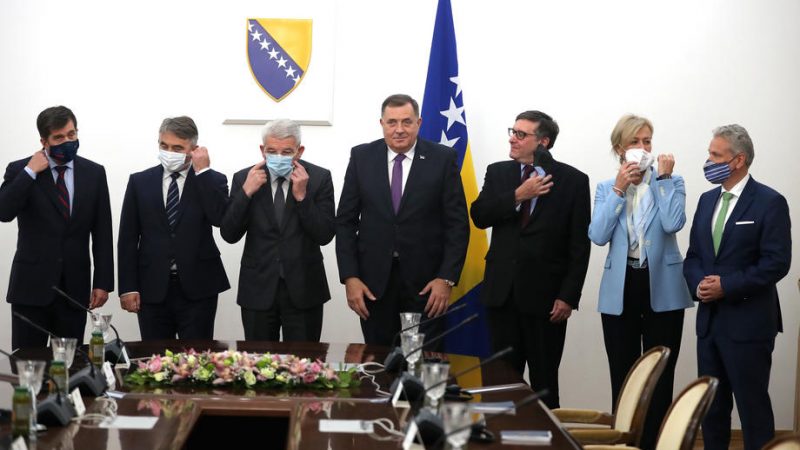 Twenty-six years after the Dayton Peace Agreement, Bosnia and Herzegovina (BiH) is facing its most serious challenge since the end of the war, writes Derek Chollet.

Derek Chollet is the Counselor of the US Department of State.

The three fundamental pillars that sustain BiH’s delicate peace – power-sharing among the three constituent peoples, the protection of rights for all citizens, and the ability to use the constitutional framework to empower institutions necessary for a functioning state – are all fracturing.

BiH’s citizens are leaving in droves for European countries where rule of law protects their rights and where corruption does not threaten their future.

I heard this first-hand on Tuesday when I sat down with a group of young people – just a small sample of the generation that grew up after the war.  I was inspired by their decision to remain in BiH and by their creativity and commitment to improve their country.

And then I was disheartened to hear them talk about how difficult it is to make a change here as political leaders focus on their own fortunes rather than the future of their people.

Common-sense reforms on the table now would go a long way in changing that situation.  They would ensure that all citizens have the right to run for office, correct imbalances in power-sharing, give citizens greater confidence that their votes count, improve the investment climate, and create better safeguards against corruption.

Bosnia and Herzegovina’s leaders must seize this moment and deliver to young people like those I met today the future they deserve.

The United States supports the prosperity of the Republika Srpska entity, the Federation of BiH entity and the Brcko district within one BiH. Unfortunately, instead of seeking a common good, some party leaders are working to undermine a functioning state.

Withdrawal from state-level institutions, as the Republika Srpska entity’s ruling coalition threatens, would lead to an economic dead-end, further weaken rule of law, and damage prospects for economic recovery and regional integration.  It would damage regional stability and would do nothing to improve the lives of ordinary people.

There is another path.  The United States supports steps to advance progress toward BiH’s EU integration and NATO membership if it achieves the necessary reforms and consensus.

That is why Secretary Blinken and European Union High Representative Borrell reiterated in their October 20 joint statement that the United States and EU see Bosnia and Herzegovina’s future in Europe.

It is also imperative for the international community to address the serious threat that corruption poses to BiH as well as the wider region.

President Biden’s recent Executive Order to expand the Western Balkans sanctions regime puts those who would undermine Dayton or other international peace agreements, as well as enablers of corrupt acts, on notice.

The United States and European partners will continue to impose consequences for destabilising behaviour and target and disrupt corrupt networks, while supporting BiH citizens’ expectations that leaders will implement common-sense rule of law, electoral, and economic reforms.

None of this will be easy.  But the United States is committed to engaging intensively with BiH leaders and our partners in the international community to bring an end to the political crisis and a return to important work of ensuring functional institutions and basic reforms necessary for a stable and prosperous BiH.

We strongly support High Representative Christian Schmidt in his efforts to engage all parties to help BiH fulfil the criteria necessary to end international supervision. Nearly thirty years ago, then-Senator Joe Biden led the call to action to end a terrible war that claimed nearly 100,000 lives.

Today, as president, his administration is as committed as ever to a stable, peaceful future for Bosnia and Herzegovina.