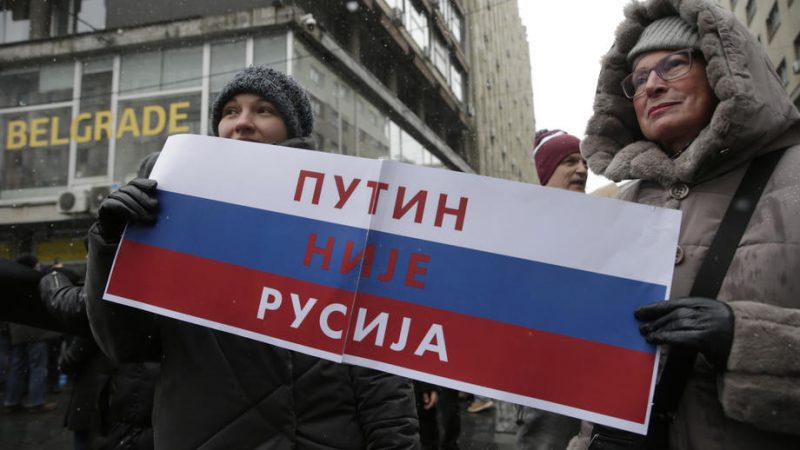 Anti-war protestors carry a placard that reads 'Putin is not Russia' during a rally against Russia's invasion of Ukraine, in Belgrade, Serbia, 6 March 2022. [EPA-EFE/ANDREJ CUKIC]

Since 24 February, when Russia invaded Ukraine, Serbia can no longer afford to maintain a policy of simultaneous closeness both with the West and Russia, writes Orhan Dragaš.

Attempts to interpret the Russian invasion of Ukraine, and especially the consequences of his war on the world, often begin and end with the comment that “nothing will ever be the same again”. It sounds trivial, but things are really dramatic and will have consequences in the long run, especially in the Balkans.

It is inconceivable that the Ukrainian crisis will end, in any way, with the return of Vladimir Putin to the international arena as an acceptable partner and equal interlocutor.

Maybe one day Russia will return to the international stage and its institutions, but its leader will not be Putin, but someone else. In both cases, it is a long period, years, maybe decades, a time way too long for any partner close to Russia.

As for the Balkans, this is especially true of Serbia, which is considered a close ally of Russia, a country that wants EU membership and is making progress on that path but is explicitly against NATO membership.

With its aggression against Ukraine, Russia opened a seemingly worst-case scenario to Serbia, forcing it to reconsider its long-standing policy of simultaneous closeness with the West and Moscow.

Belgrade has been successfully passing through these scissors for years, but since 24 February, they have been closing and forcing Serbia to find a new foreign policy strategy.

That strategy can be successful only if it is based on the assumption that “the day after Putin” has begun and that Russia should be excluded from the calculations on protecting state interests.

Serbia no longer has any reason to link its foreign policy and internal interests to Russia’s support. Support may still exist, but it will simply be invisible and without any influence at the international level. Therefore, it will be completely useless for Serbia and its interests.

The main point of the Serbian-Russian political alliance is protecting Serbia’s interests concerning Kosovo. As a permanent member of the Security Council and an influential member of other important international forums, Russia has had the power to block the intentions of Pristina, as well as Western countries, to include Kosovo in international institutions fully.

However, this power disappears with the Russian aggression on Ukraine since Moscow has become an isolated and rebellious state.

As its permanent member with the right of veto, Russia’s influence in the UN Security Council has so far been the most important common ground between Serbian and Russian policies of opposition to Kosovo’s independence.

However, it turned out that when it comes to extremely important decisions, decision-making in the Security Council can be overcome by delegating decisions to the UN General Assembly, as was the case with the condemnation of Russian aggression, which Serbia also joined.

This very convincing vote (141 to 5) showed that there is almost a consensus in the UN against Russian action thus, Russia becomes a player that must and can be bypassed overnight when it comes to important decisions.

Things are even more apparent when it comes to the Council of Europe, where Russia’s membership was first suspended, and a few days later, Russia announced that it was leaving the organisation.

This is happening at the moment of Pristina’s intensive campaign to become a member of the Council of Europe, which Serbia explicitly opposes.

Kosovo does not meet one of the conditions for membership in the Council of Europe- it is not a member of the UN, but it has the support of more than two-thirds of the members of this organisation to join it, which is another essential precondition for membership.

In this sense, Serbia’s opposition without Russia’s support has far less power.

Russia’s membership is being reconsidered in a number of important international organisations, such as the IMF and the OSCE, so Serbia may lose its key ally in these important forums as well.

This is especially true of organisations such as Interpol or UNESCO, in which Belgrade has long and successfully blocked Kosovo’s membership. In these organisations, the influence of Russia, under Putin, as a tightly isolated country, will be minor and therefore of little help for Serbia.

Russia’s conscious “withdrawal” from the Balkans to shift the focus completely to Ukraine has been very visible in the past few months. It was visible first, through very mild, almost non-existent resistance to the appointment of Christian Schmidt as High Representative in BiH, and then silence over the collapse of the pro-Russian government in Montenegro in early February.

The one-year term of this government was one of the most important Russian projects for destabilising the entire region, in which Moscow invested significant resources. Still, it accepted its demise without saying a word. Obviously, Moscow’s attention was focused mainly elsewhere.

Russia’s influence in Serbia is already physically dismantled. One of its “monuments”, the Serbian-Russian Humanitarian Center in Niš, completely lost its meaning and purpose overnight, if that was really its purpose, to be a hub for action in case of natural disasters in the region.

This centre is made meaningless by Russia’s complete political and security isolation and especially its physical cut-off from the rest of Europe, by the abolition of air traffic.

Serbia has reason to breathe a sigh of relief because for years the centre has been exposed to suspicions that this is not about any firefighting and rescue, but intelligence activities, led by Russia.

At the same time, there is a chance that the centre in Niš, with all its resources, will grow overnight into a regional hub for missions in natural or traffic disasters, whose beneficiaries could be Albania and North Macedonia, which are, with Serbia, the creators of the initiative for free economic zone, the Open Balkan.

What changes in the Balkan situation with the Ukrainian crisis is quite clear, especially for Serbia and its interests. When we add to the severe economic consequences that Russia will suffer due to international isolation, it is obvious that there is no reason to maintain a partnership of any kind with this country for years and decades, and absolutely no reason to count on its international support.