Sanctions are now necessary to avert crisis in Bosnia and Herzegovina

By Dietmar Köster and Tineke Strik 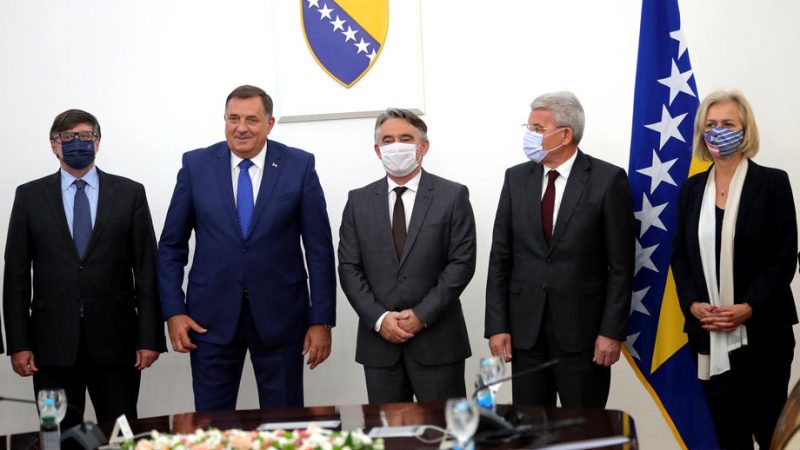 Dodik said "BiH is a protectorate of the USA, European countries, Japan and Canada, who joined together in an intention to impose their solutions on the peoples of BiH". [EPA-EFE / FEHIM DEMIR]

Tineke Strik is a Dutch Green MEP, Dietmar Köster is a Dutch Socialist and Democrat MEP

The failure of EU Foreign Affairs Ministers to agree on the imposition of sanctions against Bosnian Serb nationalist Milorad Dodik for violating the Dayton Peace Agreement and threatening the unity, territorial integrity and sovereignty of Bosnia and Herzegovina, demonstrated the lack of a sense of urgency to respond to this crisis that still prevails among some EU ministers.

During our visit to the country ten days ago, it became even more apparent to us how real this political crisis is. The BiH population is truly afraid of a new war, noticing the same worrying signs as in the 1990s.

The international community is underestimating the seriousness of the crisis, and is in fact contributing to a deepening of it by focussing their negotiations on self-proclaimed ethnic leaders, bypassing democratic institutions and processes, while grossly neglecting elected representatives, not to mention opposition politicians and civil society.

Ever since a boycott of state institutions in July, in response to the legitimate imposition of a law on genocide denial, Milorad Dodik has been taking serious and imminent steps towards the secession of the Republika Srpska, the Bosnian Serb entity of the country.

During the last month, he has called for an unconstitutional vote in the Bosnian Serb regional Parliament that would illegally withdraw the transfer of vital competences to the state level, and already took a first leap by the adoption of a vote on withdrawal from the federal medical agency.

He further announced the creation of his own army and has held provocative paramilitary exercises near Sarajevo.

As long as Dodik and his supporters do not feel the realistic threat of targeted sanctions or another form of serious international pushback, they will continue to escalate this crisis, which could eventually result in secession, thereby risking a violent conflict and jeopardizing the stability of the entire Western Balkans region.

The fact that right after the meeting of EU Foreign Affairs ministers, Dodik issued a statement reaffirming that he would continue with the votes on the withdrawal of competences to the state level, clearly shows that he feels strengthened by the Council’s inaction.

Yet the Council and the Commission seem to think that an autocratic ethno-nationalist such as Dodik will listen to the voice of reason, and want to negotiate their way out of this crisis; deescalating the situation instead of actually solving it.

Negotiating with Dodik sends the wrong signal and would further exacerbate the current tensions as well as hamper any positive development or progress of the country towards European integration. It would mean that the EU is willing to make concessions on its own values and principles as well as on the agreement preserving peace in BiH.

Not only will giving in to Dodik’s alleged demands – a transfer of land ownership from state to entity level – factually help him to get a step closer to achieving his secessionist agenda, but it will set a worrying precedent for the future.

Whenever Mr Dodik or a different autocrat in the region wishes to pursue a certain goal, they will know exactly what is the most effective strategy: purposely escalate a crisis and wait for the EU negotiators to fly in to ask what your demands are.

Tough and targeted sanctions are the appropriate response to these dangerous actions, which threaten the integrity and peace in an EU neighbouring country and aspiring candidate that has already suffered the horrendous consequences of the indecisiveness of the international community once in the past.

The fact that Dodik lobbied his authoritarian friends, Slovenian PM Janez Jansa and Hungarian PM Viktor Orban in the week ahead of the Foreign Affairs Council, shows that he does fear a united and strong EU response.

Financial sanctions would hurt him and his entourage because of their numerous assets in EU member states and could have the potential to invoke a change of course.

The political crisis in BiH cannot be overcome just by the imposition of sanctions. A renewed interest and an agenda focused on social cohesion by the international community are vital.

Empowering NGOs and citizens’ movement and building their capacities should be our priority, so as to ensure their meaningful involvement in democratic life, dialogues and the EU enlargement process.

Bosnia and Herzegovina’s citizens, deserve what was agreed on 26 years ago: peace, democracy, stability and to have a voice in their country’s (European) future.