Serbia elects amid crisis of democracy 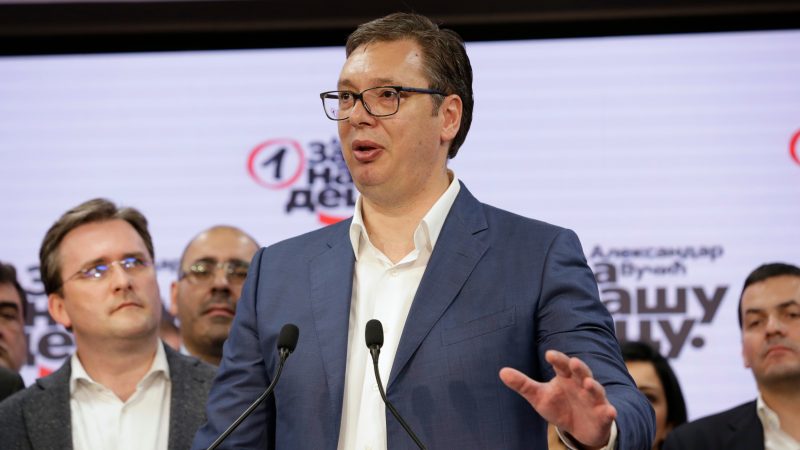 Answering reporters’ questions, Vučić said “many find it easiest” to take their anger out on Serbia, which is why Serbia’s position is “more delicate.” [EPA-EFE/ANDREJ CUKIC]

Two years later, the officially stated reasons for the extraordinary elections in Serbia are proving that the parties that boycotted the 2020 election were right, writes Aleksandra Tomanić.

Aleksandra Tomanić is the executive director of the European Fund for the Balkans.

On 3 April, Serbia will hold presidential and several regular municipal council and local elections. That day, Serbia will also have early parliamentary elections.

Snap elections are not seldom events in the history of post-socialism parliamentarism in Serbia. In the past 30 years, there have been more elections outside the schedule than regular ones.

This is a clear indicator of the problems which the country has with the functioning of political institutions and the consolidation of democracy. However, this time there are two worrisome aspects – first, these elections follow a prolonged crises of democracy and second, the early ballot was announced even before the current government took office.

President Aleksandar Vučić announced that there will be new general elections in the autumn of 2020. He did this after a party presidency meeting in his capacity as president of the ruling party, the Serbian Progressive Part

y (SNS), which is holding an overwhelming coalition majority in parliament (243 of 250 seats). However, Article 115 of the Serbian constitution does not foresee any side jobs for the president of the country. The double-hatted president even put the upcoming government into some sort of traineeship, granting them 18 months to “prove their capability”.

This is an openly new level of keeping people in acting positions, already applied throughout the administration, were according to the latest EC country report for Serbia 62% of filled senior positions were held on an acting basis.

In late 2018, when even the EC observed “clear elements of state capture” across the region, the crisis of democracy in Serbia got worse and received international recognition through the initiation of an inter-party dialogue led by the European Parliament.

As there were no observable improvements and massive irregularities were expected, most opposition parties decided to boycott the June 2020 elections.

But the hopes of the boycotting parties to show the real challenges of democracy in Serbia did not fulfil. The international community congratulated the winner, continued business as usual and even disagreed openly with the boycott. The potential illegitimacy of the parliament and the government was not questioned at any time.

But two years later, the officially stated reasons for extraordinary elections are proving boycotting parties right. A new set of election laws, campaign financing and anti-corruption have passed the Parliament at the beginning of February, technically laying the ground for calling snap elections on request of the government.

This time the whole opposition will take part in the elections, despite remaining deficiencies. The continued distrust into a regular election day is visible in the enormous effort opposition parties are putting into preparing their own election controllers.

Worryingly, snap elections were just taken for granted after their announcement in late 2020, there was no public debate nor a session in Parliament that would discuss this important decision.

Furthermore, the official government proposal to the President explaining the need of snap elections is not even publicly available but shared on request with some journalists and IOs.

Apart from arguing that now conditions are met that all political actors can participate in the elections, it is interesting that the government expectation from these elections also covers the ´decrease of created tensions between confronted options in society, rejection of exclusiveness and hate speech and affirmation of the right to freely express opinions and views on certain political, economic and other issues.´

The government does not seem to see its own responsibility for these rightly observed tensions in society. Especially having in mind that hate speech is widespread against political opponents, civil society representatives and journalist in Parliament, and that smear campaigns are run by government-controlled media and tabloids.

Attacks in public space on activists and political opponents are common across the country. The most shocking example is the attack on protesting citizens last year in the city of Sabac, where hooligans were driven in with sticks and hammers in official cars.

The question now is: if even the government admits that there were all these immense shortcomings that are now improved to an extent legitimising snap elections, what happens with all decisions taken by a government and parliament that took office under previous conditions? How legitimate are they?

Meanwhile, media freedom is shrinking further. Freedom house lists Serbia unchanged as a “partly free” country and notes it has one of the major downturns in democracy scores in the last 10 years globally.

The current monthly inflation rate is above 8%, the highest since 2014, government debt has almost doubled over the past decade, trade balance deficit is growing, military spending increased sharply in 2019, while budget allocations for health, education and social protection have dropped.

Corruption, money laundering and organised crime affairs are part of the regular political content. Regional stability is fragile and might even get worse, as Serbia is the only country in the region (and apart from Belarus in Europe) that did not condemn the Russian invasion to Ukraine.

The pandemic is still causing dozens of deaths a day, although real numbers are proven to be multiple times higher. Serbia had access to vaccines as one of the first countries, but vaccination rates still have not reached 50%, telling a lot about trust in institutions. Interestingly, that is close to the average voter turnout, mostly just above 50%.

An average Serbian voter has no access to these and many other information and gets a different, rosy picture through controlled mainstream media.

These days the forgotten soft power of enlargement the EU rightly was so proud of, get a sad and terrible reminder.

Democratic values matter. Their importance can only be downplayed by someone who has direct advantages of not having them or by somebody who never experienced life without them. Trading them for other expected favours is short-sighted and very damaging.

In previous years, the EC helped itself adding “sufficiently” to the fulfilment of political criteria in their reports. If these elections were to be free, fair and with an informed electorate, the Serbian voters could say if sufficiently is enough for them too.