The Berlin Wall is yet to fall for Skopje 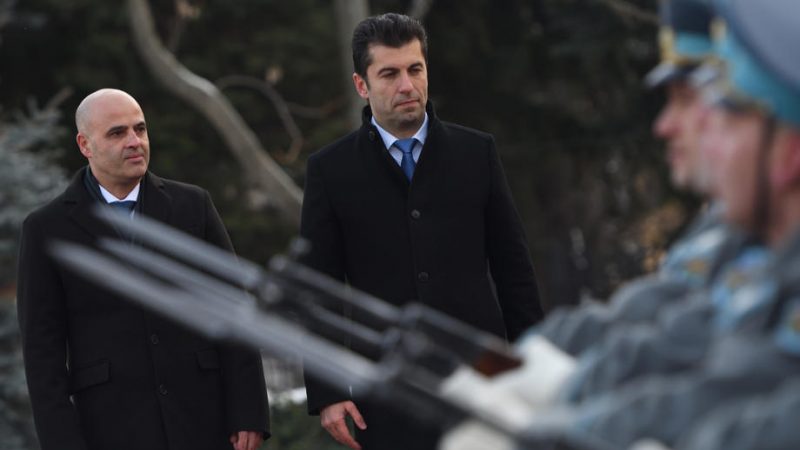 Until days ago, Bulgaria’s two most powerful men, President Rumen Radev and Prime Minister Kiril Petkov were like-minded politicians, which was good news for the country. Their first clash, over North Macedonia, is less good news, writes Emilia Milcheva.

President Rumen Radev’s public rebuke of Prime Minister Kiril Petkov for his activism and enthusiasm in resetting relations with North Macedonia has shown that the issue of Bulgaria’s veto of Skopje’s European path is reaching dangerous proportions.

“I think that the visit of the Prime Minister (in Skopje) was premature… Any hasty action of the Bulgarian government and any preliminary positive signal can be misinterpreted as some sort of concessions from the Bulgarian side,” the head of state told reporters.

“Not only it was it not premature, but it was terribly late”, Petkov retorted the same day. He added: “It’s the Bulgarian side who is late to have a position, to have clear goals and an active approach… I think that the approach should be changed.”

Petkov is trying to change the approach in an attempt to make up for the lost time, in his words, 30 years wasted. He went to Skopje immediately after the swearing-in of the new Macedonian cabinet. A few days later, the visit was returned in the form of a joint meeting of the two governments in Sofia.

After two years without an ambassador to Bulgaria, Skopje nominated Agnesa Rusi, a career diplomat and head of North Macedonia’s mission to the EU. To this activity are added the intentions to establish direct flights between the two capitals with the first flight in March, the completion of the railway connection, Sofia and Skopje being the only capitals in Europe without such connection, the resuscitation of corridor N8 connecting the Black Sea with the Adriatic (Bourgas-Vlora), and the possible reduction at roaming prices.

At the same time, Sofia will try to intensify the dialogue with EU countries that do not understand its veto on North Macedonia.

According to Assoc. Prof. Ivo Indjov, an expert in political communications, Petkov is right that by intensifying economic cooperation, a de-conflicting atmosphere can be created. But Indjov recognises that Petkov underestimated that the anti-Bulgarian circles in the neighbouring country would show their ugly face (he referred to Nort Macedonia’s President Stevo Pendarovski’s provocative meeting with representatives of the organisation ‘OMO Ilinden’ declared unconstitutional in Bulgaria).

Bulgaria asks North Macedonia to change its constitution to include Bulgarians in its preamble, along with Serbs, Vlachs, Roma, Turks, Bosnians, which are already included. However, the new Prime Minister Kovachevski and his party SDSM cannot achieve such constitutional change. SDSM has 64 MPs in the 120-seat parliament, and the support of the opposition VMRO-DPMNE will be needed.

North Macedonia could also be a litmus test for the stability of the Bulgarian leadership. The relations between the president and the PM would be put to the test, the first gaining internally with the position of intransigence, while the liabilities remain with the prime minister. Petkov had to explain that he was not shown a yellow card, but the controversy simply illustrated the separation of powers. However, there is already speculation that the public criticism is only the tip of the iceberg of other unspoken disapproval of some government policies.

After the president’s reprimand, the main opposition party, Boyko Borissov’s GERB, was quick to announce the imminent end of the cabinet, while Democratic Bulgaria (DB), which is a junior partner in the government, backed the prime minister’s efforts to boost relations with North Macedonia.

However, Petkov’s efforts may receive unexpected support from the mostly ethnic Turkish Movement of Rights and Freedom (DPS). The movement’s position has always favoured the EU integration of the Western Balkans, with a focus on Turkey. In Brussels on Thursday, MEP Ilhan Kyuchyuk (ALDE/DPS), rapporteur for North Macedonia in the European Parliament, met with Macedonian Prime Minister Kovachevski, and according to a press release from his office, called for more pragmatism.

“Bulgaria cannot afford to block its western neighbour for a very long time because this will generate a new wave of anti-Bulgarianism in Macedonian society. Instead of being a leader in the European integration of our brotherly country, we have no interest in surrounding them with a new Berlin Wall”, said Prof. Indjov.

The historian Assoc. Prof. Stefan Dechev believes that foreign policy should be conducted by the government. He agrees with the Prime Minister that Bulgaria is late with its active approach toward North Macedonia. “The only problem I see is that the government is not using the media in the best way to explain its policy,” he told EURACTIV.

In the absence of policy, the media relay tough rhetoric – for example, the Bulgarian Foreign Ministry, after the meeting of Pendarovski with representatives of OMO linden. In Bulgaria, this organisation was registered as a party in 1999, but the registration was revoked a year later. Radev called them people who profess “separatist attitudes and claims to a minority” – it is for these reasons that the organisation was declared unconstitutional. However, the European Court of Human Rights (ECtHR) does not see a threat to Bulgaria’s national security in OMO Ilinden and insisted that it be registered, recalling a basic EU value – the right to free self-determination. Bulgaria has consistently ignored ECtHR decisions on this topic, and the organisation is still considered as a risk to territorial integrity.

Unlike the president, the prime minister has ignored the topic of ‘OMO Ilinden’. His emancipation from Radev, his former mentor, goes through a big test: the fall of the Berlin Wall for Skopje. If he is succeeds, this will not bring him glory – it will be already a success if he is not declared a “national traitor”.