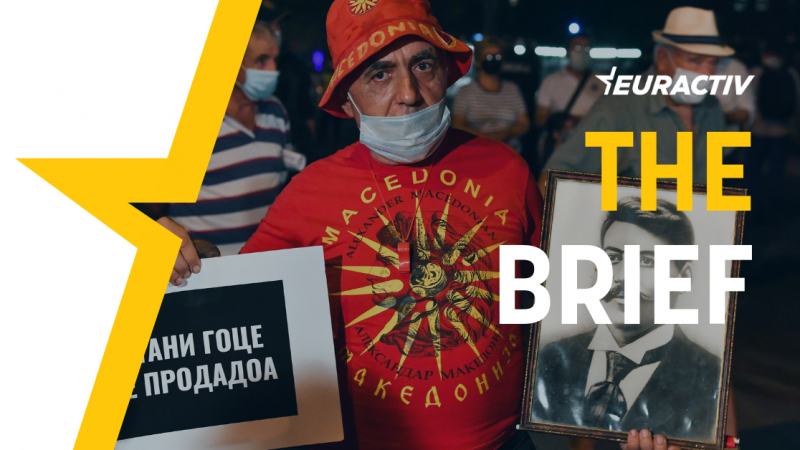 In Skopje, there is hope that the elections in neighbouring Bulgaria will unlock the country’s veto on the start of North Macedonia’s EU accession negotiations before the end of the year. This Brief is an educated guess at whether such a scenario – which would be incredibly beneficial to the volatile Western Balkans – could materialise.

Bulgarians voted on 14 November for a new parliament and president. In the presidential run-off on 21 November, they re-elected Rumen Radev as the head of state.

Parliament is already constituted but talks to form a government continue. If everything goes well, Bulgaria will have a coalition government cobbled together from four political parties.

These are ‘Change continues’, a new centrist party close to Radev, the Bulgarian Socialist Party (BSP), centre-right ‘Democratic Bulgaria, and Slavi Trifonov’s anti-establishment ‘There is such a people’.

In North Macedonia, the Bulgarian elections are followed with great interest. The Bulgarian veto became official under the government of Boyko Borissov, in which nationalist VMRO was a junior coalition partner. Now VMRO is not only excluded from power, but it didn’t cross the 4% barrier to enter parliament (they won a meagre 1.07%).

Moreover, the leading party in the new cabinet, ‘Change continues’, appears to be a modern formation built around two Harvard-trained businessmen, whose main ideology seems to be pragmatism.

In addition, there is foreign pressure on Bulgaria to lift its veto, from the United States and EU countries.

According to pundits, France, which will take over the rotating presidency of the Council of the EU from 1 January, wants this issue solved by 31 December at the latest. In other words, before its presidency. The right place and time should be the EU summit on 16-17 December.

There is a strong hypothesis that a government in Sofia would be formed by then and that Kiril Petkov would make his EU summit debut as prime minister. If no government is formed by then, President Radev will represent the country at the summit.

But this doesn’t mean that Bulgaria will lift its veto.

What sometimes escapes people in Brussels is that there is a very strong consensus in Bulgaria concerning North Macedonia, across the spectrum and beyond party lines.

Let’s imagine that ‘Change continues’ would indeed like to lift the veto for pragmatic reasons (unlikely at this stage). That would be suicidal: Its coalition partners would cry foul, and the government would collapse.

Therefore, it is highly unlikely that the veto would be lifted before Skopje drastically changes its attitude towards Bulgaria.

This includes ending repressions against Macedonians with Bulgarian citizenship,  negative narratives against Bulgaria in textbooks and public speech, and the destruction of Bulgarian monuments or making them over as Macedonian.

Thus far, the authorities in Skopje (in their own complicated election phase) have shown no genuine desire to fix the problems. It doesn’t matter if Zoran Zaev’s SDSM or the nationalist VMRO-DPMNE is in power because both bank on foreign pressure on Bulgaria instead of responding to Sofia’s concerns.

But this pressure is driven by slightly hypocritical reasons. France indeed wants the issue solved now, but the French motivation is simply that they don’t want to burden their EU presidency with an issue that could be used for attacks against Emmanuel Macron at home in the April-May presidential election.

Let’s not forget that France is not hot about further EU enlargement and that Macron was behind the previous vote to keep North Macedonia on hold. In theory, if everything goes well and if Skopje plays ball, Bulgaria could lift its veto under the French presidency. But France doesn’t want to be associated with such a “success”…

When the Commission doesn’t know how to solve a problem, it usually proposes a toolbox. But this time, it has not even gone that far.

The EU executive could act as a guarantor that Skopje would profess good neighbourly relations with Bulgaria as part of the negotiation process.  But no, it prefers to wait for an unlikely shift in the Bulgarian position after the elections.

Our take is that the problem is not unsolvable, but the current tactics from Skopje and Brussels is just unproductive.

ENTSO-E will present its Vision for a climate-neutral energy system by 2050, and discuss challenges and opportunities of offshore development, energy system integration and unlocking demand-side flexibility. Learn More and Register Here >>

Carbon farming practices could help Polish farmers cope with permanent drought as they could increase the productivity of their yields, an expert tells EURACTIV Poland. But he says that at the moment, Poland has “no instruments that would support carbon farming in a broader way.”

With a budget of €95.5 billion for 2021-2027, Horizon Europe is the largest multiannual budget for an EU research programme. Food, bioeconomy, natural resources, agriculture and environment are among the priority areas earmarked for the new programme.

Along with athletic professionals, the fans behind football teams have a large impact on sustainability in sports. FRF (Romanian Football Federation) and EURACTIV Romania interviewed a number of Romanian football fans to bring to light their own understanding of the issue and what it means to them.

Shortly after Rumen Radev’s victory was confirmed in Bulgaria’s presidential election run-off, the United States voiced its “deep concern” over Radev’s comment in a televised debate last week that “Crimea is Russian for the time being.” The US embassy in Sofia issued a statement saying that “despite Russia’s attempted annexation and ongoing occupation, Crimea is Ukraine.”

Experts say that Europe’s Roma communities will be at increased risk unless European countries speed up vaccination and design targeted support as the fourth COVID-19 wave and new lockdowns take hold across the continent. Roma faced increased institutional racism and discrimination during the first months of the pandemic, and the director of the Open Society Roma Initiatives Office says he wouldn’t be surprised if it happened again.

And as the European Commission is looking to come up with new laws next year to boost the prominence and independence of the bloc’s equality bodies and strengthen victims’ rights as part of EU treaties, it is time to take stock of the long-standing issues of racism and discrimination in Europe. Check out EURACTIV’s special report on anti-discrimination for more.

Female breast cancer is the most commonly diagnosed form of the disease and there is an urgent need to improve breast cancer patients’ quality of life as available treatments have increased their lifespan, health experts said during a EURACTIV event.

One response to “The Brief, powered by ENTSO-E — Bulgarian elections, Macedonia veto”