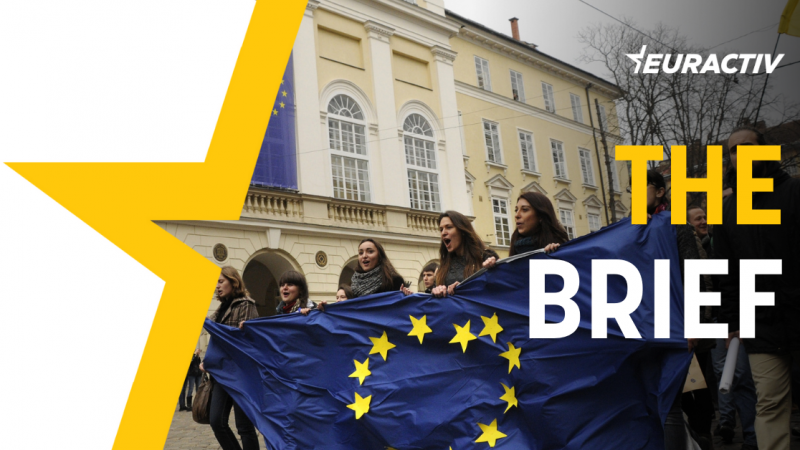 The war in Ukraine is urging us to rethink many EU policies. One of them is EU enlargement.

Ukraine, a European nation heroically defending itself against the Russian aggressor and also defending European values, has asked for a fast-track EU membership.

Brussels has broken the taboo by taking on board its membership bid and launching in record time the “avis” procedure, the drafting of an opinion on Ukraine’s suitability.

This is a giant step. Let us not forget that the former Soviet republics of Ukraine, Georgia, Moldova, Belarus, Armenia and Azerbaijan were wrapped up in the  Eastern Partnership, which provided association for those who wished but not membership.

(Ukraine, Georgia and Moldova took the “association” offer but asked for more. In Western Europe, few realised how powerful a symbol was the EU flag unfurled during the Maidan revolution in Ukraine in February 2014.)

Many in Brussels and elsewhere in Europe are now wondering: Fast-tracking heroic Ukraine is OK, but what are we doing with the Western Balkans countries, which have been waiting for two decades?

That’s a legitimate question. Let’s take a look at an example from recent history.

Bulgaria and Romania were promised EU membership largely because of another war.

In 1999, both countries gave their airspace for the NATO war against the Serbian strongman Slobodan Milošević, also known as the Kosovo war. The UK’s prime minister at the time, Tony Blair, said Sofia and Bucharest would get their reward in the form of EU membership under his watch.

(Blair also had a hidden agenda; he wanted to dilute the EU into a loose union of heterogeneous members. Nevertheless, his overture was a great move.)

Were Bulgaria and Romania ready for EU membership when they joined in 2007?

No, they were not. As proof, 15 years later, neither Sofia nor Bucharest have managed to get rid of the EU monitoring of their justice system, called the “Cooperation and Verification Mechanism”.

But can the fast-tracking of Bulgaria and Romania be considered a mistake?

Of course not. If this had not happened, Bulgaria would have been Vladimir Putin’s Transdanubian province. For him, the Black Sea is too important; he would probably even set foot there before hitting Ukraine.

EU enlargement is, first and foremost, a geopolitical process.

But why has the EU turned enlargement into a bureaucratic process, fulfilling conditions and preconditions for decades, while the candidate countries, and the people in them, get fed up?

The answer seems clearer today as Putin expands his empire in a desperate attempt to rebuild the Soviet Union by sending tanks to re-conquer lost territories. Assuming that the EU is also an empire, why does it refuse to expand, even though countries on its periphery are still eager to join?

Is the EU doing a favour to Putin by dragging its feet on enlargement? Isn’t this a wrong policy, a by-product of Angela Merkel’s dominant presence in EU affairs, which should be abandoned?

And what happens in between? For Putin’s Russia, no event that we may consider decisive is the last episode. For Putin’s Russia, the admission of a country that had been part of the Soviet empire into the EU or NATO is never the end of the story. He always plans a revanche.

I will give an example related to the country I know best.

What happened in Bulgaria during the 12 years of Boyko Borissov’s rule? Today, we can safely say that Borissov was simply maintaining a very comfortable status quo for Putin. No reform was made, and the army was totally unable to fight.

Borissov even ‘improved’ the status quo by giving Putin a gas pipeline that greatly increased Russia’s influence in the Western Balkans, especially in Serbia (the so-called Balkan Stream, a continuation of TurkStream).

Borissov pretended to be pro-Western, but he is seen by many today as the godfather of a mafia model that turned Bulgaria into a rotten fruit, which is very convenient for Putin’s Russia.

In Serbia, the situation is much more worrying because the autocrat there, Aleksandar Vučić, who also pretends to be an unavoidable factor in the West, is pursuing an openly pro-Russian policy, and the Serbian media he controls are anti-European.

Serbia’s influence in the Western Balkans remains important, especially in North Macedonia, where anti-Bulgarian policies from the era of Tito’s Yugoslavia have been the work of Serbia’s secret service.

Vučić is building geopolitical projects such as the Open Balkan. And what is Bulgaria doing? Apart from the fact that it remains entangled in attempts to unravel its difficult relations with Skopje, nothing.

Other geopolitical players are not asleep either. Like Turkey, which also suffers from imperial, Ottoman nostalgia and tries to set foot wherever possible, especially in the most fragile country in the Balkans, Bosnia and Herzegovina, which is on the verge of collapse.

At a conference EURACTIV Bulgaria organised in Sofia on Monday, MEP Radan Kanev (EPP) called for Bulgaria and Greece to start playing the geopolitical role expected of them and successfully steer the Western Balkans accession to the EU.

EU enlargement should make our Union stronger. To succeed, the applicant countries may be weak as economies (they will catch up), but they should get rid of Putin’s fifth column. Putin’s local stooges feed on corruption, and corruption in the Balkans is killing the EU perspective.

They should also get rid of the antagonisms of the past that only play into the hands of the Kremlin. They should get rid of their local autocrats. Support for EU enlargement should be completely redesigned to favour civil society.

We should be able to respond to the call of history in a very short time. And let’s thank Ukraine for opening our eyes.

** The Brief will take a short break and be back with you on Tuesday, 19 April.

French far-right presidential candidate Marine Le Pen has softened her stance on France’s possible exit from the EU but her programme for the country, if elected, suggests otherwise.

France’s EDF Group has launched a hydrogen plan to develop three gigawatts of electrolytic hydrogen worldwide in an effort to further diversify its activities, the group said on Wednesday (13 April).

The world’s major international finance and food organisations have joined forces to call for urgent, coordinated action on food security in light of the war in Ukraine, warning soaring food prices could fuel social tensions and push millions into poverty.

Members of the World Health Organisation (WHO) have called for concrete action to reduce premature deaths from noncommunicable diseases (NCDs) such as diabetes, cancers, and heart and lung disease, calling their prevalence a “pandemic”.

A broad international platform of activists, unions and experts has urged India and South Africa to reject the leaked compromise on intellectual property rights on COVID-19 vaccines, which the European Commission considers the ‘most promising path’ to resolve the issue.

After facing discrimination and being denied humanitarian aid in Hungary, many Roma refugees fleeing Ukraine head back to their war-torn country to reunite with their families, despite the risks, activists say.

The UK unveiled on Thursday (14 April) an agreement with Rwanda that will see them send thousands of asylum seekers to the East African country to have their applications processed, but the controversial deal is likely to spark legal challenges.

The European Commission has decided to restrict the pesticide ‘sulfoxaflor’ to indoor-only use after concerns over its impact on bees, but the move has not gone down well with the US.

As fossil fuels continue to be burned to produce heat, Europe’s air quality suffers. With many of these fossil fuels coming from Russia, EU policymakers are seeing an opportunity to speed up their phase-out.