The end of the Serbia-Belarus tango 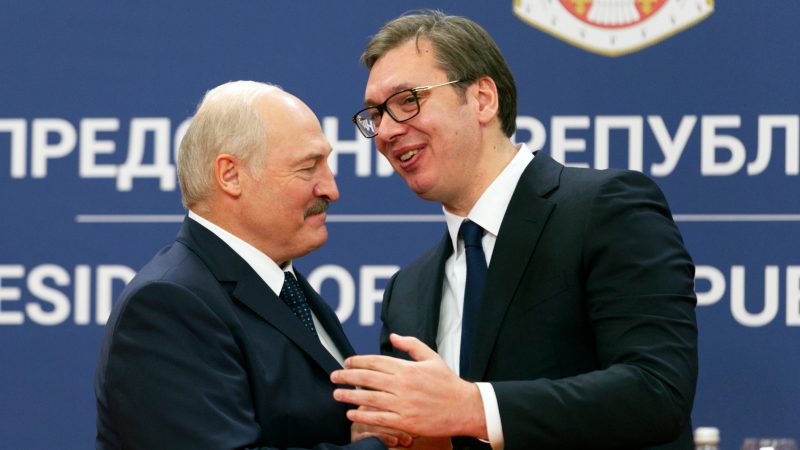 Serbia has for many years claimed to maintain friendly and even brotherly relations with Belarus, but this did not prevent Belgrade from joining the EU sanctions against the regime of Aleksander Lukashenko, writes Orhan Dragaš.

Dr Orhan Dragaš from the International Security Institute of Belgrade is the author of the book “Two Faces of Globalization- truth and deceptions”.

Commemorations are held in Serbia every 12 April, on the day when a civilian passenger train was hit by NATO missiles on the bridge at the Grdelica gorge in 1999, one of the biggest individual tragedies of the three-month bombing of Serbia.

However, few remember that on that same 12 April 1999, Serbia and Montenegro, then united in FR Yugoslavia, decided to join the Union of Russia and Belarus.

By the decision of the Federal Assembly, and with the signatures of the presidents of the then two parliamentary houses, Srđa Božović and Milomir Minić, Serbia and Montenegro stated that they join the Union of Russia and Belarus and accept the goals of that union and the obligations arising from membership.

This decision never came to life, nor was it ever ratified by the partners. It remained in the vague memory as a bluff by Slobodan Milošević to try to drag someone else to his losing side in the middle of the bombing. They never took the bait in Moscow or Minsk, or, more precisely, only in Moscow, because Moscow decides also for Minsk.

From 1999 until today, Serbia and Belarus have come a long way. Relations between the two countries are constantly accompanied by statements of fraternal ties, closeness in every respect, and constant calls for boosting economic cooperation. But does reality really fit these worn-out, protocol clichés?

Belarus is one of the few countries in the world, and certainly the only one in Europe, against which Serbia is actively implementing some kind of interstate sanctions. It did so recently, when, together with other countries in the Western Balkans, it joined the EU sanctions against Belarus regarding air traffic.

As of 21 June, Serbia, like all other European countries, does not allow Belarusian civilian planes to land at its airports, and domestic carriers will bypass the airspace of Belarus.

The first sanctions were adopted in August last year, when Serbia joined the EU Declaration condemning the regime in Minsk because it did not conduct the presidential elections in a free and fair manner.

Shortly afterwards, when mass demonstrations raged across Belarus over Lukashenko’s election theft, Serbia cancelled its participation in a joint military exercise with Russia and Belarus, scheduled for September in Brest, Belarus.

All the while, Serbia kept a “low profile” regarding its sanctions on Belarus. Participation in the Slavic Brotherhood military exercise was cancelled by the Ministry of Defence, saying that the cancellation of joint exercises refers to “all partners”.

And we learned about Serbia’s joining the EU’s moves towards Minsk both times from Brussels, not from Belgrade.

If a cost-benefit analysis of the Belarus relations was made anywhere in Belgrade, it would show that the benefits of taking distance from Minsk are incomparably greater than the other option.

The treatment of Belarus as a friend, partner, and even “brother” did not have much economic substance.

Serbia trades with Belarus in a year (in both directions) as much as it exported to Bosnia and Herzegovina in one month before the pandemic. And the donation of four MiG-29s by Belarus would certainly not have happened without Russia’s involvement.

On the other hand, maintaining the narrative of closeness with Belarus, the only European state that is not a member of the Council of Europe, has become unsustainable with the intensification of internal repression by Lukashenko in the last year.

Joining the European condemnation for election fraud and repression of the opposition was a step necessary for Serbia as a candidate for EU membership, and the same goes for cancelling participation in a joint military exercise.

The introduction of sanctions in air traffic was an even easier move because this is about opposing organised state-sponsored air piracy, unimaginable on European soil.

For Serbia’s foreign policy position, these were ideal situations to improve its not-so-good statistics when it comes to harmonization with EU foreign policy, bearing in mind that Belgrade refuses to join the Eu sanctions against Moscow.

And Serbia took advantage of that, moreover, knowing that there would be no downside. Significantly, the Serbian sanctions on Minsk do not harm the relations between Serbia and Russia.

In the meantime, the European Union is piling up additional sanctions against the Lukashenko regime, and at the same time dangling a package worth three billion euros, ready to be pumped into the Belarusian economy in Minsk immediately after the change of government.

Serbia will follow the EU in further restrictive moves towards the government in Minsk, but that will not set a precedent because it has participated in many of them so far, without suffering any damage.

A step further would be for Belgrade to directly inform its public on some next occasion that it is participating in the European policy towards Belarus, without waiting for the news about it to come from Brussels officials.