By A group of authors 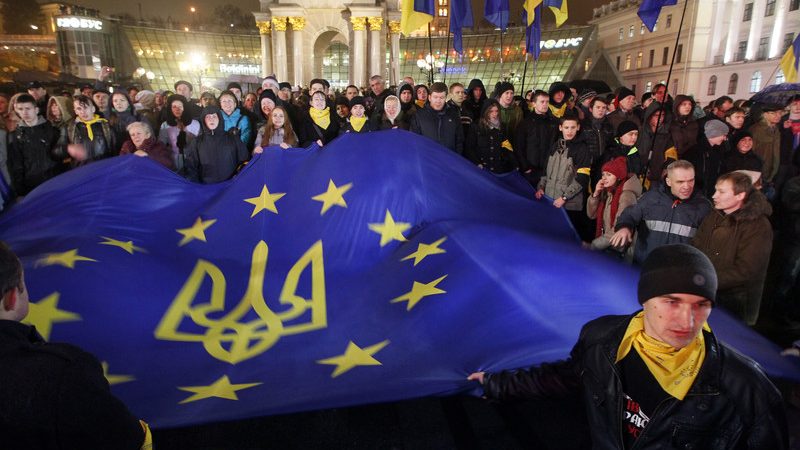 File photo. A file picture made available 22 November 2014 shows Ukrainians waving an EU flag during a protest on Maidan Square, or Independence Square, in downtown Kiev, Ukraine, 22 November 2013. Euromaidan, or Maidan movement, was a wave of protests that escalated into deadly civil unrest in Kyiv, Ukraine. [EPA/EFE/SERGEY DOLZHENKO]

The authors are co-founders of the Ukrainian National Platform for Resilience and Social Cohesion.

The European Council will decide on Ukraine’s application to accede to the EU at the 23-24 June summit. The decision will determine whether Ukraine will be able to embark on the path toward full EU membership through the candidacy status process and will draw trajectories for the region’s political development for the years to come.

Ukraine applied for EU membership on 28 February, four days after Russian Federation began its brutal invasion. Despite the seemingly rapid decision to submit the membership application, the decision was not made on a whim.

The decision was a continuum of Ukraine’s steps toward EU membership for the past decades. It is the choice Ukrainians are defending today as fighting for their sovereignty against Russia.

The ongoing invasion is a manifestation of the Russian leadership’s attempts to radically redefine Europe. If the EU and European community wish to protect their values and citizens whilst demonstrating leadership to the world, decisive action to walk the talk is needed.

This is what is at stake at the EU summit. A decision in support of Ukraine’s accession to the EU is in support of a strengthened Brussels and a strengthened Kyiv. As member states prepare for the summit, four factors underscoring the assets Ukraine brings to the European community should be brought to the attention of decision-makers.

Russia’s full-fledged invasion and open military aggression caught Europe off guard. The chain of events that have since followed has revealed the price of the decisions made across European countries prioritising economic development over security preparedness.

The cumulative effects of these decisions have been seen along national borders and in the hasty steps, nations have now taken to fill the gaps accumulated during the past years.

Faced with an existential threat, Ukraine’s armed forces have demonstrated their ability to master new defence systems and successfully use them on the battlefield. In addition to the skills the Ukrainian troops have shown, the army continues accumulating invaluable experiences as it maintains its counteroffensives across frontlines.

Europe has not seen fighting with such intensity since the Second World War. The steps Europe now takes to support Ukraine are steps it takes to secure itself in the future.

Ukraine’s resilience and ability to deter the Russian invasion have been enabled by the steps taken in the past in developing a sustainable democracy, coupled with the commitment of the Ukrainian society to defend the progress it has made.

Thanks to volunteers and community networks fostered before the war, aid was able to reach the front lines in days, and displaced people received shelter across the country.

The resistance and ability to organise Ukraine were demonstrated during the first days and weeks of the conflict and continue to maintain the power of horizontal networks.

As part of the EU, Ukraine will be able to share the learnings it has accumulated in fostering strong social cohesion and networked communities, providing the EU with means and methods to counter hybrid threats and direct acts of aggression – be they in border zones or cyberspace.

The devastating consequences of the blockades imposed on Ukraine’s Black Sea ports brought Ukraine’s foundational role in the European and global economy to the forefront.

The interlinked effects of the war have manifested in food shortages across regions. Amidst rising food prices, questions regarding preparedness and self-sufficiency go beyond staples and agricultural products.

As it stands, Ukraine is a global breadbasket and a significant producer of rare earth metals and raw materials used in energy technology, electric vehicles, and the space industry. These will become the EU’s resources benefitting the entire market area if part of the EU.

In 2021 Ukraine ranked 49 out of the 130 economies assessed by the Global Innovation Index and made it to the top three of the most innovative countries with below-average income. Ukraine has defended its position in the innovation ranking amidst the months of conflict.

Already before the beginning of the war, the government launched the Diia online portal (www.diia.gov.ua), bringing all state services under one website. The portal has now been used to, for example, register internally displaced people allowing individuals fleeing from the war to apply for assistance wherever they are.

Toward a strengthened Europe and Ukraine

The four examples are far from an exhaustive list of the strengths the European community will gain through a favourable decision regarding Ukraine’s accession at the EU June summit.

A positive decision will strengthen resilience, unity, and social cohesion in Ukraine and provide the EU with an opportunity to demonstrate political leadership within and beyond its borders. A positive vote for Ukraine is a signal of support to all countries currently on the path of democratic development.

Despite the clear opportunity, internal divisions within Europe and the insecurities regarding Ukraine’s membership need to be recognised. However, contemporary national divisions should not stand in the way of long-term goals. Closing the door for Ukraine risks manifesting in a strategic mistake with consequences ricocheting across the continent for decades.

History is made in increments. The decision reached on 23-24 June represents an opportunity to take a leap toward a united and secure Europe. The decision will hopefully recognise Ukraine’s fight as the European fight for democracy and humanity – a fight our country will also continue as part of the European Union.