Protestors in front of the European Commission. [James Crisp]

Thousands of European steelmakers descended on the EU capital Brussels on Monday  (15 February) demanding that officials do more to stop the flood of cheap imports from China.

“Say ‘no’ to MES for China,” said a banner carried by steelworkers dressed in hardhats and fluorescent uniforms, referring to the market economy status long denied Beijing.

China joined the World Trade Organization in 2001 as a developing country economy run largely by the state but was promised a review within 15 years to win a change in status to put it on a par with its major trading partners.

Without the market economy status, the WTO’s 162 member countries are much freer to slap anti-dumping measures on cheap Chinese products.

The Unites States and Canada are determined to continue denying China the designation, but fears are that Europe may forge ahead in an effort to avoid angering Chinese authorities.

Though declining for years, the European steel sector counts for 11% of the world’s total output and employs about one million people in some of Europe’s most economically fragile regions.

“If surrendered, China MES could cost the EU millions of jobs and hundreds of billions of euros in lost growth,” said a statement by AEGIS, a lobby grouping several industries that would be affected by the change in status.

“We are calling on EU leaders to deny Market Economy Status to China, as it simply is not yet a market economy,” it added. 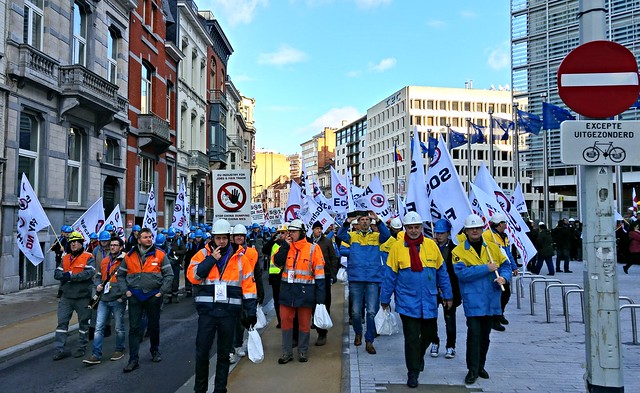 The European Commission, which handles trade matters for the EU’s 28 member states, has until the end of the year to make a decision.

At a news briefing, Commission spokesman Daniel Rosario insisted that the decision would be strictly based on technical grounds.

“We are not engaging in a broader philosophical discussion on whether China is a market economy or not,” he said.

“This is a specific discussion in the very specific and strict framework of the anti-dumping legislation of the EU,” he said.

UKIP leader Nigel Farage went to the march. British steelworkers have recently lost their jobs, which has been blamed on unfair competition with China.

He said, “It is pathetic that the British government must go cap in had to beg the European Commission to prevent dumping of Chinese steel which is causing huge job losses.

“In a nutshell, it encapsulates why we must have control of our own destiny and a government directly accountable to the British people rather than an unelected Commissioner in Brussels.”

Over 5,000 steel employers and workers will take to the streets in Brussels today (15 February) calling for more protection from Chinese imports.