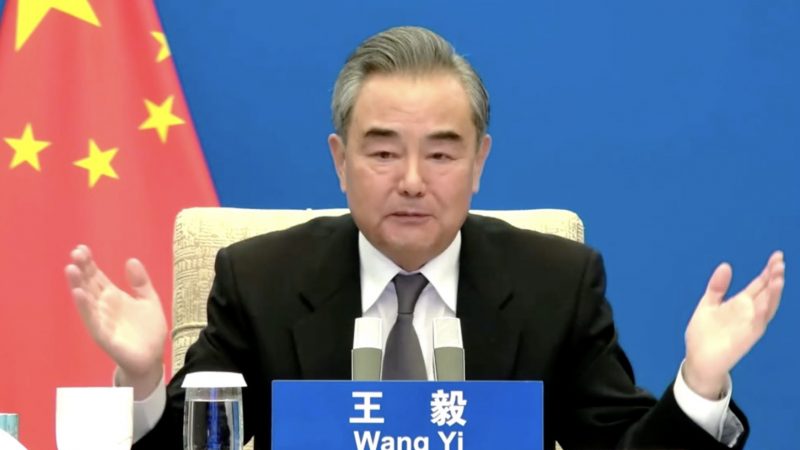 Chinese Foreign Minister Wang Yi has said that attempts by some in the EU to politicise trade issues by slapping sanctions on Beijing are “not acceptable and will lead nowhere” and has rejected the West’s accusations that China is perpetrating genocide on its Muslim minority.

Speaking at a talk hosted by the Munich Security Conference on Tuesday (25 May), Wang said Beijing’s leadership would “do everything we can to promote democracy and human rights in China”.

Activists and UN rights experts say at least 1 million Muslims, members of China’s Uighur minority, are detained in camps in the western Chinese province of Xinjiang. The US, Canada, and a number of European countries have described Beijing’s actions in Xinjiang province as genocide.

In early March, a team of independent UN experts declared that the Chinese government in Xinjiang was in violation of all 50 sections of the Genocide Convention and that it was “seeking to completely destroy” the country’s Muslim group, adding that “this global power is the architect of this genocide”.

China denies rights abuses in Xinjiang and says its camps provide vocational training and are needed to fight extremism.

“The Xinjiang-related issue bears on China’s sovereignty and security,” Wang told the event.

His remarks come less than a week after Brussels suspended the ratification of the EU-China investment deal until Beijing lifts its own sanctions on EU politicians.

The European Parliament had voted to freeze the ratification of the EU-China investment deal in May after Beijing’s tit-for-tat sanctions hit members of the legislature.

CAI not a ‘one-sided favour’

The investment pact was not a “one-sided favour,” Wang said, adding that stoking political confrontation and economic decoupling does not serve the EU’s interests. China remains ready to expand cooperation with Europe, he added.

“It has never come to our mind that the EU will put sanctions on us,” Wang said, questioning how a strategic partner could take such action.

Wang also questioned the legality of EU’s sanctions, saying they were not registered with the United Nations.

“I’m afraid the EU’s sanctions were not firmly grounded on realities. They were based on so-called evidence, but the EU never communicated with China whether that evidence was true,” Wang said.

“China-EU relations will not be derailed by one or two sanctions,” he said.

The sanctions reminded Chinese people “of the days when they were bullied by European imperialists,” he said.

“And as the Chinese government, we have our sovereignty to uphold. We have our national dignity to uphold […] We have to push back falsehoods and disinformation,” he added.

“China is a trustworthy partner of all countries, not a systemic rival locked in confrontation,” Wang said, adding that there would be no one-size-fits-all model when it comes to a country’s development.