EU condemns sentencing of Canadian for spying in China 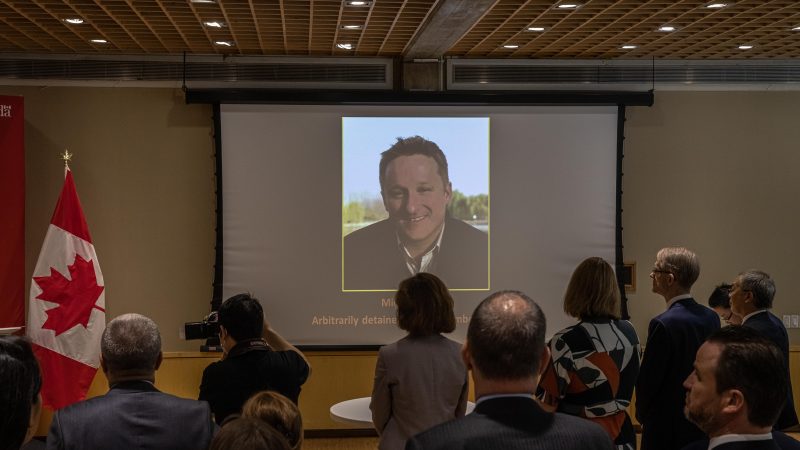 Diplomats gather at the Canadian embassy in Beijing following the verdict in the trial of Michael Spavor, 11 August 2021. [EPA-EFE / ROMAN PILIPEY]

The European Union on Wednesday decried the jailing of Canadian businessman Michael Spavor for 11 years in China for spying, saying he had been denied a “fair trial”.

“The EU stands in full solidarity with Canada in condemning the sentencing of Mr. Spavor. We are joint in the call for his release.”

“His right to a fair trial and due process, including the right to a public hearing, as guaranteed under international human rights law and China’s Criminal Procedure Law, has not been upheld,” she said in a statement.

He had not been allowed to see lawyers of his choosing and consular access to him had been “heavily restricted”, it added.

“The European Union has repeatedly urged China to abide by its international legal obligations to guarantee procedural fairness and due process of law for Mr. Spavor,” the statement said.

Spavor was detained in 2018 along with compatriot Michael Kovrig on what Ottawa has said are politically orchestrated charges after Huawei executive Meng Wanzhou was arrested in Canada on a US extradition warrant.

“He was sentenced to 11 years in prison.”

In a message relayed in a consular visit after the sentencing, Spavor said: “Thank you for all your support. I am in good spirits. I want to get home.”

“The verdict for Mr Spavor comes after more than two-and-a-half years of arbitrary detention, a lack of transparency in the legal process, and a trial that did not satisfy even the minimum standards required by international law,” he said in a statement.