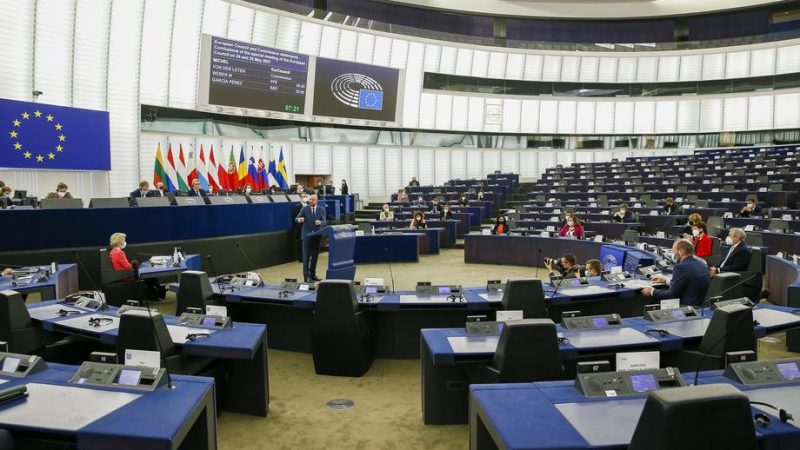 The European Parliament on Thursday (8 July) called for the EU to boycott the February 2022 Winter Olympics in Beijing unless China improves the human rights situation in Hong Kong and in the Xinjiang province which is home to the Uyghur Muslim minority.

The Parliament vote was yet another sign of souring ties between Brussels and Beijing, which deteriorated in May this year when the two sides imposed a series of tit-for-tat sanctions over China’s human rights record that effectively blocked the ratification of a bilateral investment deal.

The non-binding resolution passed with 578 votes in favour, 29 against and 73 abstentions and had the backing of all of Europe’s mainstream political groups, including the centre-right EPP group of German Chancellor Angela Merkel and the centrists Renew group of France’s Emmanuel Macron.

MEP’s called on the EU’s institutions and member states “to decline invitations for government representatives and diplomats to attend the Beijing 2022 Winter Olympics unless the Chinese Government demonstrates a verifiable improvement in the human rights situation in Hong Kong, the Xinjiang Uyghur Region, Tibet, Inner Mongolia and elsewhere in China”.

Full Olympic boycotts, when governments refuse to send athletes, officials, and spectators to the host nation, have happened a handful of times for a variety of reasons, most notably when the United States led a boycott of the 1980 Moscow Olympics to protest against the Soviet invasion of Afghanistan.

Experts, however, say it is difficult to measure the success of a boycott. Some have warned that in the case of the 2022 Beijing Olympics, it could make it even harder to gain concessions from China, saying participating countries should rather use the games to draw attention to China’s human rights abuses.

China’s foreign ministry has warned of a “robust response” to any boycott, something which could involve suspension of bilateral talks on international fora or economic pressure on companies acting as sponsors for the sports event.

“China firmly opposes the politicisation of sports, and the interference in other countries internal affairs by using human rights issues as a pretext,” Chinese foreign ministry spokesman Wang Wenbin said in a statement.

“Attempts to disrupt, obstruct and sabotage the preparation and convening of the Beijing Winter Olympic Games out of political motivation are extremely irresponsible, and will only harm the interests of athletes of all countries and the international Olympic cause,” he added.

The European Parliament resolution also condemned “in the strongest terms” the closure of Hong Kong’s pro-democracy Apple Daily tabloid and the arrests of its staff by Chinese authorities.

The acts were “yet another step by China in dismantling free society in Hong Kong and setting the definitive end of media freedom and freedom of expression there,” it said.

The deterioration of freedoms under China’s Draconian security law for Hong Kong amounted to a “human rights emergency”, the resolution said.

The Hong Kong security law had broken the trust between Europe and Beijing and “leads to a further erosion of Beijing’s credibility on the international stage”.

MEPs stressed “the need for the EU to take urgent and resolute action” and called on Brussels to draw up a fresh wave of sanctions against Chinese authorities.

“It is clear that many EU member states and also the European Commission are reluctant to speak out against China’s repressive measures in Hong Kong,” said Reinhard Bütikofer, a German Green MEP who is chairman of the European Parliament’s China delegation.

“The consensus on these issues in the European Parliament is very strong. We will fight to ensure that member state governments in Europe also take an unyielding stance,” said Bütikofer who helped spearhead the non-binding resolution.

The resolution also confirmed a earlier decision to block the EU-China investment deal as long as Chinese sanctions against MEPs and scholars were in place.

The pact has been defended as a long-overdue opening to China’s vast economy for European companies, especially by Germany and France.

European Trade Commissioner Valdis Dombrovskis announced in May that efforts to win approval for a proposed massive investment deal with China were effectively “suspended” after tit-for-tat sanctions were imposed by both sides.

China says the sanctions are a justified response after the EU imposed punitive measures against Chinese officials over allegations of human rights abuses.