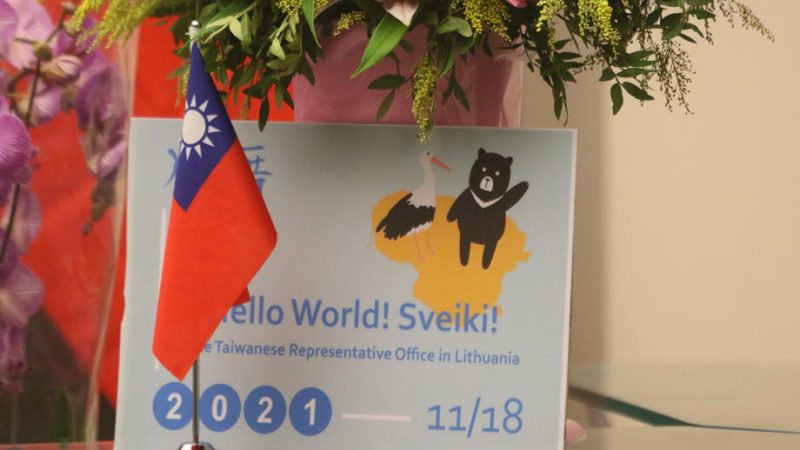 A Taiwanese flag sits on a desk at the reception of the Taiwanese Representative Office on the 16th floor at the Jasinskio gatve 16B in Vilnius, Lithuania, 18 November 2021. [EPA-EFE/STRINGER]

Taiwan said on Wednesday (5 January)6 it would create a $200 million fund to invest in Lithuanian industries and boost bilateral trade as it tries to fend off diplomatic pressure on the Baltic state from China.

Lithuania is under pressure from China, which claims democratically ruled Taiwan as its own territory, to reverse a decision last year to allow the island to open a de-facto embassy in Vilnius under its own name.

Taiwanese representations in other countries, except unrecognized Somaliland, are named after Taiwan’s capital Taipei.

China has recalled its ambassador to Lithuania and downgraded diplomatic ties, and is pressuring companies like German car parts giant Continental to stop using Lithuanian-made components. It has also blocked Lithuanian cargos from entering China.

US Secretary of State Antony Blinken referred to China’s pressure on Vilnius in a joint news conference with German Foreign Minister Annalena Baerbock after a meeting in Washington and vowed to work with Berlin and others against such “intimidation.”

Blinken said Germany and the United States agree on the importance of trans-Atlantic coordination on China “because it poses a significant challenge to our shared values, to the laws, rules and agreements that foster stability, prosperity and freedom worldwide.”

“We have an immediate concern about the government of China’s attempts to bully Lithuania … China is pushing European and American companies to stop building products with components made in Lithuania, or risk losing access to the Chinese market, all because Lithuania chose to expand their cooperation with Taiwan.”

Lithuania’s export-based economy is home to hundreds of companies that make products such as furniture, lasers, food and clothing for multinationals that sell to China.

The head of Taiwan’s representative office in Lithuania, Eric Huang, said the strategic investment fund would be funded by Taiwan’s national development fund and backed by its central bank.

“We will establish the fund as soon as possible and we hope this year we will have some tangible results … I can imagine the first top priorities will be semiconductor, laser (and) biotechnology,” he told a news conference.

Taiwan has redirected 120 shipping containers from Lithuania blocked by China into its market, and will take “as much as possible” more, Huang said.

Taiwan will also accelerate its approval process for Lithuanian dairy and grain exports into Taiwan and seek to link Lithuanian businesses into Taiwanese supply chains, he said.

“The US and EU refer to Taiwan as Taiwan in their official documents, and China keeps quiet,” he said. “China’s action seems to have targeted what it perceives as vulnerable country, for its political gains. But giving in is not the best way in dealing with bullies.”