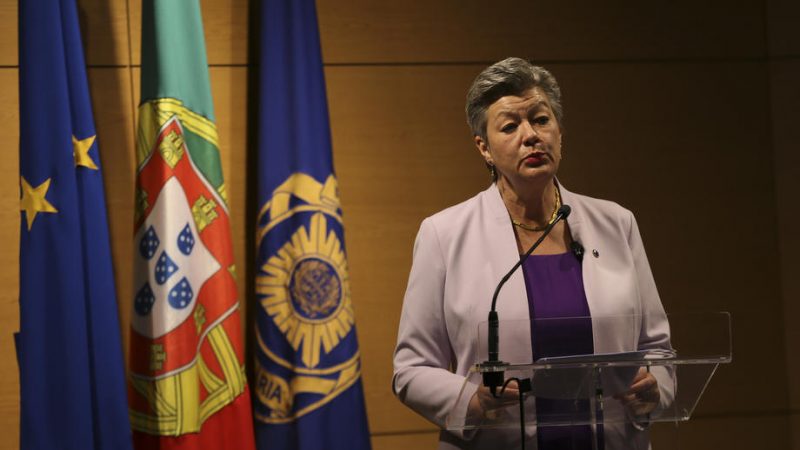 Johansson spoke at a press conference following a ministerial meeting on migration policies and border management on Tuesday (11 May), which was part of the Portuguese presidency of the Council of the European Union (EU).

“We are making progress, but I have to acknowledge that it is slow,” she said via video link at the end of proceedings that brought together 15 ministers from the EU and the regions of North Africa and West Africa (Egypt, Libya, Tunisia, Algeria, Morocco, Mauritania, Senegal and Niger).

“Nothing is blocked,” the Commissioner said, noting that in recent times, there have been “good signs” of understanding on asylum and migration, which could mean “further progress”.

Recently, the European Commission presented a proposal for a new EU strategy on voluntary returns and reintegration, strengthening the role of Frontex, the agency responsible for external borders, in this area.

At the same press conference, Portuguese Interior Minister Eduardo Cabrita acknowledged that the new pact “is one of the most complex items on the European agenda”.

Cabrita said that there has been “significant progress on a technical level” and that the Portuguese presidency has been focused on “bringing the positions of member states closer together” in the balance between the management of external borders and “solidarity with countries under greater pressure”.

On the “real tragedy” of migrants trying to reach Europe by crossing the Mediterranean – where nearly 500 people have died since the beginning of the year – Johansson stressed that “to save lives, the most important thing is to prevent these dangerous journeys”.

To prevent them, she stressed, it is necessary to “improve living conditions and the protection of people, in Libya for example, to combat networks and traffickers and support voluntary return”.

There was a “significant convergence of messages” between European and African leaders gathered today at the Belém Cultural Centre in Lisbon to “deepen political dialogue,” she added.

The Commissioner recalled that “many African countries are simultaneously the origin, transit and destination” of migratory flows and stressed that “their knowledge and experience is crucial”.

It is also important to ensure that the EU does not lose sight of the fact that it is not the only place in the world with a large number of migrants.

“We are agreed on the need to promote legal migration mechanisms”, and to “articulate efforts” to combat trafficking networks, Cabrita added, adding that the participants at the meeting were “committed to prioritising cooperation between the EU and Africa”.