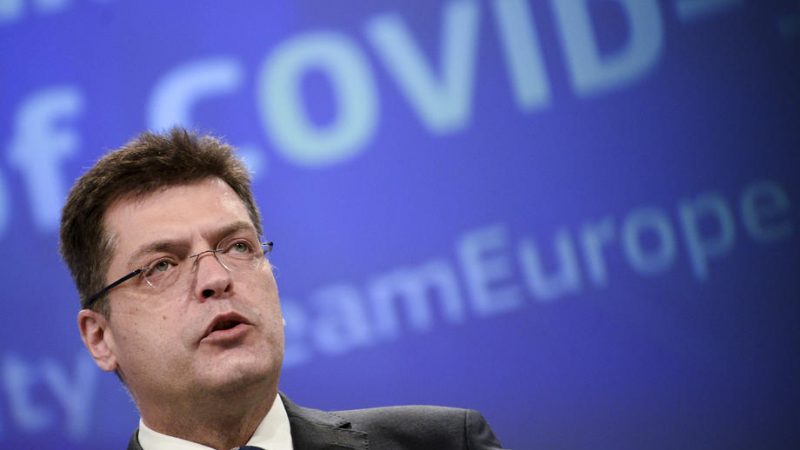 The Slovenian commissioner, who is responsible for crisis management, noted that some Slovenian senior government officials responded with harsh attacks and insults to what he said were his well-meaning warnings. [EPA-EFE/JOHANNA GERON]

European Commissioner Janez Lenarčič has rejected an accusation by Prime Minister Janez Janša that he was acting against Slovenia’s interests saying, “Slovenia is being harmed by those who undermine the rule of law and media freedom,” rather than those who warn of such conduct.

“Nowhere and never have I advocated for European funds to be made conditional, limited or even withdrawn from Slovenia in any way. Quite the opposite, I hope and wish something like that will never happen,” said Lenarčič as he arrived for an EU ministerial at Brdo estate on Friday,

“That is exactly why I have been warning of certain actions by the government that could bring Slovenia in a rather unfavourable position when it comes to tapping EU funds,” he added.

The Slovenian commissioner, who is responsible for crisis management, noted that some Slovenian senior government officials responded with harsh attacks and insults to what he said were his well-meaning warnings.

“I find such a manner of communication unacceptable so I don’t wish to respond to such outbursts,” he said in a doorstep statement as he arrived for an informal meeting of the General Affairs Council.

“However, I would like to emphasise that Slovenia is being harmed by those who undermine the rule of law and media freedom, rather than those of us who warn of such conduct being problematic.”

Lenarčič has faced a barrage of criticism in social media in recent days over his comments in response to the latest Rule of Law Report issued by the European Commission. He said the message of the report was that there were serious concerns with respect to the rule of law in Slovenia, in particular about independence of prosecutors and media.

He said the Commission sent out a clear message that the financing of the Slovenian Press Agency (STA) could not be made conditional by undermining its independence.

In response on Twitter, Prime Minister Janša described Lenarčič’s comments as political, adding that Lenarčič had joined some individuals on the Commission who were trying to make EU recovery funds for Slovenia conditional. “Luckily he remained a minority. It’s the first known example of a commissioner trying to harm his own country directly,” Janša tweeted.

The rule of law ranks as one of the priorities of Slovenia’s presidency of the Council of the EU and one of the topics of today’s informal session of ministers of European affairs in Brdo pri Kranju, along with discussions on boosting the bloc’s resilience to crises, EU enlargement and the Conference on the Future of Europe.